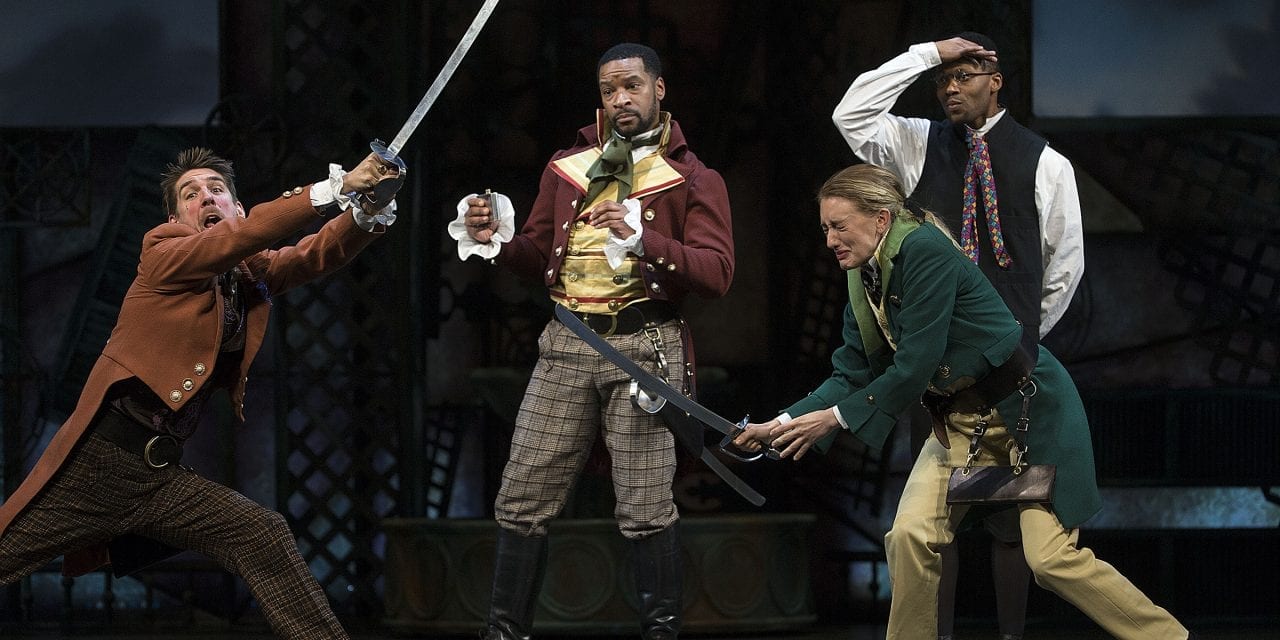 SALT LAKE CITY — Taking my seats at Pioneer Theater for Twelfth Night, I saw a promising lovely model ship in the center of the stage. Surrounding the stage was a golden frame of shutters, perhaps foretelling the storm at the beginning of the play. (A hurricane?) As the action opened, the little ship sank and the set (designed by G. W. Mercier) dissolved into an impressive storm scene aboard, clearly echoing The Tempest. Sinking along with the ship was the energy level in this production, drained even further by the slow tempo of the script’s songs (composed and sung by Richard E. Waits).

That shipwreck separates Viola (played by Grace Morrison) from her twin brother Sebastian (played by Zach Fifer). Each believes the other drowned. Viola disguises herself as Cesario, taking service with Count Orsino (played by A. K. Murtadha), with whom she promptly falls in love, while carrying love messages from him to the Countess Olivia (played by Kelsey Rainwater). Olivia falls for Cesario, of course, and confusion abounds until the late re-appearance of Sebastian to allow all the confusion be resolved.

There is a subplot (or two, rather) involving the Countess’s entourage. Sir Andrew Aguecheek (played by Conner Marx), is in love with Olivia, as is her majordomo, Malvolio (played by David Andrew Macdonald). Olivia’s uncle, Sir Toby Belch (played by Kenajuan Bentley), and her servants Maria (played by Susanna Florence), Fabian (played by Freddie Bennett), and the fool Feste (played by Richard Waits) play these hopeless lovers for laughs, providing the only energy in this production. 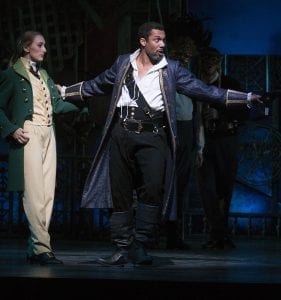 Grace Morrison as Viola and Murtadha as Count Orsino.

In addition to the slow pacing, the cast never seemed to generate enough interest in each other to justify their words. I could not believe Orsino’s “love” for Olivia, nor hers for Cesario/Viola, nor Cesario’s for the Count. I certainly grasped the animosity of the Countess’s entourage for Malvolio, but frankly it seemed out of proportion to that poor fellow’s transgressions. Malvolio has to be so overbearing, so obnoxious, and so full of himself that the others are driven to take him down a few pegs. Macdonald’s Malvolio didn’t inspire that level of animosity.

The success of Twelfth Night depends on passions strong enough to transcend the considerable barriers between individuals. These include the mourning period of the Countess Olivia, the camouflage of Viola as a man, and the class barriers between servant and master or servant and mistress. In Pioneer’s production, none of those human passions ever approached the intensity needed to make the plot comprehensible. At the end, I was left wondering what all the fuss was about. 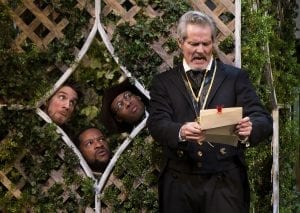 In this case, I was also left scratching my head about director Larry Carpenter’s decision to set the play at Mardi Gras in 1812 New Orleans. Many directors update the setting of Shakespeare‘s plays, and productions often profit by the updating, but there has to be a reason for it. In his director’s note in the program, Carpenter explains that the play begins “on the first night of Epiphany and the beginning of Mardi Gras – on the twelfth night.” This explanation exhibits some confusion. Epiphany doesn’t “begin,” but simply is, 6 January (the traditional date for the arrival of the Magi in Bethlehem). Likewise, Mardi Gras does not have a “beginning.” Again, it is one date, always the day before Lent begins and never earlier than 3 February. Lent does have a beginning, but it is completely unassociated with Epiphany.

Epiphany does have a Feast of Fools, which has a superficial resemblance to the masques and tribal celebrations of Mardi Gras. It is further true that Mardi Gras in New Orleans is surpassed in exuberance perhaps only by Carnival in Rio de Janeiro, so perhaps that is what inspired Carpenter. Certainly PTC had the costumes for it: costume designer G. W. Mercier decks out the revelers and the secondary characters in a most colorful and impressive array, rather like peacocks and parrots strutting about the stage.

The choice of locale and time raises serious problems, of course. Should the audience believe that New Orleans was ruled by a duke, or count, in 1812? And Sebastian’s declaration that he comes from Messaline, would be even more obscure to a resident of New Orleans than it was to Shakespeare’s groundlings. If Illyria is going to become New Orleans, why not change Messaline to, say, Grenada?

Possibly it is time to recognize the strength of William Shakespeare’s plays as they stand, not needing modernizing or updating, just solid characterization and acting. Sadly, the trend seems to be the other way.

The Pioneer Theatre Company production of Twelfth Night plays at the Simmons Pioneer Memorial Theatre (300 S. 1400 E., Salt Lake City) Mondays through Thursdays at 7 PM, Fridays at 7:30 PM, and Saturdays at 2 PM and 7:30 PM through April 14. Tickets are $25-49. For more information, visit www.pioneertheatre.org. 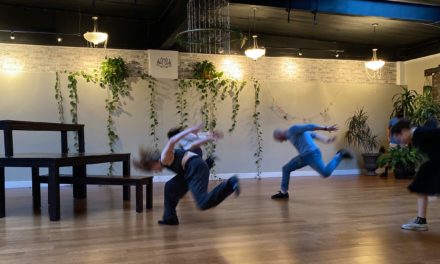