NEW YORK CITY — Year Three of BroadwayCon, founded by Broadway actor Anthony Rapp, was unique for Utah Theatre Bloggers Association because I had the exciting opportunity to moderate a panel with three other Utah natives, Megan Guiterrez, Johnny Hebda, and Holly Harmon, about the wonder things we do in Utah to build out theatrical community.

The main convention was held from January 26-28 at the Jacob Javits Convention Center, and new this year on Thursday the 25th was the first ever BroadwayCon Industry Day, where panelists were gathered to speak to people who work or desire to work within the theatrical industry could learn about ways to improve, as well as have time for networking and building new connections.  As an attendee of industry day, I was able to meet with other critics, discuss theatrical criticism in general, and have meaningful discussions about what directors and actors look for when they are reading reviews, and how we can help them improve their productions. 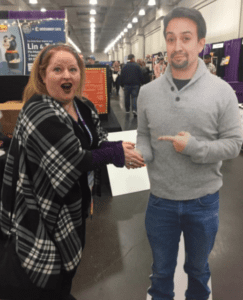 Just as in previous years, the convention offered a range of opportunities, from workshops where singers and dancers had the opportunity to work one on one with a Broadway star, to autograph and photograph sessions, to panels about favorite shows, to singalongs, costume contests, and more.  There is also a vibrant marketplace with theatrical merchandise, information on how to get an agent, get a show produced, published, or heard. Stars were also always around the corner, and it was surprising and exciting for attendees to find their favorite stars just being part of the crowd.  One of my personal favorites was the two cardboard Lin Manuel-Mirandas, because there is just never enough Lin to go around.

BroadwayCon had several improvements from the last two years, including allowing people to tweet questions in the larger panels, changing the layout of the mainstage to be more audience friendly, and improving the convention’s app. Volunteers and staff are getting better at directing traffic and offering a variety of panels on different topics.  Some of the most interesting for me were of course the panels on criticism and activism, but others I spoke to loved the panels on learning about acting, writing, producing, sound design, and more. 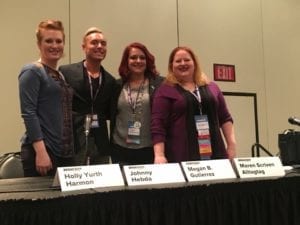 Our panel, entitled “Building Theatre Community in Your Home Town,” had several audience members who were interested in building criticism, theatre companies, meetup groups, and opportunities for actors and writers. Our panelists enjoyed speaking about the wonderful work we do here in Utah during the panel and had many discussions with attendees after the panel was over. I have received several emails from people in attendance who have checked out the UTBA website and other resources we gave them, and they were impressed with the quality of theatre that Utah has.  The support for the arts is something that we can be proud of, and as UTBA is celebrating its 8th anniversary, I look forward to many more years of promoting the arts in our area.

While in New York I had the opportunity to see several productions.  One of the best was a play entitled The Play That Goes Wrong, which I am hopeful will make its way onto one of our Utah stages soon.  It is a comedy piece that won a Tony for set design with good reason. The humor that is presented by the actors and the set is unmatched, and I believe that this show would be an excellent fit for Utah audiences.  Similarly, SpongeBob the Musical was surprisingly not horrible, and would be a very successful production in our area.  Finally, the exquisite Come From Away was a beautiful telling of what can happen when a community comes together.  I have witnessed this coming together in our community many times and found a great deal of magic and love in this production.

The convention continues to grow and have minor issues.  Many people who have not attended a fan convention will not be used to the long lines, prices, and changes in organization.  The vendors have grown this year, but I continue to hope for even more vendors to offer products and merchandise specific to the theatrical loving community.

This convention has become a highlight for me each year, but this year it has also reminded me that one of the best parts of my love of theatre is knowing that there is a vibrant community right here where I stand.  That we have a mix of shows that are for the whole family and shows that touch on subjects that cause you to think and grow.  I also love that we have myriads of affordable options of live entertainment that is readily available.  I left New York City with a stronger commitment to continue to be a support to the arts here in Utah, and all the talented people that make my home a wonderful place to be.

The dates for next year’s BroadwayCon have not been announced yet, but watch the websitewww.broadwaycon.com for news. Meanwhile, as always, make sure and support the theatre and arts right here in our state. The arts matter.