SALT LAKE CITY — An extremely talented group of dancers and actors, called Rakan, are performing their debut show, Phantom Map, at the Fringe Festival. This performance included Japanese Butoh dance as well as a script that was intriguing and sinister.

The company’s expertise in the Butoh dance style was immediately apparent, and each movement was accented by their opening costumes which consisted of long robes, three red, one white, and scary-looking black gloves which lengthened each finger by at least double to a point. One performer wore a mask, and the others had black eye coverings. With great synchronization, macabre stuttered dance movements and changing tempos, I was engrossed in the cultural experience. Even when one dancer lost their eye covering, they made it seem like part of the dance and masked it well. Unfortunately, there was an intense smell of body odor as these outfits desperately needed washing.

After the dance scene, the show changed to more of a play with a riverboat captain played by Michael Watkiss, who had been in the white robe and mask during the dance scene. His acting was just as fantastic as his dancing, and this proved to be true for each performer. Erica Carvalho played a Japanese Master, and her student, played by Stephen Jones, had a well-written scene about learning and protecting people. The two characters found a marauder, played by Paul Etuk, who was planning to thieve and kill many on board, and they prepared to confront him. As Carvalho and Etuk conversed, I got goosebumps from Etuk’s perversely sinister delivery of how he had purposely left previous wholesome careers to pursue the only thing that brought him peace and joy: murder. Carvalho also did a wonderful job of expressing the pain felt at sending Etuk overboard to his death and a place in Japanese culture known as “the Bardos” which is the place one passes through before their next reincarnation. 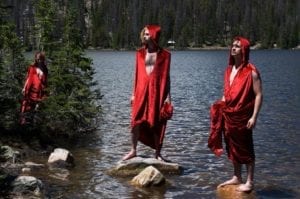 Rakan did an amazing job at depicting this in-between place, through the transition from Etuk’s drowning to his expert floating through strange phenomena, which included the other actors seeping out of the black background into the eerily lit space. The music was threatening, though it sadly had technical issues as it kept cutting out, though the first time this happened, it added to the intensity, and I wondered when lightning would strike, but no such luck.

The ominous underwater dance continued for some time with various movements partnering two or all four dancers in chaotic actions that seemed to have a modern dance style involved. It alternated between the four tumbling together in mostly slow motion in the center and all moving slowly and tensely along the edges alone in different poses. I was so scared to see what would happen to Etuk in this space where it seemed the other dancers were out to get him, but he just kept floating despite the random escalations of ferocity between the characters. I hate to have to criticize this section because the dance was VERY cool, but the costumes were…distracting. I think a few dance belts could have easily kept everything in place.

The show’s last scene was set in present times, with Etuk preparing for a speech. The set had a simple table and chair and a wall mirror held up by Watkiss in his white robes from the beginning of the show, whose presence brought a sense of foreboding. By now it was apparent the story was following Etuk on his journey between lives and he had reached his next reincarnation as a modern-day poet or writer and was very nervous about giving a presentation. Etuk is desperately failing with his tie while trying to practice his speech when Carvalho appears and offers to do it for him. She then looks at it and refuses, stating, “It’s not me who doesn’t know how to tie a tie,” which was so obviously false. I thought the scene was poorly written, as no woman would offer to fix a tie if she didn’t know how to do it. I had to roll my eyes. And the whole scene was difficult to listen to because Etuk was stuck with this crappy tie that he still had to figure out all by himself, and she just sat there asking him questions thus distracting him more from the actual tying process. Oh, the pain!

But, overall this was an extremely well-performed show that needs just a few more adjustments to be perfect. There was a general creepiness that enhanced the art of the performance, and made it feel very “fringe.” Rakan is a very talented group that works powerfully together in new and unique ways.