Run to see HCTO’s delightful SEE HOW THEY RUN 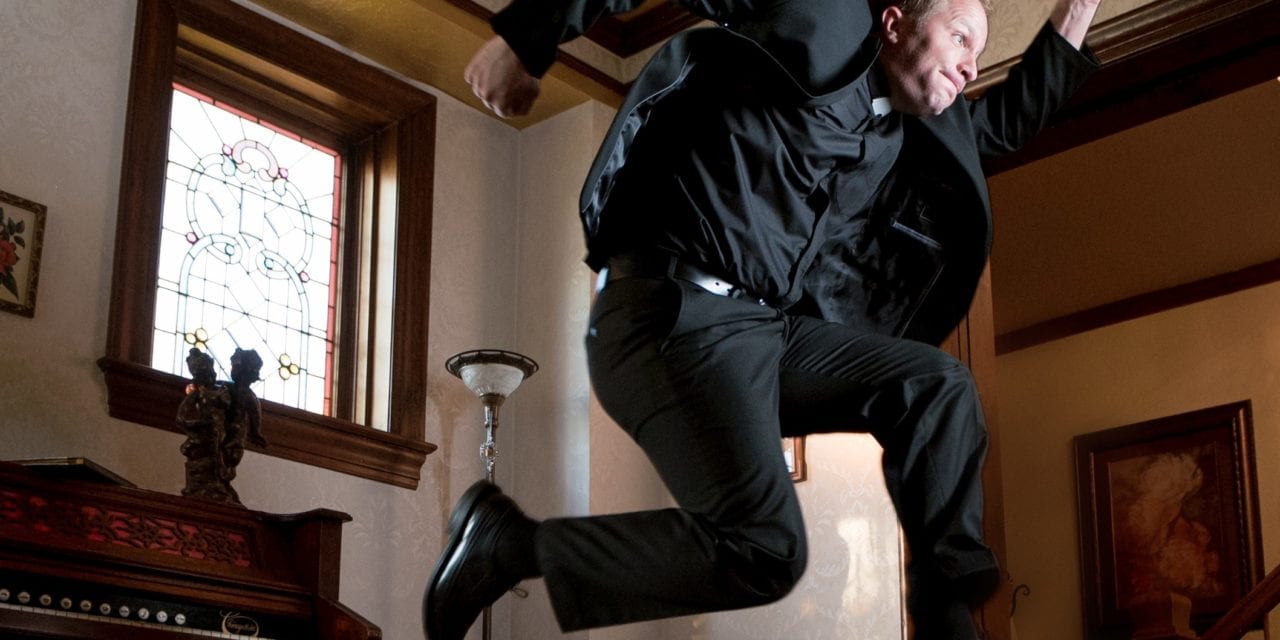 OREM — Fewer scripts evoke a feeling of complete chaos than See How They Run by Philip King.  It is a hilarious, fast paced farce involving mistaken identities, a couple of clergyman, a soldier, a communist spy, a bishop, a cockney maid, an old maid who gets drunk for the first time, and an American actress turned the vicar’s wife. The movement and dialogue are so rapid that watching this show is like watching a pea and walnut shell game. I had not seen a production of See How They Run in several years, and, because I love the script, I jumped at the opportunity to attend Hale Center Theater Orem’s production, directed by Barta Lee Heiner.

I was eager to see how the set for this production would be designed for theatre in the round. Set designers Bobby Swenson and Cole McClure created an cozy vicarage home. Warm wood tones were used for the floor and furniture. The wallpaper was a mustard yellow with a black stenciled design. The main floor hosted a sofa, several chairs, some small end tables, a coffee table,  and a liquor cabinet. All four aisles were aptly used during the production. One leading to the kitchen, one upstairs, another to the front door and the final to a small platform with a tea table and a coat closet. The set was cozy, functional, and wonderful for the many chase scenes that ensue during the production. There are so many delightful moments incorporating people hiding in the coat closet, that I felt bad for the seats that can’t see into the closet as well. This is just one of the challenges of staging theatre in the round. However, with a production this fast-paced it was fun to really feel like I was in the thick of the scripted chaos.

There isn’t a dull character in this production, and I could easily write about the performances of each actor as they were all excellents. However, I will only write about a couple. I’ll start with Miss Skillon, played by Carolyn Hartvigsen. Miss Skillon is the classic nosy old maid, except that she isn’t really that old. She’s a devoted parishoner to the Reverend Toop and is quick to tell him the latest gossip—that she’s instigating—about his wife. Hartvigsen did an excellent job of relaying her disapproval of Reverend Toop marrying an American actress. The way she twanged out and nasalized “American actress” oozed disgust. She is such an old biddy gossip that when Mrs. Toop accidently knocks her out, I couldn’t help but cheer. Act II opens with the discovery of a very drunk Miss Skillon. I was impressed with how easily Hartvigsen became a rag doll that was so manhandled by other characters trying to hid and dispose of  this inebriated woman. She in often unceremoniously stuffed into the coat closet, and after escaping, and appearing a mad woman, is hauled back to her “kennel” by the maid, Ida. Ida, played by Brittany Stahly, is another delightful character and is pivotal to the story. She might not understand everything that’s happening but she certainly knows more than most, as a good maid would. She is the main keeper of the drunk Miss Skillon and of Mrs. Toop’s secret outing with her old theatre buddy Clive Winton. One of my favorite Ida scenes is played out with Clive (played by David St. Julien). Ida has a thick Cockney dialect that is hard to understand upon first encounters. As she tries to introduce herself to Clive, it is reminiscent of Jane introducing herself to Tarzan as Ida slowly and loudly says, “I’m IDA!” Stahly did well at playing flirtatious with Clive and scrapping and formal with the Bishop of Lax (played by Daniel Hess). As the Bishop became more confused and anxious about the situation he had landed in, Ida became more frank and blunt with him, dropping all formalities as she hauled Miss Skillon back to the closet. Daniel Hess was superb in his portrayal of the Bishop of Lux. He was loud and in charge, but he become befuddled and confused as he is thrown into the chaos that has enveloped the vicarage. The audience also saw his softer nature as Mrs. Toop (played by Jessica Pearce), his niece, is trying to hid three people in the closet so her uncle won’t assume anything scandalous. She tells him that it’s the cat hiding in the closet and she’s about to have kittens. Hess became all sweet and excited as he wonders if the “cat” has already had her kittens.

The chemistry of this cast was overall very well balanced. From the disdain between Miss Skillon and the other two women, to the loveable old friendship between Mrs. Toop and Clive. I felt that Heiner did fantastic work with the directing of this production. The chaos felt chaotic, but never out of control. The chase scenes were quickly paced, and I especially enjoyed the characters leaping over Miss Skillon and then leaping over the spot where she had lain. I also felt that no part of the audience was neglected in the blocking of the scenes. The production was well rehearsed without feeling canned.

All the technical elements of this production were well done and time period (1940’s) appropriate. The costumes, designed by Kris Hansen-Call, were exactly as they needed to be. Ida’s maid headpiece in the opening scene appeared really tall to me and I kept trying to figure out it was a birthday crown underneath. It definitely relayed the message that she was a maid, but it seemed a tad too much for me. However, Ida only wears it for that first scene and then spends her time in a lovely, but non-showy dress in earth tones for her night off.

I’d had a crazy day before attending this production and I left feeling like my day hadn’t really been that crazy. This show was perfect to shake up the mundane and have some good hearty laughs. The high pace action of the show makes this a fun show for a wide variety of ages. I highly recommend this show for a fun night out with friends or family.

See How They Run plays at Hale Center Theater (225 West 400 North, Orem) Mondays through Saturdays through September 24th at 7:30 PM, with matinees at 3 PM on Saturdays . Tickets are $17-23. For more information, visit www.haletheater.org. 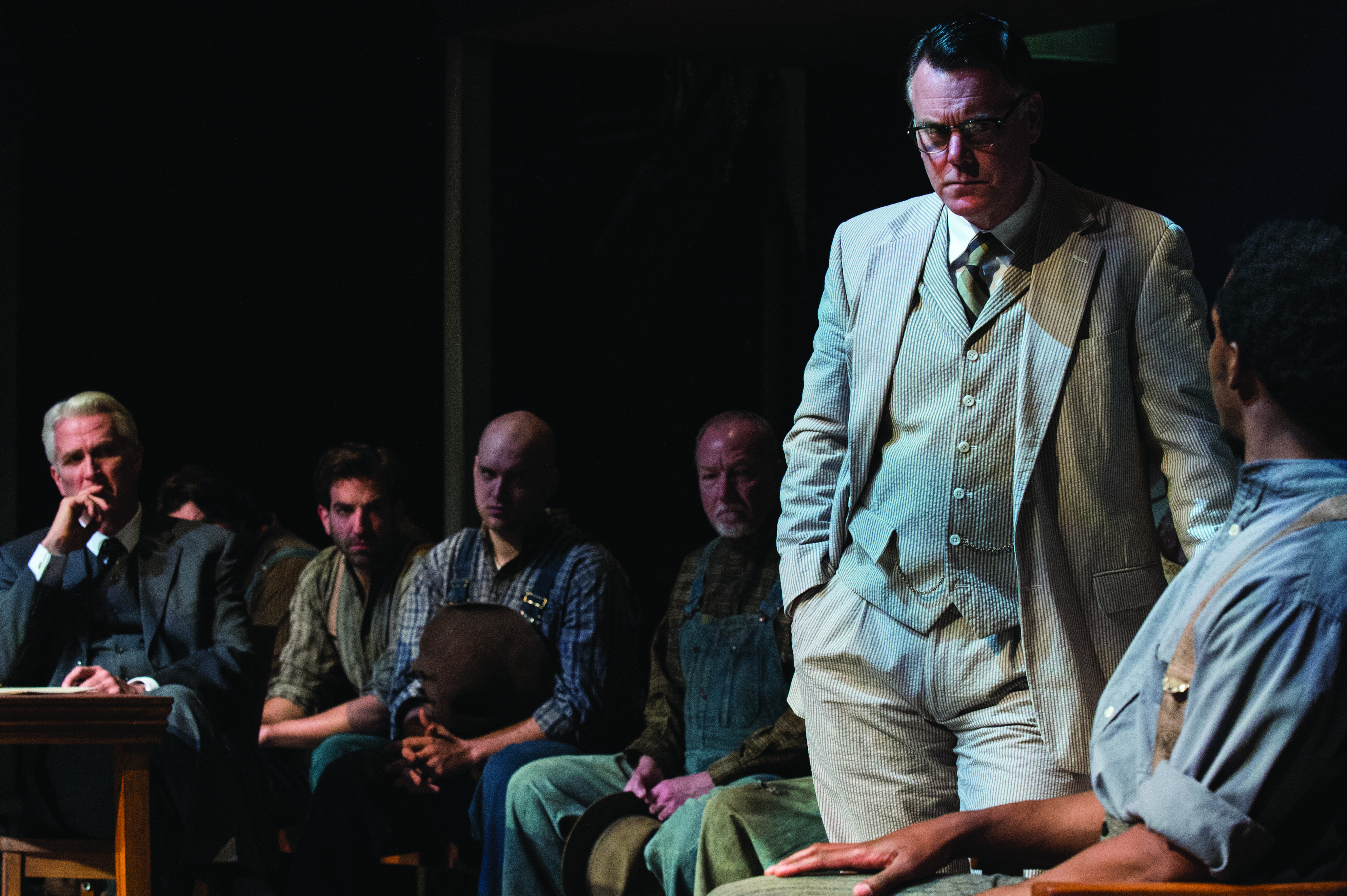 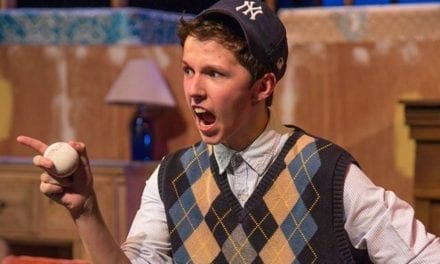