Creekside’s OZ has charm in its setting and its actors

CEDAR HILLS — In Patrick Shanahan’s Oz, L. Frank Baum is having trouble finishing up his inevitably-famous novel, The Wizard of Oz. But when a scraggly girl breaks into his house, he uses her to act out the events contained in his story. With the help of Dot and his housemaid, Bridgey, Baum is able to break through his writer’s block and find the ending to his tale. In the process, he helps the strange girl remember her home, and encourages her to find home just as Dorothy does.

The setting of this theatre plays a critical role in some of the successes and failures of this particular performance. An ampitheatre, nestled between trees and separated from the audience by a creek, offers an intimate and vibrant energy for the production to draw upon. There was little noise pollution to distract from the performance, and construction of the stage allowed for me to stay in the world of action.

Though it was enchanting as a setting, the location led to some problems, namely sound and light. Some actors could be heard easily, though more grounded acting seemed to be the sacrifice for clarity in speech. Acting, in general, landed on a more hypertheatrical note and didn’t necessarily resonate from a place of earnestness. I also don’t know that a completely emotionally grounded place would have resonated with the script. Shanaham presents the story of Dorothy in a highly narrative style, perhaps more suited to a reader’s theatre than a fully realized production. It is a story that I was familiar with, however, and so profile-heavy blocking meant that even though I missed bits of dialogue, I was still able to follow the story. Natural lighting meant I was able to see the first act very well, though the second act was noticeably harder to see. The lighting system provided worked enough, but I still strained to see the actors’ expressions. Moreover, the idea to use green-tinted glasses for moments in the Emerald City was a fun one, but meant that I couldn’t see anything more than outlines moving on stage the second time this technique was used. (The first time worked wonderfully!)

The creek itself was a fun component the atmosphere, but because the set was established as an interior, I wondered why the director (Brooke Grant) chose to have the actors cross the threshold of the stage onto the water. Additionally, use of the 4th wall seemed inconsistent. Baum addressed the audience directly and multiple times, whereas Dot made vague references to the audience. Blocking favored facing upstage and profile views, and I lost some lovely moments because an actor’s back was turned to the audience.

Yet, the few of technical elements worked quite well. Costuming lent to each character’s story, and I liked the small pieces pulled in to represent the different characters of The Wizard of Oz. Musical choice set a proper tone between the acts, and I liked the establishment it created for the play.

Most of my qualms with this production stand from the script itself. As mentioned before, this script feels more suited to reader’s theatre, or a podcast. Having actors act out the story, and in a very simplistic format, didn’t necessarily engage me. I didn’t find this piece to be driven, and though charming in itself, lacked momentum because of its ease. The pacing was slow, pauses indulgent, and kept a languorous pace. Tightening up the lines and creating clearer transitions between the start of the play and intermission might have pushed the tempo along some. A lack of any real tribulation for the characters made overcoming obstacles quick and unimportant. Finding the name for Baum’s protagonist, finding his ending, getting the strange girl to go to her family was resolved very easily, and I would have liked to see the playwright delve into the characters behind the story more, rather than re-telling The Wizard of Oz. Additionally, Shanahan’s script left questions left unanswered. I wondered why Baum would welcome a stranger that broke in to his home so readily and how all three people seemed to improvise a new story so cohesively.

All that being said, it was still very charming. I think this production is geared more fittingly towards young audiences, and indeed, the younger children watching the show seemed to be very engaged. The actors provided a light-hearted performance that was fun to watch. Jordan Long as L. Frank Baum remained a gentle, kind presence with an eccentric penchant for crafting stories. His ability to differentiate between the different characters was fun to watch, and I liked seeing the fun he was having on stage. Physicality and tonal affectations allowed for him to be many different characters, layered on top of his performance as Baum. I enjoyed his time on the stage. Jasmine Fullmer as Bridgey brought ample energy to the stage with her performance, and I missed the moments she wasn’t on stage. I quite liked her in the role, and the physicality she brought to the Wicked Witch of the West stole the show for me. The cast did seem to find a cohesion. Energy balanced between the three, and they worked well with each other in the story-telling aspect.

In the end, while I think the company has some technical refining to do, the production played well enough. I’m always excited to see new companies foster within Utah Valley, and hope that growing audiences will attract growth for the company. The concept is lovely; outdoor theater is one of my favorite things, and the setting is incredibly idyllic. Oz is a charming little piece, one I’d recommend for young audiences or for a family night. 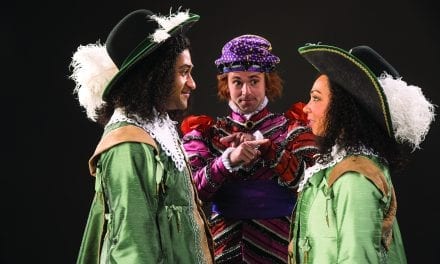 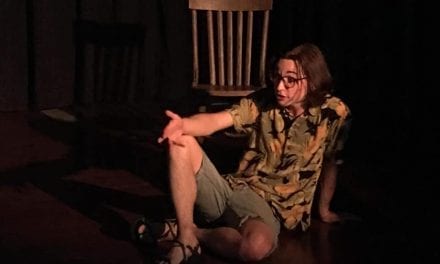