OREM — If you’re looking for something fun and entertaining to do out in the fresh air, the Grassroots Shakespeare summer tour is where you need to be. This year’s production of The Tempest by William Shakespeare has a fun and nuanced production with exciting characters and lots of action. Grassroots involves the audience in their shows, encouraging boos for the bad guys and cheers for the good. The show is family-friendly, and even though the language and the revenge themes and the politics might go over their heads, there’s plenty for kids to enjoy as well.

But Shakespeare in the park is a long standing tradition, and Grassroots has been at it for years. This year they’re trying something new by adding a musical production to their repertoire. The Fantasticks by Tom Jones and Harvey Schmidt (and adapted from a play by Edmond Rostand) is an exciting and magical musical story about boy and a girl, Louisa and Matt, and their fathers who build a wall to keep the two young lovers apart. It has a small cast with no chorus, and Grassroots involves the audience for this one as well. The story is highly symbolic but also representative enough for the children to follow. The production was engaging enough that there were several kids who wandered over from the park equipment to watch the show.

Perhaps the most difficult character to play in The Fantastiks is Louisa because she seems so simple, she is written to sound very childish to the point where she even announces that she’s “completely insane.” But she’s also the fulcrum of the entire story line. It’s true that it takes two to tango, but she has dreams and eccentricities and a fascination with her own self long before Matt arrives and delivers his first line: “There’s this girl.” I’ve seen several productions of this show, and Amber Dodge Tinney was my favorite Louisa. She balanced the light airy naivete and the dark self-obsession that’s essential for a compelling Louisa.
Benjamin Henderson played a brazenly flippant El Gallo. There were so many signals that he was a villain that the children in the audience would boo him, but the other characters in the play couldn’t see it, or chose not to. It made me question if there was anyone in my life who wasn’t good but I didn’t want to see it. And isn’t making people think the first goal of art? The Wall is usually a pretty passive character, acting more like a human prop than a character. But Carter Walker‘s interpretation was heavily involved and magically charming.  He was engaged with the rest of the cast and his character was multi-dimensional and interesting, even though he never spoke a word.
The part of Mortimer was supposed to be played by Paris Abigail Moore, but she was in a car accident earlier that day.  Makenna Tinney stepped in at the last minute and did a wonderful job. If they hadn’t announced it at the beginning, I never would have known that she hadn’t been in the cast from the very beginning.
The whole cast worked so well together for both The Fantasticks and The Tempest.  They have the energy and chemistry of troop of traveling players who live in the Grassroots trailer instead of going home to their families at night.  Watching the two shows back to back really emphasizes this, seeing them work together in two different stories over just a few hours was exciting.  They kept their enthusiasm and energy the whole time, even though they did two shows with almost no break in between.
The portable stage set against the open air and the giant gorgeous trees was perfect for both of these shows. Both stories are ephemeral, and while they were both very well rehearsed, they have a feeling of controlled chaos, a wildness that made it seem strange to me that I’d ever seen these shows indoors before. It was a very fun experience and it was so good to spend an evening outside in one of Utah’s beautiful parks.
The Grassroots Shakespeare Company production of The Fantasticks plays at various dates and times in Grand, Salt Lake, Utah, Wasatch, Weber, and Grand Counties through July 8. All performances are free (with a suggested $5 donation). For more information, visit grassrootsshakespeare.com. 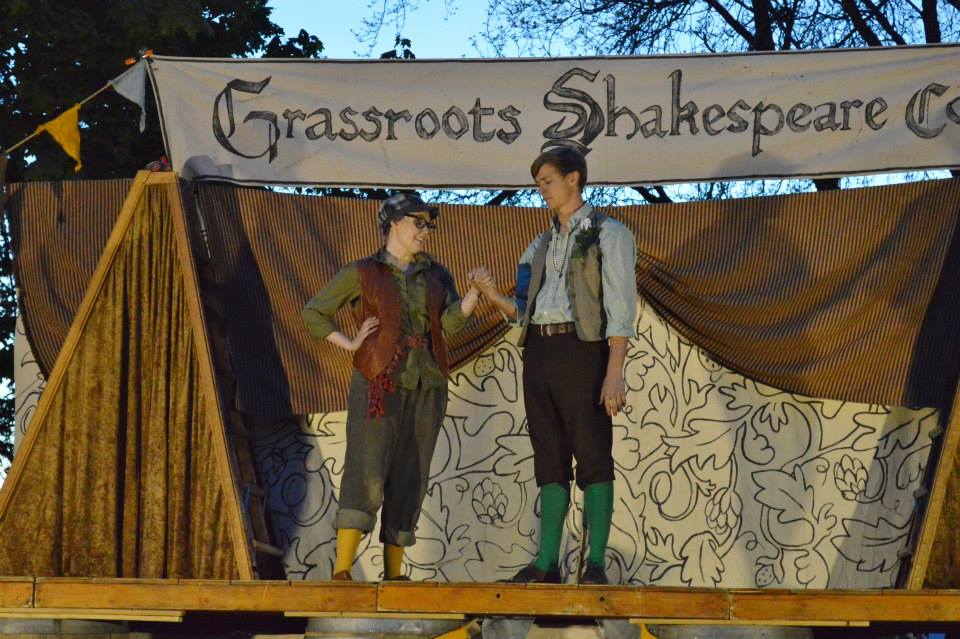 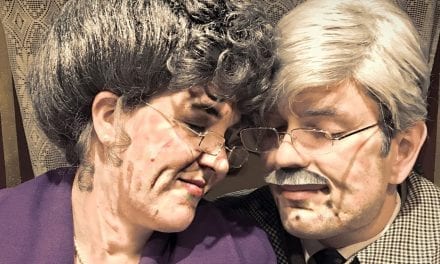