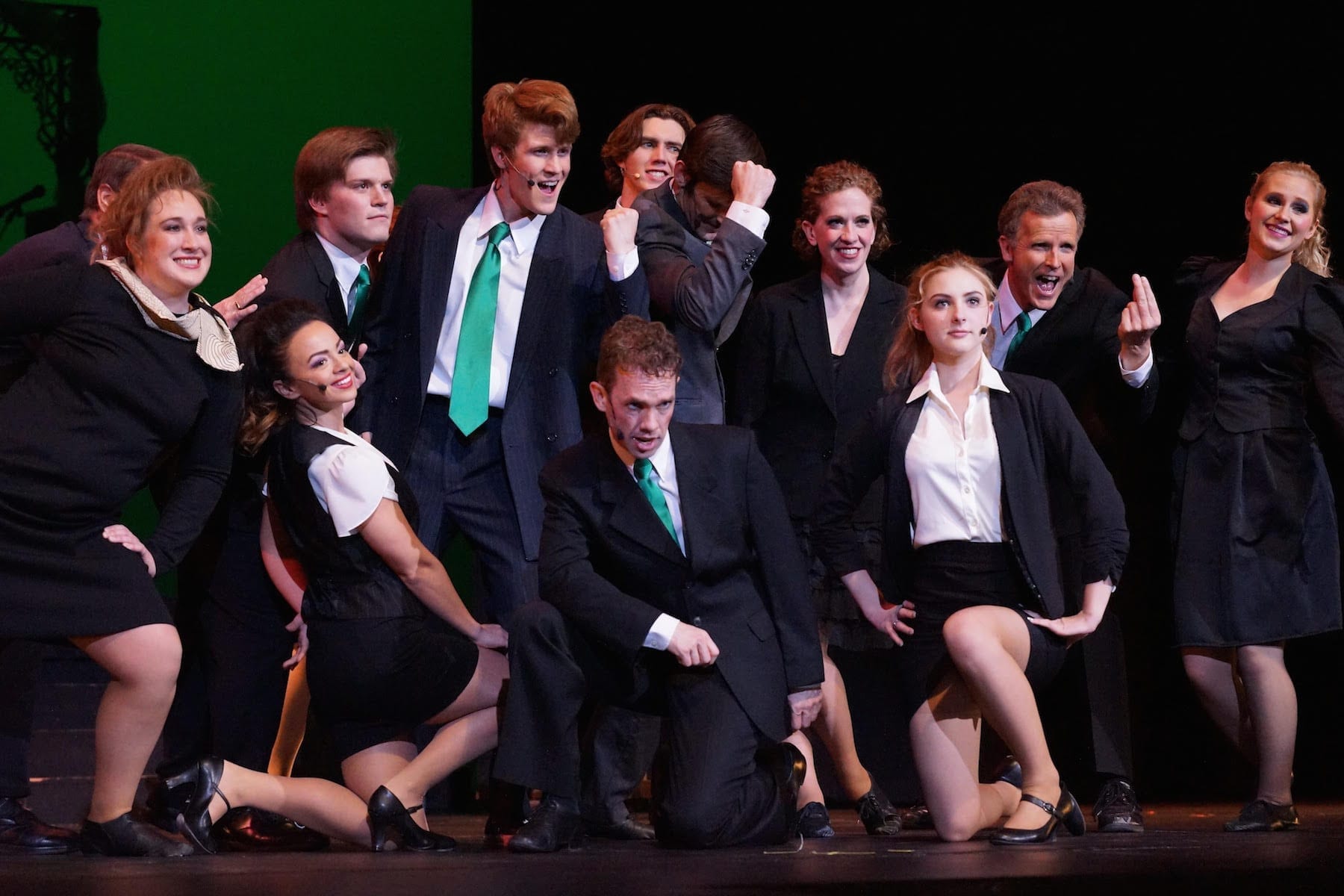 CEDAR CITY – Based on the classic 1990’s film by the same name, the musical version of The Wedding Singer tells the story of Robbie, lead singer in a wedding band who loses his faith in love after being left alone at the altar.  Robbie refuses to sing at the upcoming wedding of his coworker Julia, who is engaged to the successful and self absorbed Glen.  After they have spent some time together as friends, it becomes clear to everyone except Robbie and Julia that they are developing feelings for each other.  An upbeat soundtrack with music by Matthew Sklar and lyrics by Chad Beguelin cements the 1980’s setting and offers plenty of opportunities to highlight the offbeat characters that round out the cast including eccentric band members Sammy and George, and Julia’s best friend Holly.  Whether the cast is rocking out in the bar, crooning ballads in a dumpster, or getting down at a Bar Mitzvah, this show elicits a steady stream of energy and laughter culminating in a classic love story as Robbie and Julia each find what they are looking for in each other.

Produced by Cedar Valley Community Theatre and performed at the Heritage Center Theater, this production of The Wedding Singer brought 1985 New Jersey alive on stage in Cedar City.  A relatively young community theatre organization, Cedar Valley Community Theatre stages two productions annually with the purpose stated on their website of providing a “vibrant theatre culture.”  The Wedding Singer was certainly vibrant not only in its use of 80’s colors, costumes, and choreography, but also edgy due to its PG-13 movie content which was left nearly unaltered for this production.  Under the direction of Stephen Wagner, this cast managed to deliver the material in a comfortable way, never drawing attention to, nor purposefully shying away from the show’s language or themes.  The natural mannerisms and vocal inflections grounded some of the show’s more eccentric moments. One of the biggest successes of this production was the smart use of the stage and scenery.  Scenic designs by Ben Hohman included a trio of bathroom stalls which allowed for some fun choreography and also facilitated an on-stage costume change.  Later in the show, rolling shelves of plates turned to become the interior of a dress shop, creating just one of the many quick, easy, and smart scene changes.  Despite the great use of scenery on the stage, however, there were occasionally some disruptions in the blocking, specifically as Julia (Emilee Gull) delivered long lines of dialogue or full phrases of a song while turned upstage with her back to the audience.  This happened most notably in her character’s introductory number, “Someday.”

A skilled production team worked together to implement subtle details that enhanced individual scenes or songs or helped solidify the setting.  One of example of this was the choreography by Torri Adams.  From the opening number, “It’s Your Wedding Day,” I appreciated the clean, simple sequences that incorporated the era’s iconic moves while allowing for a polished synchronicity.  Another small detail that made a big difference was the water heater staged in Robbie’s bedroom.  This one simple detail spoke volumes about Robbie’s status in life, living in the basement of his grandmother.  Although some of the costume design by Robyn Harris lacked continuity, I loved the green ties used in “All About the Green.”  And Marty Shurtleff‘s smart sound design had me wondering if Robbie’s voice really did echo as he sang inside the dumpster or if it was just a sound trick. With music playing such an important part in the plot, I was grateful to get to hear an eleven-piece live orchestra playing so well that I briefly wondered if I was hearing prerecorded music.  Under the music direction of Carylee Zwang, the ensemble delivered notably strong harmonies in choral songs such as “Pop!”  Two of the most confident numbers came at surprising points in the plot, with the wedding band members Robbie (Reece Brown), Sammy (Trevor Walker), and George (Indy Jones) delivering their strongest number at a Bar Mitzvah, “Today You Are a Man,” and the ensemble pulling out all the stops for the final few bars of the curtain call.  I found myself wishing that the cast had been able to sing at this same committed level throughout the production.  Additionally concerning were the ragged cutoffs which peppered the score, the men’s number “Single” being one specific example of an ongoing problem.  I enjoyed the show’s soloists most when they had an opportunity to sing a ballad, and least when the score called for a hard Rock ‘n’ Roll style.

Consistent commitment to character can be integral to the success of a quirky show like The Wedding Singer, and this cast certainly delivered.  As George, Indy Jones was tasked with the necessity of being funny, and he was.  I was thoroughly entertained each time George got to sing the lead with the band, and I enjoyed the physical mannerisms Jones assigned to the character and incorporated into both blocking and choreography. Holly (Kelsea Burton) was the standout performer in this show, displaying impeccable comedic timing throughout the dialogue and strong vocals in songs like “Right in Front of Your Eyes.”  Her chemistry with Jones as Sammy offered a different view of what love sometimes looks like, and Jones matched Burton’s performance in both comedy and vocal ability.  His lead singing on “Single” was one of the best male vocal performances of the evening.  As Linda, Tamara Reber brought the 80’s rock vibe in her costumes and personality, but I found it very difficult to understand her dialogue or lyrics.  Unfortunately, her commitment to character had a somewhat negative impact on her part in the plot, leaving Robbie at the altar. As Julia and Robbie, Gull and Brown were given the difficult task of recreating the silver screen chemistry between original actors Drew Barrymore and Adam Sandler.  Even with excellent directing and acting, I think it can be very challenging to deliver what the audience thinks it wants in a way that is equal parts fresh and reminiscent.  Thankfully, Gull and Brown were able to do just that, bringing their own unique chemistry to the roles while still giving a nod to the original interpretation.  One of my favorite moments was when Robbie was singing to Julia from the inside of a dumpster.  Gull portrayed Julia in such an endearing way that I couldn’t help but become invested in the character’s future happiness.  Although there were times when I wished Brown would have owned the stage more dynamically, he fully committed to “Somebody Kill Me,” and he delivered his several ballads with a skillful tenderness.

Because I had the opportunity to see this production of The Wedding Singer during its closing weekend, I unfortunately can’t really suggest you get in on the fun (as I most certainly would have).  Instead I will simply suggest that if you have an opportunity to be in Cedar City during a Cedar Valley Community Theatre production, you will likely find their production to be in line with the values they have established for themselves as a company: to be “committed to an imaginative production style, cultivating diverse artistic talents, telling meaningful stories through theater, and having a positive influence on audiences.” 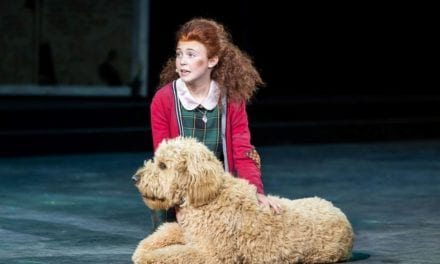 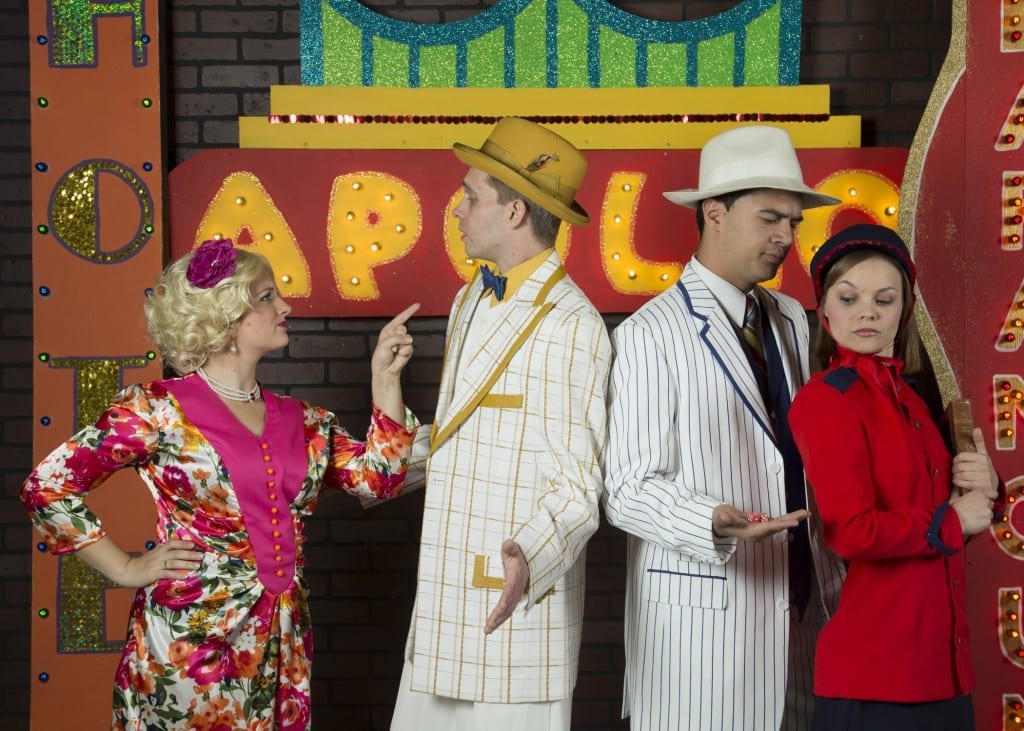