SALT LAKE — I know that the evening news is biased and embellished. I know that reality television is staged. And I know that the majority of theatre that I see is fictional. Despite all this, I still get a little excited when these imaginary storylines show me a brighter version of life and humanity. Somehow things seem more possible if I have seen them work out, even in fantasy. I felt that hope as I watched Elaine Jarvik’s Two Stories, at Salt Lake Acting Company. I smiled at the revolutionary image of a neighborly disagreement being discussed face to face. Soon enough, though, fiction lined up with reality; out came the artificial smiles, empty promises, and selfish acts. I was disheartened as Jarvik’s characters turned their backs on honesty and openness because I had connected with these people, their story, and their happiness. But it all felt real, and Two Stories had a great knack for pulling me in. In this story, Jodi and Kevin are a married couple who have lived in their neighborhood for many years. They enjoy their space, their way of life, and even their view of the sky. When a new couple moves in next door, with their children and mother, cultural and personality differences lead to friction.

Alexandra Harbold played a positive and enthusiastic Jodi. Her lines started a little too enunciated and her blocking unnatural. But as the characters warmed up to each other, I warmed up to Harbold’s performance. She was convincing when she put on a friendly face for her neighbor, even while she was unhappy behind his back, so Jodi never felt malicious or conniving. Zack Phifer plays Kevin, Jodi’s fairly easygoing husband. It was a super lovable performance, but Phifer’s anger or retaliation were less believable. His irritation with the neighbors didn’t grow as organically as I would have liked, and his anger, including his few moments of profanity, felt forced. On the other side of the fence were the neighbors from Pakistan, played by Tamara Howell and Tito Livas. Coached by Sandy Shotwell, their thick accents seemed flawless to my admittedly ignorant ear. Howell tripped over a few lines, but I was still fond of and fascinated by her portrayal of Bashira. I watched her hands, her mouth, and her eyes, as she spoke and moved with such subtleties; she was a striking presence. As Bashira’s son Amir, Livas also demanded my attention. Whether by his effusive happiness, his furrowed brow of concern, or his rigid response to Jodi’s article, Livas could not be ignored–he was terrifically intense.

Keven Myhre, the director, could have smoothed out Phifer’s awkward jump to angry neighbor and Bashira’s abrupt change from standoffishness to acceptance of Jodi. The way Myhre paced the central conflict of Two Stories, though, was fantastic. It grew and diminished seamlessly, and the story was never implausible. Bashira and Jodi’s friendship, too, became very believable. Myhre designed the set as well, and he did a great job. The view onstage was of the backside of a small home. Fenced in on both sides, it had a wood patio, a patch of “grass,” and a clothesline. (Artificial flowers seemed a bit silly, though, because the script brings attention to them). I noticed the highlights of color throughout the show, like the blue door to the house. It’s an interesting stage design because the audience is permanently located in this backyard, a fairly personal area of a home, and it is easy to side with its residents. Therefore, Kevin and Jodi have the home-court advantage. And because the audience has a limited view of the location, they are free to imagine Amir’s house towering over them and threatening Kevin and Jodi’s status quo.

The sound quality was dependable as always at Salt Lake Acting Company, and the music that was chosen fit well into transitions. Jennifer Jackson was the music and sound designer. There were a few instructional videos that the characters “watched” and the audience heard; watching Jodi learn to wear a sari and Keven craft a giant pink donut was quite entertaining. K. L. Alberts and Jesse Portillo distinguished each character through their costumes. Keven and Jodi were casual and summer-y, while their neighbors were more formal. Bashira was covered head to toe. She wore black pants and shoes, but more colorful headscarves. Amir wore tailored business attire.

Contrasting characters and their gradual climb of conflict make Two Stories a play worth considering. Although things are a little rough to start, it is easy to identify with the themes in this show, and they are delivered in good form on the stage of the Salt Lake Acting Company. 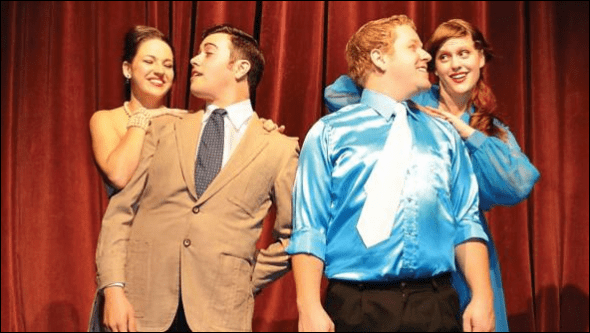 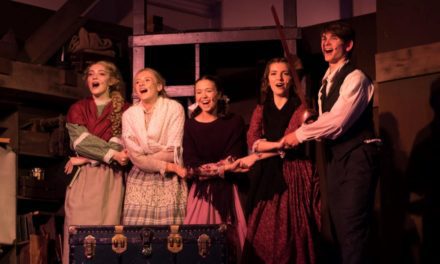