MURRAY — The last time I attended a show at the Desert Star, I was in high school. Therefore, my memory of the facility was sketchy at best. When we arrived, I was quite surprised at the lobby. I am not sure if it has changed in the many years since I have been there, or if I remembered a slightly different venue. No matter, I can say I truly enjoyed the lobby, ticket office, and all because of the friendly, homey feeling that every inch of the Desert Star facility conveys.

When we got into the theatre, the tables were quite close together and because my father and I are not the smallest people it was a little tight, which worried me. But once we were seated, we were comfortable and fine. We took in more of the mood of the Desert Star facility. I loved the stage, the stage coach on stage left, and the piano on stage right. The set-up is similar to an old style vaudeville theater, and the ambience is certainly compelling.

Pianist Brooks Teeples came out several minutes before the show, introduced herself, and began to play. Teeples was by far the best part of the show. As a pianist myself, I was truly impressed with her talent, as well as her humor. It was nice to see her not take a “backstage approach,” but to actually have fun with the show, as well as showcase her skills. I truly enjoyed her style of playing, and felt it added so much to the overall experience. With over a quarter century of productions at Desert Star, it is not surprising that the costumes, set, and lighting design were all fantastic. I enjoyed the portrayal of the old west, felt that the painting on the backdrops was especially eye catching, and felt the costumes accurately reflected both the time period and the individual characterizations. Kudos to Mary Parker Williams, Lynn Funk, John Duffy, Eric Jensen, and the entire production team.

So what of the show itself? Each of the players were extremely talented, with a particular shining star in Danny Eggers, the lovable bartender and romance story enthusiast Elmo Whittle. When he would talk about the thrill he got from reading the short romance stories in his favorite magazine, much of the audience would laugh at Eggers’s absurd delivery. One of my favorite things about his performance was that he would never drop character, even when dancing or ad-libbing. He also had great comedic timing, saving the show from little mishaps with his quick wit, such as when a sign broke. Both Calamity Jane, played by Krystal Kiene, and Ambrosia Hepsibah, played by Melissa Cecala, had strong moments with singing and acting, a favorite being when they first meet atop a stage coach. The way they incorporated the use of their bodies in physical humor was very impressive. The choreographer, Allison Anderson, also did an excellent job of using the talent of these players to develop fun numbers that were entertaining to watch.

However, for all of its positives, I am afraid the story of Calamity Jane, written by Peter Van Slyke, was slow and lacked some of the clever things I have seen in other parodies. I found myself getting sidetracked easily by other things happening in the audience, and feeling like there were not enough strong jokes to keep the audience completely engaged.

At the end of the story, the players put on an Olio, and this evenings fare was based on music from the movies. It was at this point that the performers truly shined. In fact, I heard one of the audience members sitting near me whisper to her seat mates that this portion of the show is why she attends the productions. After watching for about ten minutes, I would have to say that I agree with her assessment. The jokes of this portion, including an amusing portrayal of societies sudden love of Frozen, gave the biggest laughs of the night. Also, the fun choreography of the “music without words” portion, as well as the lighting, made this one of the very best numbers of the evening. When all the players would sing together, they had tight harmonies, and I found myself wishing they had more of the Olio when it was over.

Although Desert Star Playhouse has changed greatly since my last visit, it’s still a fun, family friendly place for live comedy. Thanks to Calamity Jane‘s performers and the Olio, I will ensure that much less time passes until my next visit. 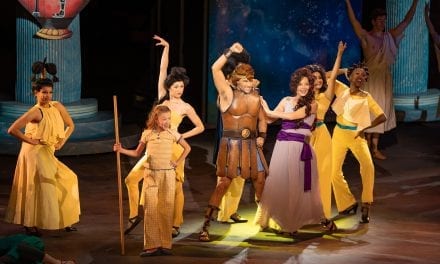