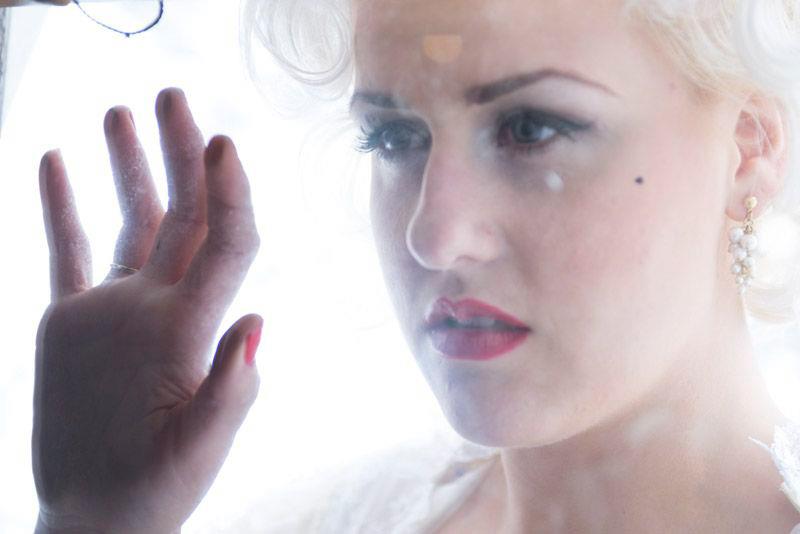 SALT LAKE CITY — The most important thing to know about the production of A Streetcar Named Desire from Skye’s the Limit Productions is that it is long. Really long. It’s so long that a person could ride a real New Orleans streetcar for 42 miles in the time it takes to see this production. At 4 hours and 40 minutes long (including a 15 minute intermission), it is the longest play I have ever reviewed or even attended. A Streetcar Named Desire is Tennessee Williams‘s Pulitzer Prize winning play about Blanche DuBois, an aging southern belle who comes to New Orleans to live with her younger sister, Stella. Because of a serious of financial catastrophes and decades of mismanagement, Blache has lost the family estate and old money. Stella’s husband, Stanley Kowalski, a blue collar slob who is the opposite in every way of the delicate Blanche. As time wears on, Stanley and Blanche grow to detest one another more, and it becomes clear that the two cannot live together under the same roof.

In her portrayal of Blanche, Skye Dahlstrom made it clear from the beginning that Blanche was refined and not thrilled to live in New Orleans. Dahlstrom also had an impeccable Southern accent, which never faltered during the entire performance. She ensured that whenever Blanche’s façade was in place that she had polished movements and perfect manners. However, Dahlstrom could also realistically show Blanche’s mental health and interpersonal problems in a heart wrenching way. Stanley was played by Jake Holt with a masculine swagger that contrasted well with with Dahlstrom’s sweet demeanor, and it was easy to see why the two characters were in such strong conflict. Holt also showed that Stanley was “common,” but I wish he had embraced the sheer brutishness of Stanley. Blanche calls the character “bestial” and “like an animal,” and it would have been nice to see why Blanche talked about Stanley in this way.

Elizabeth Fellows played Stella, who served as a bridge between Stanley and Blanche. I enjoyed how Fellows showed how torn Stella was between loyalty to her husband and her sister. Fellows especially added a touch of tenderness to the scenes where Stella was being physically abused by Stanley; more importantly, she showed why Stella would stay with an abuser for so long. I find this important for the 1947 play to make sense to a 21st century audience. Also, Lance Reeder was charming as Mitch, Stanley’s longtime friend who takes a shining for Blanche. Reeder gave Mitch a quiet awkwardness as he tries to get to know Blanche was sweet, and it was easy to see why Blanche would reciprocate his affection.

Even with the strong performances from the principal actors, I was still dissatisfied with the performances. This is because most of the cast seemed to be performing in isolation of each other, and I never felt like the strong relationships of this character-driven play were being fully developed. This was most apparent in the way many conversations occurred in the play: one actor would deliver a line and then three or four seconds later another actor would then deliver another line. This slow pacing dragged down every scene in the play and is probably why the performance was so long. I wish that the director, B. O. Smith, had helped the performers interact with one another more, which would have done so much to also reduce the running time of the play. I also wish that Smith had fostered the sexual desire between Stella and Stanley, which would have made the husband-wife relationship stronger and more interesting to watch. Finally, most of the dialogue-heavy scenes in A Streetcar Named Desire suffered from a lack of vitality; the poker games were joyless little affairs, and the interactions between the two sisters were often so meandering that it was difficult for me to stay focused on the dialogue. And the Mardis Gras scene was bizarre and looked completely silly.

The small space where A Streetcar Named Desire was performed—the second floor of a restaurant—lent itself to a lot of subtle acting, directing, and designing choices. The limitations of the production budget were apparent (but no more so than a typical arts council production), but I am still impressed by the quality of the props and the women’s costumes (the latter designed by Beth Olson), which lent a great deal of authenticity to the play. Beth Olson’s set design helped convey the impression of a grimy run-down New Orleans apartment, and imaginative theatre goers will have no trouble filling in the blanks and completing the illusion. However, the small space also had disadvantages. Many lines were mumbled, and I wonder if some of the cast members felt like they didn’t need to project as much because the seating was limited to about 35 audience members.

So, I feel mixed about this show. There are nice aspects of the production, but it also has obvious flaws. I think that the Utah theatre community has neglected the works of Tennessee Williams, so I’m elated to see Streetcar on the local stage. But the running time greatly tried my patience. Much of the proceeds from the ticket sales to the Battered Women’s Shelter in Salt Lake City (an appropriate charity for this play), but the quality of the show is inconsistent with Utahns’ expectations for a stage show of this price. There are reasons to see the play: the respectable performances, the gorgeous dialogue, and the chance to help women in need. However, some may prefer to spend the 4 hours and 40 minutes watching the film version—twice.

The Skye’s the Limit production of A Streetcar Named Desire plays at Diamond Lil’s (1528 West North Temple, Salt Lake City) Thursdays through Saturdays at 7:15 PM through May 31. Tickets are $25, not including dinner, with a portion of the proceeds being donated to the Battered Women’s Shelter. For more information, visit www.streetcarnameddesireutah.com.