SALT LAKE CITY — If you are looking for a Christmas show that is a little bit out of left field, a little out of the ordinary, and tailor-made for the littlest audience members, look no further than The Children’s Theatre’s rendition of the old classic operetta Toyland. Now performing at their new theater facility in South Salt Lake, Toyland is guaranteed to bring a smile to faces young and old during the holiday season this year.  Housed for many years in a makeshift rental property closer to downtown Salt Lake City on State Street, the Children’s Theatre Company is expanding into its new facility very nicely.  The recently renovated theater is well-lit and inviting, welcoming its patrons into a warm, elegantly decorated lobby.  The first impression upon entering into the performance space is a good one. Seating less than 200 people, although twice as big as their old theater, the new space is intimate and friendly, encouraging the audience to feel very much a part of the action.  This feeling of inclusion is heightened by the introduction to the show by one of the members of the cast, in this case, the character of Old Mother Hubbard (aka Widow Peep, played by Jennifer Hohl, who also served as director, music director and choreographer) who educates young and old alike in theatre etiquette and expectations with humor and laughter.  From the moment Hohl stepped onstage and addressed the audience (which included a threat to take off her pantyhose and leave for the night if the audience couldn’t offer more encouragement and appreciation), I knew we were in for a hilarious time.  My young companions (my daughters aged six and eight) were delighted from the start and they, like most of the rest of the children in the audience, were thrilled to know this was a special place just for them.

The Children’s Theatre has found a comfortable niche in the local theatre community, specializing in producing stories aimed at both young audiences, as well as young performers.  This production of Toyland utilized both to great effect.  Most of the scripts are written by Joanne M. Parker, or adapted from popular children’s stories, and this script was no exception.  The story is simple and straight-forward: Widow Peep is the Old Woman Who Lived in a Shoe, her beautiful eldest daughter Bo Peep (Katy Nielsen, complete with four adorable sheep played by Helene Parker, Maryanne Cope, Kalea Atkinson and Alice Holmgren) is the object of affection of the miserly and evil Master Silas Barnaby (Michael Hohl), who concocts a plan to force Bo Peep to marry him against her will in order to save her mother and many, many younger siblings from being evicted from their humble shoe. Barnaby’s servant Rumple (Spencer Hohl) provides the witty asides and most of the physical humor. Spencer Hohl is quite athletic in his tumbling and flipping and scrambling about, and has a great rubbery face that is well-suited to the sneers and scowls required of this role. Other standouts in the cast were Tom Hohl and Tyler Boegler as Tweedle Dum and Tweedle Dee, respectively.  Though not twins, they worked very well together to create two characters who often acted as one, finishing each other’s sentences and playing off of each other’s lines and asides. They were a strong through-line in the story and it was easy to root for them while laughing as they bumbled about.

Nearly every other character ever found in Mother Goose’s nursery canon (including Mother Goose herself, played by Ashlee de Baritault) was present.  The children included Jack and Jill (Teddy Johnson and Kjerstin Cope), Red Riding Hood (Hailey Christiansen), Mary Quite Contrary (Lucy Holmgren), Little Jack Horner (Robert Cope), Wee Willie Winkie (Henry Holmgren), Miss Muffet (Cate Christiansen), and many others.  The grown-up characters included the Three Men in a Tub (Cameron Colony, Charlie Junkins, Robert Walker), the Sandman (Landon Kraczek), Ole King Cole (Neal Barth) and a Candy Lady (Sarah Martin), among others.  There was even a token appearance from Santa Claus (Owen Richardson) which delighted the children, and provided almost the only overt reference to Christmas in the show. Another cherished appearance was made by the Toymaker (Oran de Baritault), who was frantically trying to fill Santa’s order for toy soldiers before Christmas Eve.  Without giving a complete blow-by-blow of the plot, suffice it to say that all these characters and their nursery rhymes were cleverly woven into the script of Toyland.  But the main plotline concerns Bo Peep, her true love Tom Tom the Piper’s Son (Tom Nelson), her unwanted admirer Barnaby, his minion Rumple, and their dastardly scheme to force Bo Peep to marry Barnaby.  There was an epic battle between the toy soldiers and the Boogeymen, and, of course, the good guy wins.  The humor is broad, the acting broader and the physicality of the actors is tremendously enjoyable. It’s a little bit fairy tale, a little bit melodrama, and a lot of fun.

If there was one drawback to this production, I would have to say that the actors are not yet accustomed to playing on a thrust stage.  While the bulk of the audience was seated directly in front of the playing area, there were about three rows of roughly eight seats each on both sides of the thrust, and those poor patrons got a pretty poor sight of the action.  Their view consisted mostly of the actors’ profiles and backsides.  Working on a thrust stage takes practice and constant reminders to cheat out.  The choreography and most of the blocking could have easily been adjusted to include the side audiences as well.  Hopefully with time and as they settle into their new performing space, the actors will incorporate a greater awareness of the poor side audience. 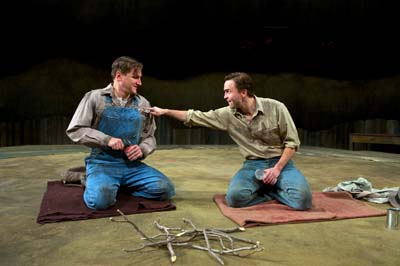 Pioneer’s OF MICE AND MEN is simply powerful 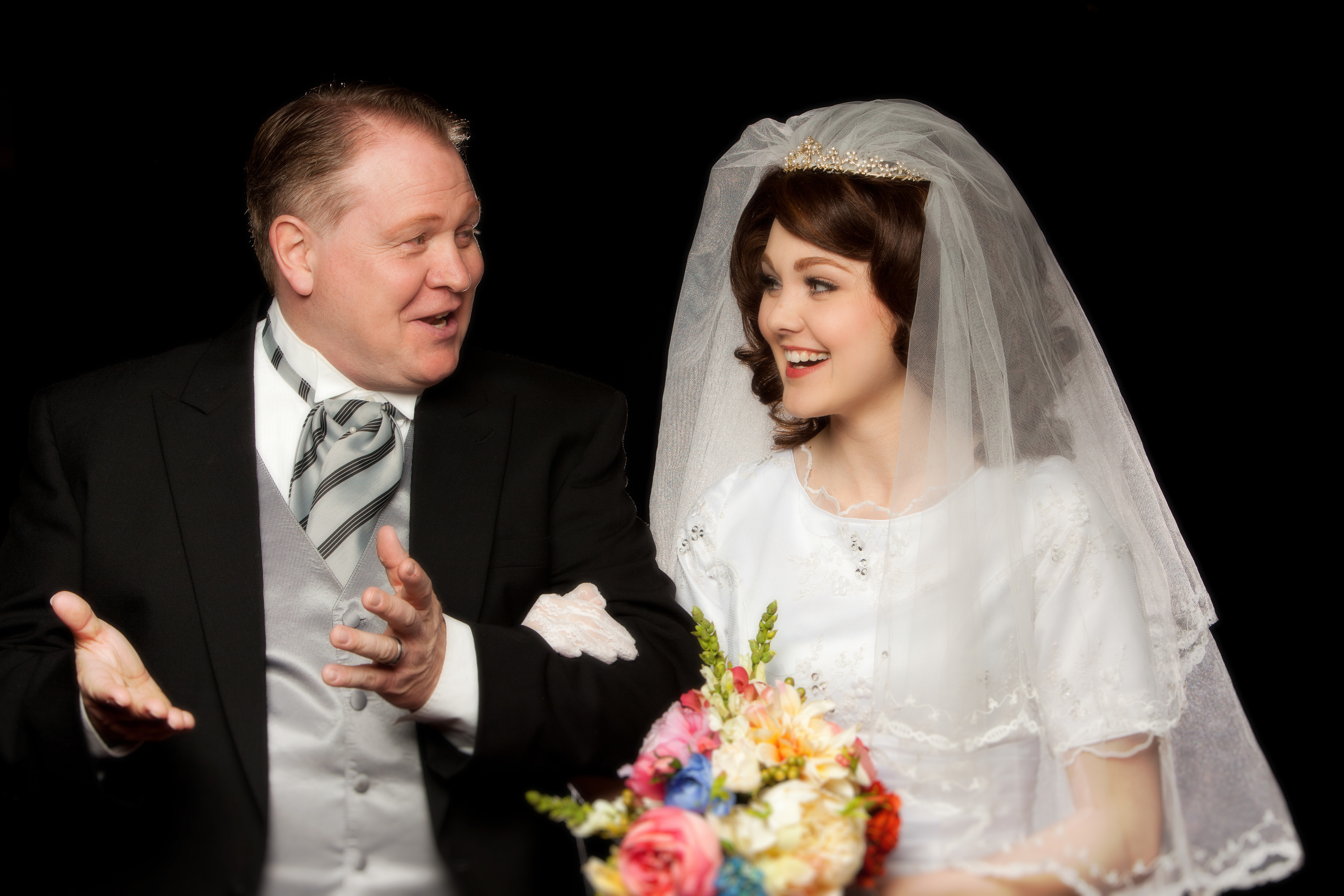 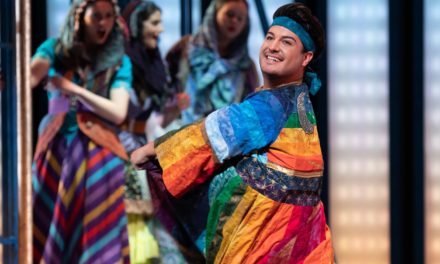