CENTERVILLE — Arthurian legends have entranced people for hundreds of years, and the stories have been retold and adapted into countless versions and styles. Perhaps one of the most prominent adaptations is the golden-age musical Camelot, with a book and lyrics by Alan Jay Lerner and music by Frederick Loewe. A show that is hardly produced anymore, CenterPoint Legacy Theatre in Centerville has successfully produced a magical and classic version of the favorite musical.

Many elements of this production were appealing and delightful to the senses. The music, set design, costume design, etc. Directed by Kristi Curtis, the cast exemplified a desire to produce a good show and performance of an old gem.

Upon sitting down, I was greeted by a beautiful vista of castle walls and large trees in the forest. The set design by Scott Van Dyke and Cynthia Klumpp caught my eye long before the show even started. And surprise still, as the large, two story trees rotated and spun 180 degrees to reveal the other sides decorated and designed to be the elegant pillars of Camelot castle. These “pillars” served as the main focal point of the show’s set. Throughout the show, Curtis showed her ability to use the set effectively to show many different locations with only a few large set pieces. 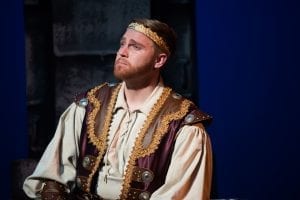 Complimenting this elegant and massive set were the beautiful costumes, designed by Tammis Boam. Though they were ideally what I would expect for a show about medieval knights, kings, and wizards, they were beautiful and elegant to look at. My favorite example and costume was the nymph-like, almost Shakespearean look given to Merlyn, played by William Hunt. His crown made of twigs and berries complemented his earthy robe and cloak. He resembled a character from A Midsummer’s Night Dream, and it was a different take on the way Merlyn typically appears. 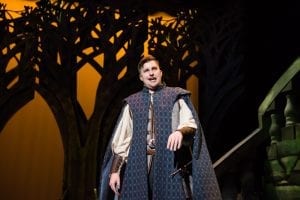 Camelot requires strong actors and singers for its three main principals of Arthur, Guinevere, and Lancelot, so I was pleased that the production team chose three stellar individuals. Leading the charge was Bryant Larsen as King Arthur. His tenacity and energy as the young monarch was palpable throughout the entire performance. Playing the part of Guinevere was Amber Michelle Jones. From the moment she entered, she portrayed Guinevere perfectly. Possessing the air of a young lady looking for a side dish of adventure and rebellion, she effectively sold her first song “The Simple Joys of Maidenhood.” Jones was very believable in her initial disdain for Lancelot and then her switch from the boisterous young queen, to a woman found in a predicament she loves and hates at the same time. When she confesses her love for Lancelot to herself, Jones believably made the switch in her performance. Last of the trio, but certainly not least, was Austin John Smith as Lancelot du Loc. Smith consitently portrayed the narcissistic knight with perfect comedic timing and a beautiful voice to accompany him. “C’est Moi” was a hilarious number to witness as Lancelot inform the audience what to think of him. Even a small break through the fourth wall at the end of the number was perfect for the character and wasn’t overbearing. Likewise, Smith gloriously sung the Act II opener, “If Ever I Would Leave You.” His strong vibrato and sustain echoed through the hall, and he was a delight to watch and listen to. Accompanying the principals was a strong chorus and ensemble who were obviously enjoying telling this story, as shown through their energetic performances. 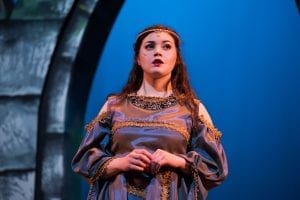 However, the production wasn’t without it flaws; some of which couldn’t honestly be placed on the production team and cast. To elaborate: Camelot is a show from the 1960’s when many musicals and plays ran about three hours long. By today’s standards, that is a long musical. With that, director Curtis had to make choices of which parts of the show to keep and which to remove in order to keep the show in a two-and-a-half hour time frame. As a result, some scenes took suffered because of the cuts. For example, when Lancelot and Guinevere declare their forbidden love for each other, it happened so fast that there wasn’t enough time for me to process and feel many emotions. Undoubtedly, the performances were strong. But because of the pace of the performance, the actors had to rush through the scenes without stopping. 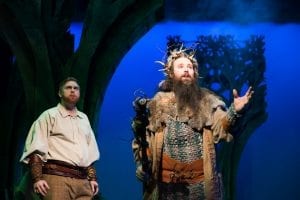 Another thing to note is the style of the script and book. Again, golden-age musicals tended to be more light-hearted. The topic of a love affair was more taboo in the 1960’s then today. With that in mind, the script only supplied a few limited scenes that discuss the affair and turmoil. Unfortunately, those brief scenes showed the acting chops of the three principals best. Between these brief important scenes are odd and often tedious scenes to keep the show going. One example is when Mordred (played by Ryan Zaugg) enlists the help of Morgan Le Fay (played by Janice Munk). While the context of capturing Arthur in a spell is certainly important, it is unnecessary to watch Mordred endlessly use chocolates and candies to tempt Morgan Le Fay into helping him. The script can not decide whether to be a serious domestic drama or a cheerful comedy.

All in all, the production CenterPoint has produced for Camelot is magical and delightful. Effective acting, set, lighting, and sound effects brought the medieval world to Camelot to vibrant life. Despite an outdated book and script, the cast effectively and happily performed the story and did a marvelous job. For a magical evening of knights and wizards, head over to Camelot.

Camelot plays nightly (except Sundays) at 7:30 PM and Saturdays at 2:30 PM through May 12 on the Barlow Main Stage at CenterPoint Legacy Theater (525 North 400 West, Centerville). Tickets are $19.50-27. For more information, visit www.centerpointtheatre.org.