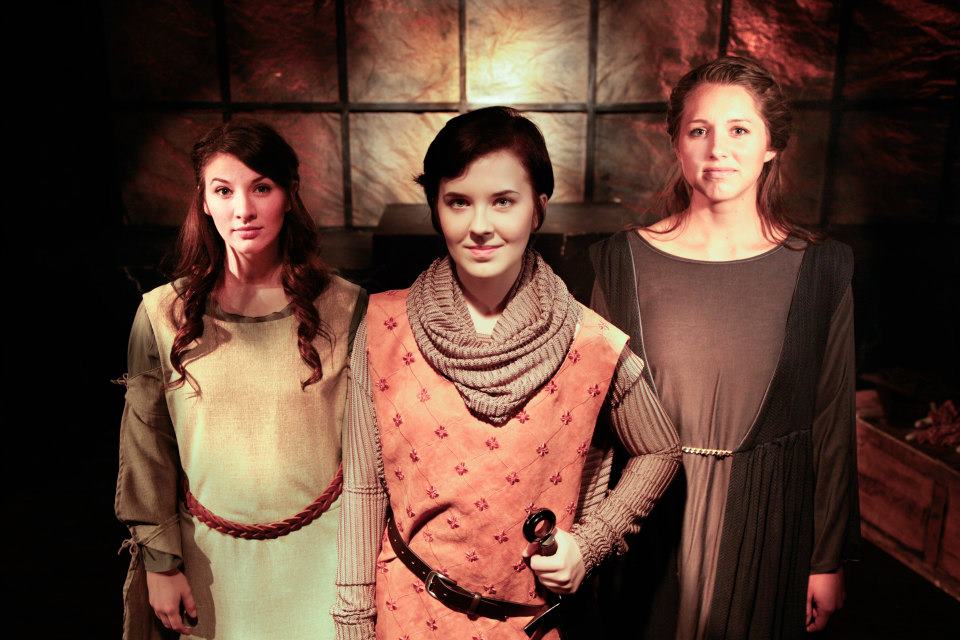 PROVO — If you have ever had the good fortune to take a dramatic theory and criticism course, you’ll know that there are dozens of discourses throughout history on the function of theatre.  While I certainly admit that I can heartily enjoy a good mindless comedy, I more fully appreciate a play that makes me think.  Melissa Leilani Larson’s Martyrs’ Crossing does just that.  I would even go so far as to say that it fulfills another function of theatre: it serves as a reminder of our potential as human beings to be something great: the very image of God that we were created in.  I realize this is high praise for a piece of theatre, and I should note upfront that Martyrs’ Crossing, under the direction of Brighton Nicole Sloan, has some serious flaws. But it is in a category of religious drama, especially that found among Mormon playwrights and production companies in Utah, that is so sincere in its spirituality that it can’t help but have success in its purpose despite the obstacles.  Assisting in this success is the dramatic and spiritual zeal of current and former BYU students that largely make up the cast and crew of this youthful production at the Echo Theatre. The play opens in a great library, which the audience later learns is the liminal space between heaven and earth (not purgatory, exactly, although that would hold tremendous possibilities if one were to dive into archive theory a là Foucault and Derrida).  In this library is every book or note ever written, every record of every human being throughout time.  To this library comes St. Catherine of Alexandria (Anna Hargadon), recently martyred.  Catherine learns that before she is to join Christ in heaven, she and St. Margaret of Antioch (Ronnie Andersen Stringfellow) are to assist a young French peasant girl named Joan (Mari Toronto) in her quest to restore King Charles (Stephen Geis) to the throne.  Given little direction by Michael the Archangel (Doug Johnsen), the two martyrs set about fulfilling their mission to assist the young Joan of Arc while forming a deep friendship with her and confronting their own trials of faith.  They follow Joan throughout her conflicts on the battlefield, to her imprisonment, and they are with her at her death. The story of Joan of Arc is larger-than-life and intertwining it with the story of St. Catherine of Alexandria makes it absolutely epic.  Larson’s exploration into the intricacies of sainthood is provoking and insightful, prompting one to contemplate the different possibilities of heavenly and human workings through time and eternity.  I must admit that the play forced me to reorient myself to an alternate interpretation of sainthood than that which is engrained in the devout Catholicism I embrace.  I think Catholics and non-Catholics alike are inclined to think of saints as strongly tied to Catholic history and tradition, and Larson make significant departures from that tradition.  In contrast, Larson pays considerable attention to the historical detail of Joan of Arc’s life.  This is both admirable and problematic.  The history of St. Joan is fascinating and necessary to Larson’s story, which is at its best when it focuses on the relationships between Saints united by common purpose but separated by time and death.  Unfortunately, however, the historical exposition is sometimes distracting, and it inhibits the progression of the intriguing intertwinings between these saints.

Larson’s skilled concentration on female relationships in this play cannot be overstated.  She has created strong roles for women that can stand on their own accord with little assistance from the male representatives from history. (In fact, it would not be hard to imagine this play without the male characters.)  She has given them beautiful words to speak and faith and strength that is enviable and admirable.  She takes Shaw’s St. Joan (to whom she pays clear homage in the play) and simultaneously makes her more human and more heavenly with intercessors that are equally so.  I must admit, however, that despite creating such satisfying female characters, Larson’s play still left me unsatisfied.  The unrelenting faith of these women in their Savior Jesus Christ never leads to their full eternal communion with Him in heaven, at least not in the play, which ends as it began, in the library (in fact, Jesus Christ is never heard or seen).  So, although St. Catherine notes that we must know sorrow to know joy, we never see that joy come to full fruition.  Admittedly, the audience is shown the joy that results from the women’s friendship, but never the full joy for which all Christians strive, especially those that have suffered horrific ends in the process.  Perhaps this is to remind us that such joy is difficult to achieve and takes the tenacity of the saints of old to do so.  It makes me want Larson to continue this thought further, right to the saints of these latter days.

If a mark of a good play is one that makes me wanting more, then this play should be called good.  It could also be made better.  A different director could more fully explore the play’s strengths.  This is not to say that Sloan’s direction is unskilled.  It is carefully choreographed and well-thought.  There is, however, a sense of too much haste.  Perhaps it is because she is in a hurry to get through the history of the play that she doesn’t allow time for wonder.  For example, the mystical elements of sainthood and heaven are not adequately set apart.  In addition, the scene in which Joan meets Margaret and Catherine seems particularly rushed without enough pause for the characters or the audience to fully explore the magnitude of such a meeting.  In addition, the stakes for the characters are impossibly and persistently heightened, leaving very little room in emotion for the actresses when the climaxes of the play do occur. Despite their continually heightened emotions, Hargadon, Stringfellow, and Toronto play their roles with passion and depth.  Stringfellow’s Margaret is a bit more refrained, giving some contrast to the overly-dramatic expressiveness of Hargadon’s Catherine.  The humanity of these two Saints is never fully realized to the extent that it is with Joan.  Toronto skillfully takes the audience from Joan’s peasantry to her (almost-achieved) glory, guiding the audience through trials of battle and faith to her ultimate death at the stake (nicely performed and staged).   She is surrounded by a supportive company of men who also give an impressive unified performance with Steph Geis’s multifaceted Charles a stand-out.

The other production elements are satisfactory.   The arched bookshelves designed by Matthew Boulter are seamlessly appropriate when they could be distracting.  The costume design by Lara Been is also suitable and pleasing in relation to the men who change characters quickly and often.  It is clear that for all those involved in the production, Martyrs’ Crossing is a labor of love, and it makes me thankful for the existence of independent theatres such as the Echo in Utah that are devoted to encouraging the development of homegrown drama in our state.  It makes me even prouder to support it. 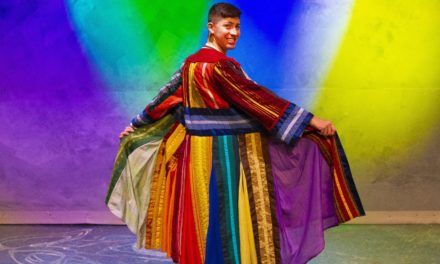 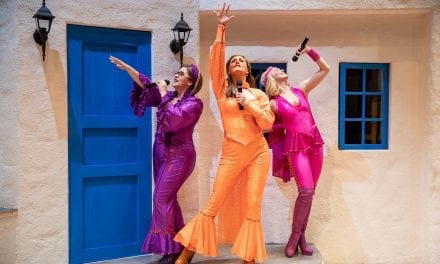