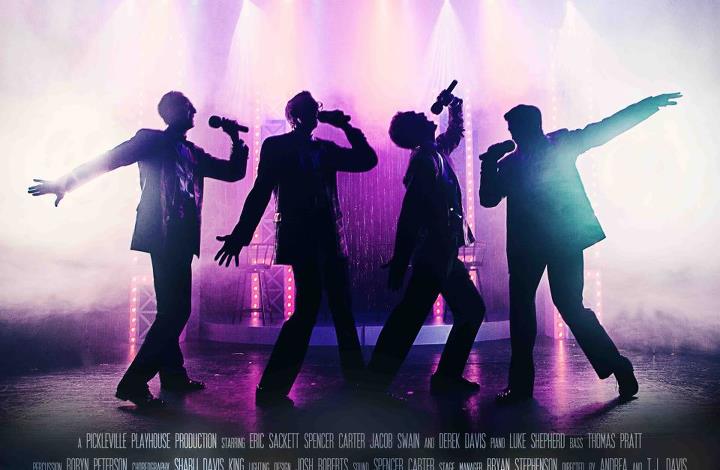 GARDEN CITY — Forever Plaid written by Stuart Ross with musical arrangements by James Raitt is a frequently produced show in Utah over the last several years.  And it’s easy to see why.  It is a small cast show with great music, a fun premise and witty dialogue, has a small combo for accompaniment, and is a real crowd-pleaser.  It tells the story of a fictional guy group from the 1950’s that was killed while on their way to a concert.  They are given the chance to come back to earth to give the show that never was.  As produced at  The Pickleville Playhouse, it lives up to it’s subtitle: it is a “heavenly musical hit.” Pickleville Playhouse is located near the shore of Bear Lake in Garden City, and is worth the drive through Logan Canyon alone to get there. Pickleville has been in operation since 1977 and has a devoted following of fans that return summer after summer. This was my first time attending a show there, but I doubt it will be my last.  We arrived at the theater in the midst of a torrential downpour.  A tour bus full of patrons had also just arrived.  The theater staff were gracious and helpful, and made sure everyone was comfortably seated before the show began.  The theater itself is very homey and inviting, with great sight lines throughout.  From the first moments of the show, I was hooked.

The cast was fantastic.  Eric Sackett as Jinx, Spencer Carter as Frankie, Jacob Swain as Sparky, and Derek Davis as Smudge were excellent performers and had great rapport with each other.  Each of the characters in the show are given odd quirks that they each overcome through the course of the show.  Jinx stuttered and has nose bleeds, Frankie has asthma, Sparky is a ladies’ man, and Smudge is shy and suffers from indigestion.  These traits are all developed through the course if the evening, starting with the very first number, “Three Coins in the Fountain.”  The harmonies were tight and pitch perfect.  They transitioned from one classic to another and the pace of the show was lively and fun. Each actor got their own moment to shine.  It is hard to single out any particular moments in the show because of the strength of this very talented cast. The two best moments for me were “Cry” when Jinx started out timid and halting in his solo but finally broke through to a powerful finish, and a similar moment for Smudge in “Rags to Riches.”

Directors Andrea and TJ Davis have created a wonderful evening in this show. Under the Davis’s direction, Forever Plaid is not simply a string of hit songs.  Each character is distinct and the dialogue between the songs is not just filler, but really tells the story of these friends and gives them each the chance to develop and grow through the show.    Over the course of the evening, I really came to care for the characters.  There are times, especially as the Plaids realize that this moment back on earth is coming to a close, that this show could have devolved into camp or been overly sentimental.  But thankfully the Davises kept that from happening.

The onstage trio of musicians deserves a nod as well.  Luke Shepherd on piano, Thomas Pratt on bass, and Robyn Peterson on percussion played excellently through 17+ standards.  The choreography by Sharli Davis King was also a great addition and evolved as the Plaids evolved from slightly halting, self-conscious moves in the early numbers to perfect synchronous choreography for “Love is a Many-Splendored Thing.”

There were a few mishaps during the performance: microphones being bumped during choreography or knocked over completely at one point, and a bottle broke during “Chain Gang,” but these were very minor missteps in an otherwise exceptional show.  From start to finish the show was a joy to watch.  Garden City may be a little out of the way for many people, but it is well worth the drive to see such excellent work being done.  The Pickleville Playhouse is a hidden gem in Utah’s theater community.

Forever Plaid is playing at the Pickleville Playhouse on various dates in repertory with “The Hanging of El Bandito-Reimagined” through Sept. 8, 2012.  The Pickleville Playhouse is located at 2049 S. Bear Lake Blvd. Garden City, Utah.  Tickets are $13-$18 and may be obtained by calling 435-946-2918 or online at www.picklevilleplayhouse.com.  Group discounts and dinner+show deals are also available. 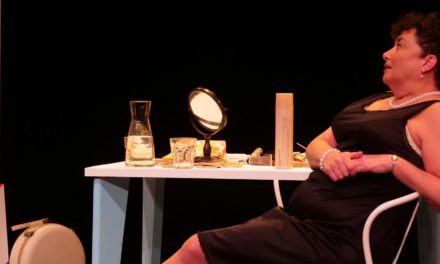