SALT LAKE CITY — There is something to be said for an excellent playwright. His words entertain, captivate, and get us to tune in to our emotions. Add to that a group of talented, skilled actors, and what you get is a lovely evening at the theater.

Neil Simon‘s play Chapter Two tells the story of two people: one is a man named George, who has recently lost his wife Barbara due to illness, and is grieving her death. The other is Jennie, a woman whose unhappy marriage to a man named Gus has ended after six years. Both people are trying to come to terms with starting from scratch, and, through their friends who are determined to see the two happy again, the pair meet and begin a whirlwind romance. What Neil Simon is most skilled at is mingling humor in with real-life drama. I felt myself sucked into the lives of George, Jennie, Faye, and Leo almost as if I knew them. The words were so real and some struck so close to home that I even found myself tearing up at one point.

In the role of George was Brian Pilling, whose portrayal of the grieving widower was graceful and emotional, and very well-handled. He slipped in and out of the lighter to more dramatic moments with the skill of an experienced actor, which was very refreshing to see. Playing his counterpart Jennie was JJ Peeler, who, like Pilling, filled the shoes of her character with maturity and strength. She was perhaps the strongest actor in the show, delivering up a veritable rainbow of emotions effortlessly. It is a truly magical thing to watch an actor slip into the skin of their character, so much so that you are convinced that Jennie Malone is real, and that these are her pains, her happiness, her habits and mannerisms. I was enchanted with Peeler, particularly in the second act, wherein she played a woman trying to understand what the man she loves is going through, while she, too, is suffering.

Another favorite of mine was David Hanson, who played George’s younger brother, Leo. Hanson started the play with his own kind of energy, and he played the sometimes jovial, sometimes solemn non-monogamist with a great deal of warmth and tenderness. I found myself wishing that Leo were my brother. It seemed to me that Neil Simon wrote this character, along with Jennie, from someone he knew, for that was the kind of love that went into the writing. Hanson played the part as a real person, especially in the second act, where the many layers of his character were revealed. Finally, Michelle Linn Hall played the role of Faye, Jennie’s best friend and Leo’s mistress. She floated across the stage merrily, a sharp contrast to the show’s heavier moments, and I enjoyed many of the aspects of her portrayal of Faye.

I took particular notice in the costumes for the show. In the first scene, George came in wearing a blue shirt, and Leo a purple one. Then, mirror-like, Jennie and Faye entered in the next scene, Jennie in blue and Faye in purple. There seemed to be a very specific idea about color in the costume designer’s mind, who unfortunately wasn’t listed on the program. (Perhaps it was the work of director Lane Richins.) Characters often wore darker or more mute colors in scenes where their moods were low, and more vibrant colors in scenes of jubilation or heightened emotion. Whether this was on purpose or not, I thought it a nice touch.

Whitney Betts, who designed the set, also seemed very specific in her intentions. The apartments were portrayed by a large flat serving as the backdrop, painted two different colors, almost like one apartment reflected in the mirror of the other. I also liked the way the apartments were decorated, which showed the audiences that both people were very alike, but also quite different. Both had pictures or paintings of Parisian hotels and restaurants on their walls, but George, unlike Jennie, had photos of his late spouse still lurking on walls and on his desk.

Richins did well in casting these fine actors, and I’m sure this made his job easier. All of the blocking of the show felt completely natural, never forced, and the actors all used body language extremely well. The cast never over-exaggerating their movements, but managing to portray tension, intimacy, and anger by their stances alone. Richins also made some fun choices for the actors, such as having Jennie and George slip into foreign accents in more flirtatious or lighthearted moments. You can feel a skilled director’s hand in a show that is very tight and balanced.

There were many moments in this show that touched me, and many that made me laugh. I would highly recommend it to anyone who would like to enjoy an evening getting to know these characters, and maybe even getting to know themselves a little better in the process.

The Wasatch Theatre Company production of Chapter Two plays Thursdays, Fridays, and Saturdays at 8 PM and Sundays at 2 PM in the studio theatre of the Rose Wagner Performing Arts Center (138 W. 300 S., Salt Lake City) through May 19. Tickets are $15. For more information, visit www.wasatchtheatre.org. 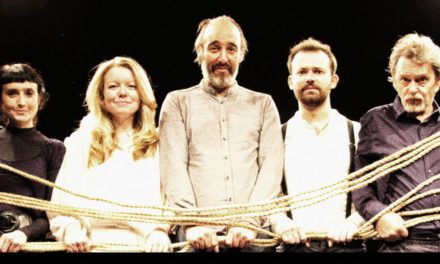