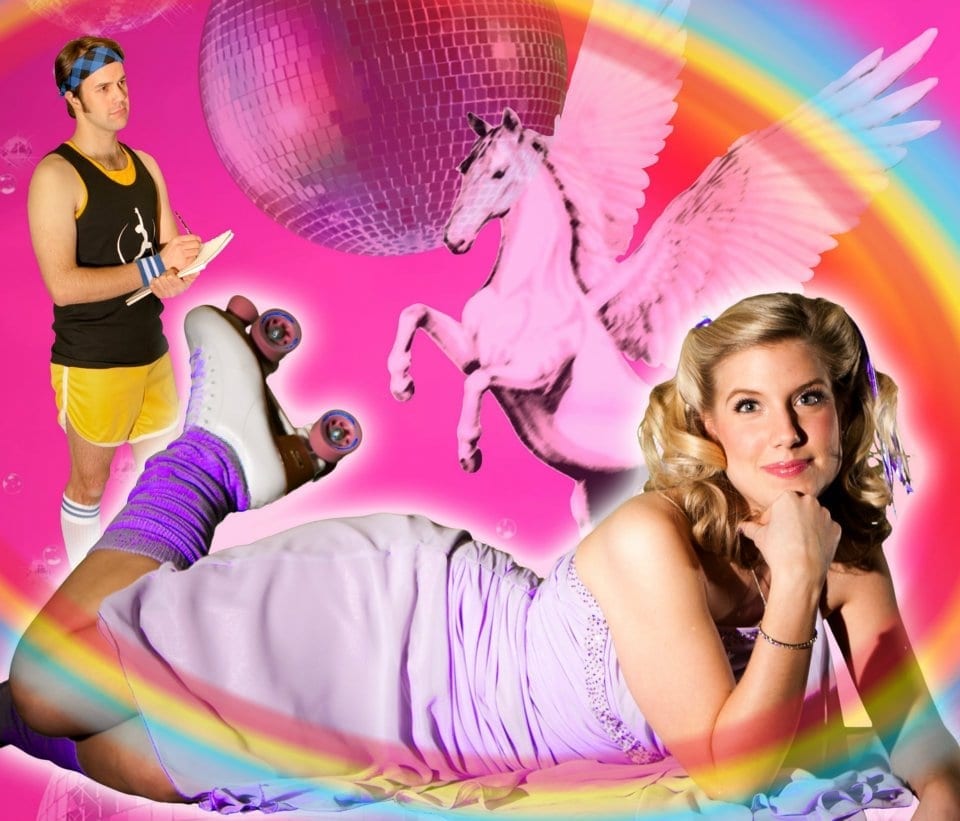 OREM — As most of UTBA’s readers are probably aware, many Broadway musicals today are based on successful Hollywood films. In a way, this makes a lot of sense. Broadway has always carried a great financial risk, and those risks have only increased in recent years. If a musical can draw upon the audience that a film garnered, then much of the work of the marketers for the show is already done. After all, before opening night, millions of people already knew the name and story for shows like Catch Me If You Can and Sister Act. That being said, Xanadu is an odd choice for adaptation into a stage production. The 1980 film is a disaster, with its gaudy costumes, messy plot, crummy special effects, and mind-numbingly stupid attempt at melding 1980’s rock with 1940’s jazz. So, I wasn’t really sure what to expect as I sat down to watch the Hale Center Theater’s production of the stage show.

Xanadu is the story of a young chalk artist named Sonny Malone (played by David Guy Holmes) who feels despondent because he cannot find success. Enter the muses, the ancient Greek immortal demigods that provide inspiration for the what-is-to-be Sonny’s magnum opus: a temple to all of the art forms—painting, music, dance, and roller skating. Yes, the muses inspire Sonny to build a roller disco. Chief among the muses is Clio (Kate Bailey), the muse of history. She disguises herself as a young Australian woman named to help Sonny fulfill his dream. In the process, Clio falls in love with Sonny, which is against the laws established by Zeus that govern the muses. Admittedly, it’s a silly premise, but many successful musicals have been built upon less.

As portrayed by Holmes, Sonny is a simple and loveable guy. His short shorts (if you’re a Utah native, they’ll remind you of John Stockton’s shorts), speech patterns, and knowledge of the music of the era makes Sonny the embodiment of the popular culture of 1980. Part of what makes Sonny so endearing is the fact that he’s not terribly intelligent, as demonstrated by Holmes’s frequent blank stares and confused looks. I especially loved Sonny’s cluelessness in the phone booth scene, which established a great deal about the nature of the character while doing something as mundane as making a phone call. All in all, I feel that David Guy Holmes’s portrayal of Sonny is totally rad.

Kate Bailey is an entrancing Clio. She is completely believable as a mysterious being who is the source of inspiration for Sonny. Bailey, however, doesn’t give the audience a simple, haughty immortal (like you would see in A Midsummer Night’s Dream). Rather, Bailey clearly gives Clio some vulnerability—especially in the scenes where she and Sonny plan and build the roller disco. This made Clio a far more complex and interesting character than I thought she could be at the beginning of the show.

The rest of the cast was quite competent in the execution of their roles. I thought that Ames Bell, though, was the most eye catching of the supporting cast in his many roles. From the opening number (“I’m Alive”) through the finale, Bell was enthusiastic and exact in the execution of Jennifer Hill-Barlow‘s choreography when he was playing the muse Terpsicore. Bell was spectacular in his tap dancing scene (as a younger version of Danny), and when he played Hermes he embraced the physical gag of the scene. Bell’s performances were so entertaining that my companion and I found it difficult not to watch him whenever he was on stage. The other outstanding performer in the cast was Ali Bennett, who played the muse Calliope and the goddess Aphrodite. Bennett gave a hilarious performance as Calliope, who sported thick glasses and a sideways 1980’s ponytail. Bennett’s Calliope was a sometimes spastic nerd, whose awkwardness made the character terribly fun to watch.

Visually, this show sparkles. No, really—Xanadu is full of sequins, glitter, and shiny cloth. Mittens, tools, robes, a helmet, and even a pegasus are bedazzling and appropriately gaudy. Costume designer Maryann Hill created pleasing costumes for the immortals, which contrasted extremely well with the more historically accurate clothes of Sonny and Danny (the other human character in the play). I especially loved Hill’s costume for Clio, which was simple, yet pleasing in the way that it permitted Bailey to move and dance throughout the show, yet also gorgeously show off Bailey’s figure. On the other hand, I detested the costumes for Zeus and Hera for the Mount Olympus scene. I thought that exposing the stilts that the actors were standing on ruined the ambiance that had been established by the lights and other costumes in the scene. I found it difficult to look at anything else during that entire scene.

I was also less pleased by the sound design for the play. Most of the music during the first half was too loud to hear any solo singing (especially during “I’m Alive” and “Evil Woman”), although the volume levels became more balanced as the night progressed. There was also quite a bit of crackling of microphones, which is unusual for the Orem Hale. There was no sound designer credited in the program (although Cody Swenson and Cody Hale are credited as technical directors), so I assume the sound problems happened because there was not a dedicated professional whose job was to prevent and solve these problems.

Although I thought that the acting was superb and the costumes exciting, the big reason why I think Hale’s Xanadu was so successful is because of Christopher Clark‘s direction and Hill-Barlow’s choreography. Clark clearly has a memory of and affection for the 1980’s; otherwise, this production would not be so endearing. Clark helped his cast embrace the cheesiness of the script and score and wisely discarded any notions of serious ideas that anyone would have about Xanadu. Thanks to Clark’s vision, the mood of the play was quickly established in the opening scene and maintained consistently throughout the evening. The choreography was energetic and quite fun to watch. I thought that Hill-Barlow’s best work was in “Dancin'” and “All Over the World,” both of which could alone be worth the price of admission. I’m sure Clark’s job was easier because of Beane’s script, which replaces all the seriousness of the movie with a tongue-in-cheek attitude that almost makes the stage Xanadu a parody of its source material.

Overall, Xanadu is a lot of mindless fun. Douglas Carter Beane‘s script is relentlessly funny and full of self-references. I loved the jokes about flashbacks, theater, and breaking out into song. The score, with music and lyrics by Jeff Lynne and John Farrar, is full of pop and rock songs, and the album could easily become a guilty pleasure in your soundtrack library. Xanadu isn’t Shakespeare; it’s not “high art.” But it’s well written, composed, directed, and acted. I’d recommend it to anyone in Northern Utah who is looking for a campy musical that can help you forget your worries for an hour and a half. 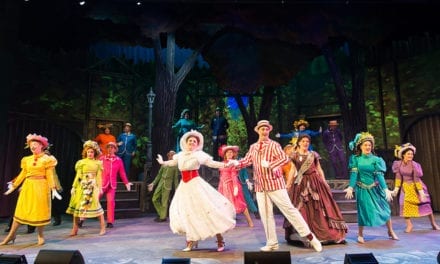 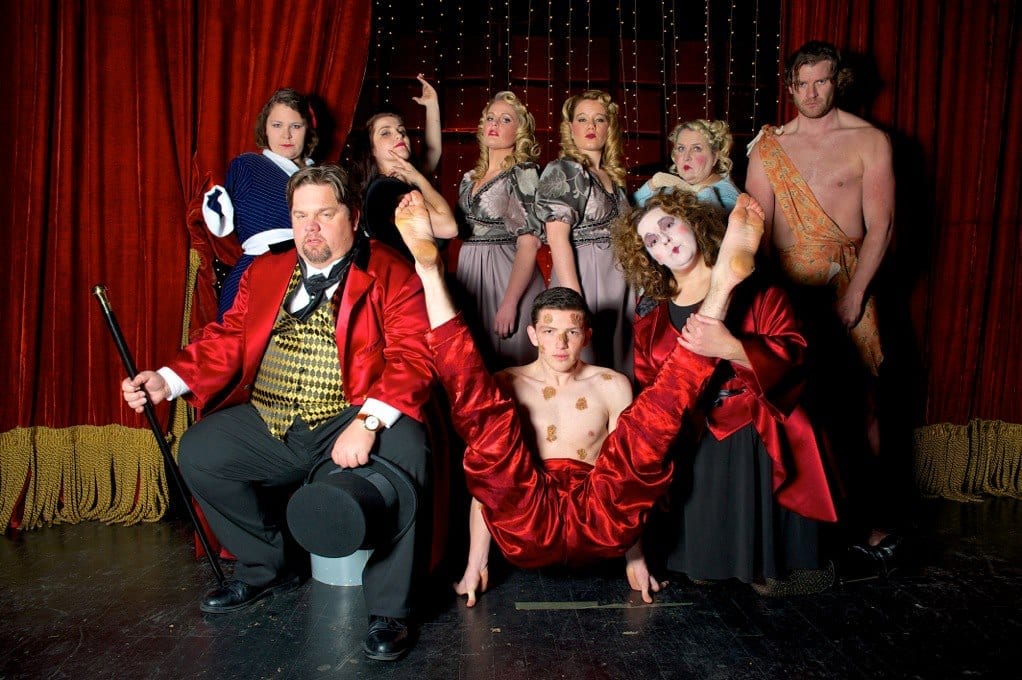 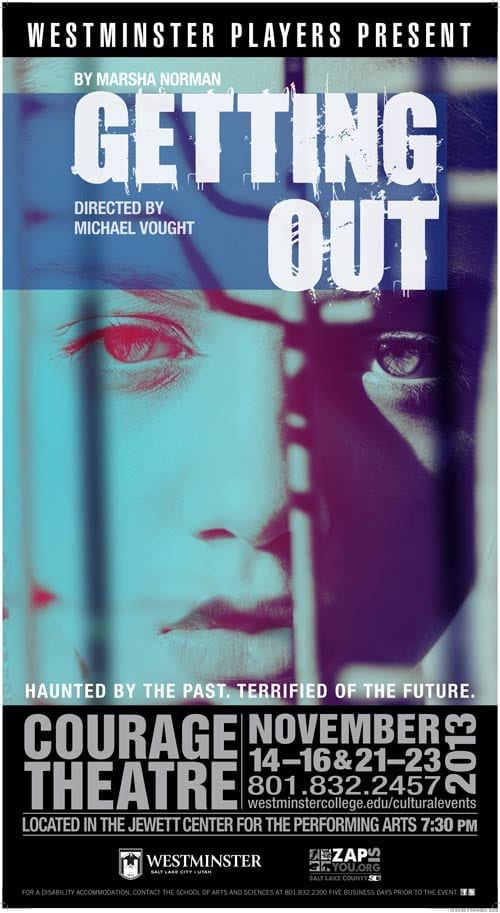