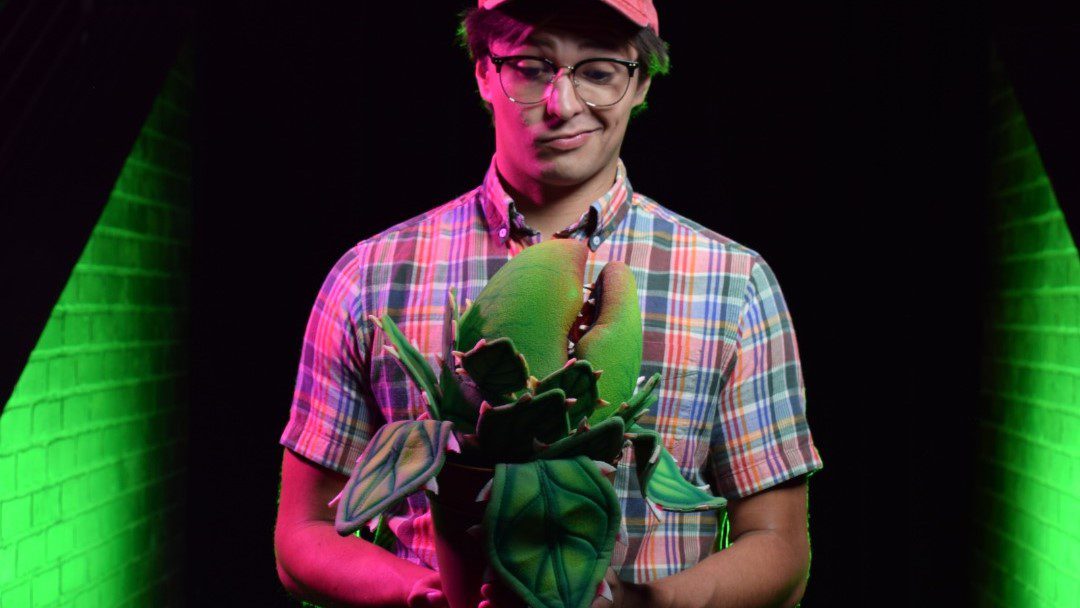 WEST VALLEY CITY — In a decade not so long ago on Skid Row, a mysterious plant is purchased during a solar eclipse by a kindly nerd named Seymour Krelborn. So begins the twisted tale of Little Shop of Horrors. This is a new American classic by Howard Ashman and Alan Menken, the creative team behind The Little Mermaid and Beauty and the Beast. After Seymour discovers a dangerous fact about his new plant, lovingly named Audrey II (named after his co-worker and dream girl, Audrey), Seymour must navigate a sudden rise to fame. Meanwhile, Audrey dreams of be better life for herself and makes the best of her relationship with her masochist dentist boyfriend, Orin.

If the plot seems a bit wild, well, it is. But it is a downright delight for anyone in the mood for a darkly funny — and surprisingly sweet — toe-tapping, campy musical. This was at least my third viewing of Little Shop on stage, and though I (for reasons unknown) was raised on the 1960’s black and white cult classic film by Roger Corman, I have never enjoyed the stage show, until tonight! I credit this to a talented cast, solid production values, and the vision of debut director Izzy Arrieta. Arrieta leans in to the over-the-top campiness of the show.

The West Valley Arts production Little Shop of Horrors is greater than the sum of its strong parts. Arrieta has developed delightful moments of comedy executed with precision by leads Ren Cottam as Seymour, and Tara Janae Smith as Audrey. The sincerity of their duet “Suddenly Seymour” had much of the audience grinning from ear to ear. The blocking and choreography, assisted by Stefanie Spiece, is well executed and perfectly suited to the audience in the round. Ryan Fallis adds to the visual spectacle with his flashy and luridly saturated lighting design. Morgan Golightly’s scenic design, with its low walls and smooth rolling modular pieces, works beautifully in West Valley Arts Center, the former home of the Hale Center Theatre. 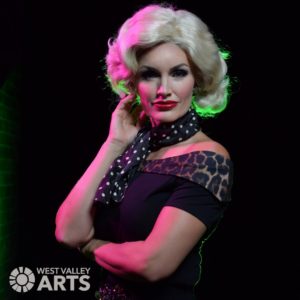 Alicia Kondrick‘s costumes are some of the best I have seen of late. The cast looks great, especially Nneka Barcelona as Crystal, Anna Kaitlyn Burningham as Chiffon, and Daysha Lassiter as Ronnette. These three function as a Greek chorus, interacting with the characters and narrating the action for the audience. I was also impressed by the wig and makeup designs by Savanna Finley.

Another definite highlight is Jared Lesa as the voice of Audrey II. The smooth voice seduces and cajoles Seymour and the audience, luring its targets from one depravity to the next. Byerly Neilsen is also doing great work keeping up with the voice as a fully embodied puppeteer. This pair did a great job improvising to keep the audience entertained during the technical difficulties. 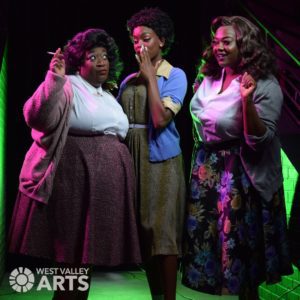 Douglas Irey as the dangerous dentist Orin Scrivello is appropriately over-the-top as he gyrates, Elvis-like around the stage. His big moment may have been over-shadowed by a wig malfunction, but he persevered admirably and the accident actually fit the character quite well. Mr. Mushnik, Seymour’s abusive and desperate adoptive father and boss, is handled with aplomb by ​Michael Hohl. The character is a challenge for any one, as he must walk a tightrope of likeability and being horrible, but Hohl manages this mix well.

There is wonderful attention to detail across all areas of the production. (A tiny note is for the prop team to remove the modern-looking plastic tags from the bottom of the plant pots that are dropped across the stage early in the show.) A microphone issue caused a significant interruption to the show on opening night, but I was having such a good time I did not really think much about having a few minutes to read the program and chat with my neighbors before the action restarted. No spoilers for the unsuspecting, but this production features a spectacular finale. 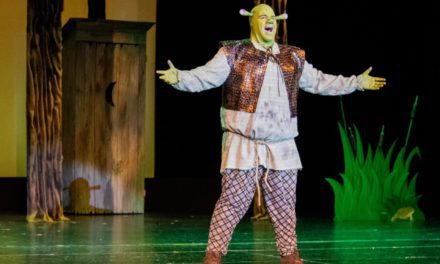