Covey’s MEDEA makes a valiant effort at a difficult piece

PROVO — The tiny Brinton black box theater at the Covey Center has melted. That is the impression that is given when one enters the small room. For those who have never been, let me try to give you an image: the room is absolutely tiny and only fits about fifty chairs around three sides of the stage, which takes up the majority of the room. That only makes for two rows of audience and stage area. That’s all.

Grasping the intimate nature of the room is important to understand. This is a theater where you will be almost on the playing area itself, which has been designed to look as if we are seeing the world through the melting, disfigured, hellish eyes of our title character, Medea. Needless to say, being that close to this particular character is not something that someone would wish upon themselves except in that odd self-destructive way that we do with horror stories and slasher flicks. This play is designed to unsettle and unnerve.

The story of Medea is a well-known one, but one that is often difficult for modern audiences. The play was written in ancient Greece by Euripides (updated in this production by Robinson Jeffers) and was based off of the myths of the day. As the play opens we learn quite a few things, but most notably, Medea’s husband Jason (of Argo fame) has left her for King Creon’s daughter. This is especially troubling for Medea because she is a foreigner and forsook her homeland for Jason, helped him obtain the golden fleece, and actually hacked her brother to pieces in the process. To make matters even worse, Creon arrives and informs Medea that she is exiled, which is a fate worse than death in this society. Medea gets angry, goes a little crazy, and decides to use her knowledge of witchcraft (red flag) to exact her revenge on all parties involved.

This is where the story gets sticky for modern audiences. A person committing so many heinous acts, would have to have an especially powerful reason in order to be justified. And so the audience puts Medea on trial in a way; was she right in what she did? Here’s where the director and the actors step in. If played in a certain way, it can seem as though Medea was acting out of sympathy for her children, sparing them the cruel fate of exile. Or if played another way, she can seem like a psychopath who becomes fixated on watching Jason suffer. The director of this production, J. Scott Bronson, has gone with the latter.

The design of the set, the stage pictures, and the choices by the actor playing Medea (Raquel Williams) are all designed to show the audience this tragedy quite literally through the eyes of Medea. This is so that we may better grasp the hell that she is experiencing. Through these eyes, we find no love, and no remorse; what she is doing is justified . . . at least, to her it is. The decisions to kill are cold and calculated. The glory she takes in the reports of her atrocities is chilling. There is a beautiful scene where the nurse (Melanie Gardner) is recounting in graphic detail the gruesome deaths of Creon and his daughter. It is horrific and emotionally taxing for the nurse, and yet Medea just sits and takes it in with a cool composure that is only broken to push the nurse farther in her tale. It was a perfectly timed change from the anxious Medea that was played at the beginning of the piece, when she was first learning of her dire situation. The change made the audience feel that this was it; she had snapped and no one was safe.

I would say that my favorite performance of the evening was that of Eliot Wood, who played Jason. Medea, as well as most Greek theater, is all based on language. Nothing really happens onstage, people just come back and report about what happened offstage. Therefore language becomes so critical, and the ability to communicate what is happening to a modern audience while using an antiquated vernacular is one that is essential. Wood handled this extremely well. He brought a clarity to his lines that made it simple for the audience to follow along. He also had a commanding stage presence that took into account the authority of his character, his need for clarity, but also the small size of the theater. It would have been easy to be too powerful for the small audience, but also to be too small or relaxed to lose clarity of expression.

This, I feel, was a balance that was not always achieved by all of the actors. Don’t get me wrong, I know that it’s a difficult balance to achieve. Yet there were many times when lines would be lost because an actor was letting the signs of emotion (labored breathing, crying, etc.) get in the way of the words.

As for Medea, played by Raquel Williams, she was believable, though not immaculate. To give credit where it is due, I would rank this role in the top three difficult and taxing roles for women. Williams really did have some wonderful scenes, including the aforementioned scene with the nurse and her first scene with Jason, both of which I thought were spectacular. There was also this wonderful Toddlers in Tiaras moment where Medea was trying to convince the children that these deaths were wonderful and what everyone wanted, even though they were just lunacy of a mother on a power trip. However, at times, it felt as if there were nuances missing. Additional variations in emotional level, intonation, inflection, and gesture might have really helped to take the character further as well as helped in commanding the audience for the massive amount of time that she is on stage.

The supporting cast also had its moments of good and not so good. I truly appreciated that the three women in the chorus (Hayley Bell, Megan Holmes, Bree Evans) found ways to make their characters unique and individual. Melanie Gardner was wonderful as the nurse, and it was clear that she has experience on stage. Kocherhans did fairly well at distinguishing his four different characters, though sometimes one would leak into the other. It also would have been helpful to have a little bit more distinction in the costume and make-up designs for the characters.

So, the major question: is it worth seeing? Yes. I would say so, but with caveats. This was a middle of the road production. It really wasn’t spectacular in any area, but at the same time, there were many ways in which it could have been much worse. It was alright. It’s a classic story, and one that you should see at least once. This cast handles it pretty well. It is dark and gruesome, and like Mr. Bronson says in his director’s note “Besides, it’s Halloween. You were expecting The Sound of Music?” I think if you go with moderate expectations, and knowing that you’re in for a night of Greek tragedy, you really will enjoy yourself thoroughly. As much as you can with that much murder anyway.

Medea plays at the Brinton Black Box Theater in the Covey Center for the Arts (425 W. Center Street, Provo) Thursdays, Fridays, and Saturdays at 7:30 PM through 7:30 PM. Tickets are $12. For more information, visit coveycenter.org. 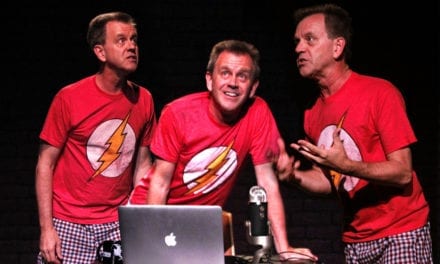