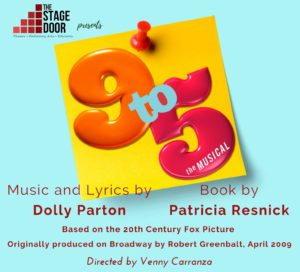 Based on the 1980 movie of the same name, 9 to 5 brings to life all the bigotry, misogyny and hypocrisy of a 1970s male-dominated corporate world, told through the writing of Patricia Resnick and the delightful music and lyrics of Dolly Parton. In fact, even on the stage in little ol’ St. George, Utah, Dolly Parton herself makes an appearance — via video technology — to narrate and introduce the characters in the production’s upbeat opening number, “9 to 5.” Parton’s signature southern charm instantly draws the audience into the story of three working women, Violet Newstead (played by Christine France), Doralee Rhodes (played by Morgan Pfunder) and Judy Bernley (played by McKenzie Morgan), who are each feeling the weight of the world on their shoulders and a strong distaste for their jobs at Consolidated Industries.

Although Parton’s cameo certainly adds to the opening scene, the production itself does not rely on the country music star to make it shine. Under the direction of Venny Carranza, with music direction by Alice Ericksen, and choreography by Emilee France, the entire cast of characters is endearing, staring with Violet. Featuring a spunky personality, dry pun-filled humor and sardonic looks, Christine France’s portrayal of Violet, as the character welcomes newcomer Judy to the team at Consolidated Industries, sets the tone for the rest of the show, and it does not disappoint. Set against a backdrop of woeful impropriety on the part of boss man Franklin Hart, (played perfectly in all his awkward and uncomfortable glory by Andy Young), the strong female leads are easy to root for as their stories unfold. 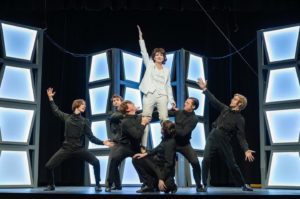 Pfunder seems to embody all the right Dolly vibes as she tells her tale of being a “Backwoods Barbie” just trying to be seen as something more than boobs and hair. Even her fellow female coworkers dismiss her as just another mistress for Hart, but Doralee shows she’s made of stronger stuff when she pulls out the heat she’s packing in her purse and threatens to change Hart “from a rooster to a hen with just one shot.” Meanwhile Judy’s sweet, somewhat subdued voice paints the picture of a woman who has been told one too many times that she’s not worth more than what the world and her ex-husband have been offering her.

Although Christine France, Pfunder, and Morgan clearly have individual vocal talent, their first combined number, “I Just Might,” struggled a bit to come together in pitch, feeling more like three individual solos, rather than a trio in harmony. However, the ladies more than made up for the earlier lack with a beautifully strong rendition of “Shine Like the Sun” later in the first act. But Morgan absolutely filled the auditorium with the empowering “Get Out and Stay Out” near the end of the show. 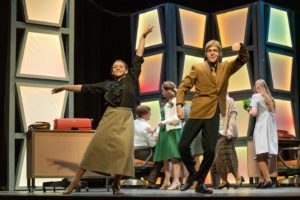 Although not part of the trio of heroines saving the world from Hart through rather . . . questionable methods . . . there is another leading lady who deserves her own set of praise. Barb Christensen in her role as Roz Keith. For reasons difficult to understand, given Hart’s intense dislike-able nature, Roz is the one woman in the office who seems to love Hart in spite of — or maybe because of — his power and conceit. Questionable choices in love aside, Christensen’s awkward-yet-delightful dancing in “Heart to Hart” proved she is a talent to be reckoned with. Plus, her awkwardness is the perfect pairing with some of Hart’s earlier antics, such as his air guitar impression that is cringe-worthy in the best way.

Similar to the corporate world, where the real work gets done by the “little guy,” The Stage Door’s production wouldn’t have been the same without the talented efforts of the ensemble cast. Each background character appeared to play multiple roles, which means many quick costume changes and so many wigs. The only thing inhibiting the ensemble was the working conditions, i.e. the size of the stage. When the entire cast performed together, it felt crowded, even with minimal set pieces getting in the way.

It is worth noting that 9 to 5 includes some language, sexual innuendo and adult topics that may not be suitable for young children. But for the working-age crowd, clocking in for work never seemed so appealing when you come join The Stage Door’s cast at 9 to 5 the Musical at The Electric Theater through March 4.

The Stage Door production of 9 to 5: The Musical plays Thursdays, Fridays, Saturdays, and Mondays at 7:30 PM and Saturdays at 2 PM through March 4 at The Electric Theater (68 East Tabernacle Street, St. George). Tickets are $17-21. For more information, visit www.thestagedoortheater.com.