PROVO — George Frideric Handel’s name has always been a familiar one in my life, but it wasn’t until I attended Tim Slover’s Joyful Noise at the Covey Center that I realized how little I actually know about the man who gave us the masterpiece, Messiah.

Written in 1741, Messiah premiered in Dublin because of intense opposition from both the people of London and the church, although Handel had been putting on operas and oratorios for over 40 years in London and had previously served as Kapellmeister to King George I.

Joyful Noise parallels Handel’s story of persecution with that of a young woman, Susanna Cibber, whose career and personal life had suffered greatly because of rumored affairs and immorality. Susanna turns out to be the only person who can inspire Handel to write and premiere Messiah.

Lon P. Keith, who played Handel, created a wonderfully sarcastic, lovable man. Keith found the balance between Handel being a worn old man and an eager, loving, creative one with plenty still to give to the world. His focus and commitment to bringing George Frideric Handel to life was a masterful success.

While the whole cast performed as a unified ensemble, other outstanding performances belong to the actors playing Bishop Egerton, King George II, and Susanna. Dave Hanson (Bishop Egerton) created a bishop who genuinely cared about the spiritual well-being of the town and really thought Handel’s music was a corrupting force. I enjoyed seeing his character learn and come to a beautiful realization of the power of music to testify of the Savior. King George II (Kevin Mackley) obviously loved being the king, but also beautifully portrayed a man lonely and tired after the death of his wife. Susanna’s (Jennifer Chandler) character needed time to grow on me. At the beginning it was difficult to relate or understand her choices, but by the end Chandler had brought to life a character who was a wonderful reflection of the power and joy that comes from repentance.

The play isn’t necessarily a “musical,” but does contain a few bars and arias from Messiah, that while necessary did seem a little out of place and awkward in their presentation. Regardless, the script tells a beautiful story of redemption for both Handel and Susanna.

From a director’s standpoint, I would have made different blocking choices and tightened up the musical moments. The play isn’t perfect, but what show is? It is the imperfections that make live theater so unique and powerful. There wasn’t a bad seat in the house to enjoy the cast’s sincere acting, and a nod goes to director J. Scott Bronson for the seamless and quick transitions from scene to scene.

Covey’s Joyful Noise isn’t a grand production. It takes place in the small Brinton Black Box Theater with a cast of only eight. Actually, the intimate setting perfectly reflected the message of the piece. It is a message of the humble and pure love of the Savior: reflected also in the simplicity of the set, in Susanna’s pure voice, and in the moving climax when Susanna stands to sing for the first time since her sins were made public. Before the king and bishop, she sings, “He was despised and rejected of men, a man of sorrows and acquainted with grief.” Silence came over the theater as those of us in front of and on the stage were touched by the immense sacrifice of the Atonement.

I highly recommend Joyful Noise to any and all. Go into the theater ready to embrace a simple, beautiful story and you will be moved and inspired.

The Covey Center for the Arts production of Joyful Noise plays on December 9-11, 13, and 16-18 at 7:30 PM and on December 18 at 2 PM at the Covey Center’s Brinton Black Box Theater (425 W. Center Street, Provo).  Tickets are $10.  Because of intense themes and the nature of the play, this show is recommended for children ages 12 and up.  No babies or babes in arms will be admitted.  For more information, visit www.coveycenter.org. 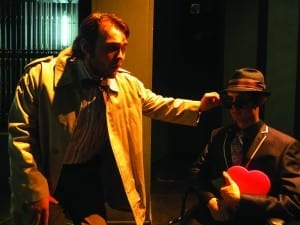 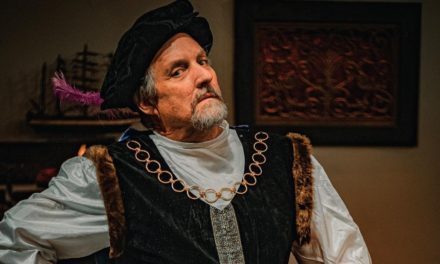