PROVO — Something about theatre and film fascinates us as a culture; as an audience, we want to know what happens backstage and off screen. Part of it is our obsession with celebrity. But we also long to know the performers we see on stage and screen; we want to know how like—or unlike—their characters they are, how they act, how they live. BYU’s newly opened production of the classic play Stage Door offers a captivating look into the difficult life of an actor.

Director Stephanie Foster Breinholt turns the whole production, quite literally, into a black and white movie circa 1936. From make-up and costumes to furniture and props, everything on stage is in some shade of black, white, or gray. Between scenes, legends such as “ONE MONTH LATER,” are projected on the same screen that plays newsreels and the play’s very, very cool opening credits sequence at the top of the show. If this all seems a risky proposition, it is; but I think, assisted by the intimacy of the space, it pays off wonderfully. I got a little gleeful at the idea, I’ll admit.

Breinholt has the support of a team of designers whose work, when taken together, has a fantastic wholeness to it. Jesse Baldridge’s stark lighting employs temperature rather than color. Costume designer Melanie Lamb does a great job with color selection; not every garment is exactly black or white or gray, but her choices work well with Baldridge’s lighting to trick the eye into believing they are, as do Janell Turley’s make-up designs.

The play takes place in the common room of the Footlights Club, a boarding house for actresses looking to make their mark on Broadway. Much like a college dorm, turnover is high as girls come and go, work and rehearse, and succeed and fail. There are so many characters, in fact, that nearly all of the cast play multiple roles.

It did take me a bit to adjust to the style of the piece and to sort out who a lot of the characters were before I knew what story I was supposed to follow. Despite all of the people coming and going, there is basically just one story happening that is reflected, to some extent, in all the others: Terry Randall (Alexis Rose Monnie), a talented actress from a small town, is looking for her big break and might just find romance along the way.  The play doesn’t glamorize acting as a profession; rather, it does the opposite, showing how hard these women work, not only at their art but at all kinds of day jobs, just trying to make ends meet. Though the main plot focuses on Terry, the play shows flashes of hope and tragedy in a number of the other girls’ lives.

The performances are strong for the most part—there are too many for me to name them all, unfortunately—and Breinholt has her cast shifting from comedy to drama constantly, another way in which the play feels quite real. Kudos to the cast for doing well with the difficult task of doubling. One example is Lisa Stoffer, who portrays the somber Kaye, who’s had more than her fair share of troubles. Stoffer also plays the free-spirited housekeeper Mattie, which I didn’t realize until after the show and a closer look at my program.

Alexis Rose Monnie’s portrayal of Terry is the anchor of the show; her ambitions and difficulties are relatable and honest. As Terry, Monnie is likable and believable; I appreciated very much that she knew what she wanted out of life and fought for it. As Terry’s good friend Judith, Kelly Marie Hennessey is sharp, funny, and grounded. Becca Ingram, playing another housemate Kendall, does a great Katherine Hepburn impersonation, which serves as a nice little wink to the 1937 film Stage Door, which features Hepburn as Terry.

Because of the slice-of-life style of the piece, the action does slow in spots—the first act is nearly an hour and half, though the second is considerably shorter—but Breinholt and company do their best to keep things moving along. The ensemble overall shares a great rapport; I had no problem believing that this was an actual boarding house, filled to the brim with friends who share the same hopes, dreams and ambitions.

If you love movies, particularly the classic black and white ones, Stage Door makes for a fun and enlightening evening. If you go, there are several nifty short films—made in the style of 1930s movie newsreels—featuring the cast and crew that begin playing at 7:15 (curtain is at 7:30). Be sure to be early so you won’t miss out.

Stage Door, produced by the BYU Theatre and Media Arts Department, plays every day, except November 2, 7, and 8 through November 13 in the Margetts Theatre in the Harris Fine Arts Center on the BYU campus.  Show times are 7:30 PM for November 3-5 and 9-13, and 2 PM on November 6.  Tickets are $7-14.  For more details, visit the BYU Arts web site. 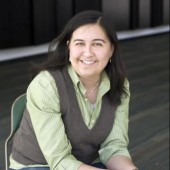