SALT LAKE CITY — The University of Utah has a reputation for doing difficult and lesser-known shows. This is by design, as they strive to push their students and Utah theatre as a whole. Their latest show, Floyd Collins, fits the type exactly. Unfortunately, this challenging script is also not very cohesive, and the efforts of the university fall short. 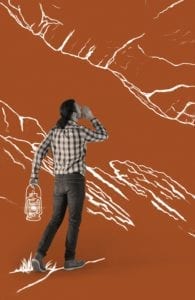 Floyd Collins follows the titular character, played by Derek DuBay, as he goes underground to explore the caves of Kentucky looking for “the big one.” He is driven by the hope of fame and fortune. After finding the perfect cavern, he is trapped by a cave-in, which pins his legs and arms under fallen rock. Floyd is soon found by his family and members of the town, but the issue is how to get him out of such a tight spot. Reporters show up and start turning the story into a national spectacle. The popularity of the story brings droves of people to the small hillside, and tempers flare as repeated attempts to save Floyd fail, and loyalties falter.

The script by Tina Landau and the music by Adam Guettel were the main problems with this production. The story tries to analyze the effects of a media frenzy on a small town, but it is also trying to tell too many stories: a family falling apart, a reporter befriending the victim while trying to make a name for himself, the idea of belonging in a small town, land disputes, commercialism in times of tragedy, yellow journalism, exploitation by Hollywood, and the confusion that was the rescue effort. This leads to the show having so many characters vying for audience attention, that it is hard to follow any of the stories or to particularly care about the characters because the script does not spend enough time on anyone to allow an emotional attachment to occur. 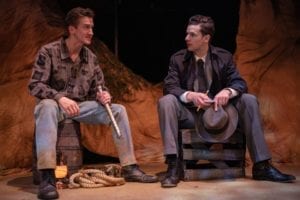 The music (supervised by music director by Alex Marshall) was also muddled and seemed too difficult for the cast. The songs are advertised as “bluegrass and Americana inspired.” However, this inspiration was then mixed with Sweeney-era Sondheim. The music had a number of phrases that seemed to run all over the place, and rather than landing on a note, would instead dance around some more. The complexity of the music, in many cases, seemed to be too much for the actors. Many especially struggled to find the power necessary to sustain the runs in their lower register.

Despite all of this, there was a significant amount of talent among the cast, and some of the songs were quite good. When a number drifted closer to a pure bluegrass sound, the cast did an excellent job. I was a particular fan of the quartet “The Ballad of Floyd Collins,” specifically the second reprise in Act II. The sound was rich, clear, and evocative. The show-stopper of the evening was “Is That Remarkable?” which comes right after intermission. It felt about as traditional Broadway as it gets, and the cast and audience loved it. There was an energy and excitement during that song that was missing from much of the show. A company song, it featured three reporters (played by Dylan Burningham, Caden Tudor, and Fynn White) eavesdropping on the locals’ conversations to grab headlines. This song was also one of the strongest showings from director and choreographer Denny Berry. There was energy and cohesion among the cast throughout this song, and it was one of the strongest moments of the night. 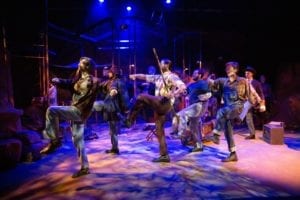 The acting itself was commendable. DuBay’s performance as Floyd was a highlight. He was both honest and genuine. The relationship between Floyd and his brother, Homer (played by Chase Quinn), as well as the reporter Skeets Miller (played by Cameron Holzman) was one of my favorite things to watch. There was a bond between these characters, and I felt the tension and fear that came from the waves of uncertainty that would break over each of them in turn. DuBay’s performance was all the more impressive considering he spends over half the show either in darkness or on his back under a pile of rocks. Quinn also turned in a great performance full of energy and heart, while Holzman made me enjoy his outsider character. The southern accents adopted by the cast were never obtrusive or distracting.

I also want to mention the excellent performance of Fiona Hannan, who plays Floyd and Homer’s intellectually disabled little sister. Playing a character with disabilities, especially one written in a different generation, can be a challenge. Being able to find nuance of the character while still maintaining the disability is tricky, but Hannan walked the line very well, and avoided just playing a stereotype. She also had a great voice and was one of the best at handling the difficult score. Her song “Through the Mountain” was excellent, and showed the beautiful care she had for her brother. 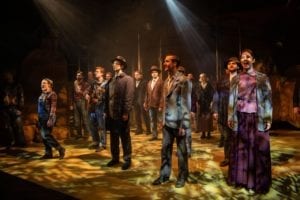 The unit set, designed by Kiersten Farley, full of twisted ladders and massive rocks, created a playground for the actors, complete with slides and monkey-bars. It allowed Berry to create some really intriguing stage pictures throughout the show. The sound design (by Emily Chung) helped transport the audience to the underground cavern through the use of an echo, dripping water, and falling rock soundscape. One of the most unique sound designs in the show was “The Call” in which Floyd sings in a loop effect with his own echo. The costuming (by Chloe Mason) was effective in showing the division between the Kentuckians and the outsiders, as well as setting the time period. However, it was not clear at first that it was supposed to be winter. Later on when the police officers came in wearing heavy coats, it was a little confusing when compared to some of the light clothes others were wearing.

The lighting (designed by Nickolaus Bellindir) was effective for the majority of the show, though there were a few choices that I feel did not work as well. The beginning of the show has Floyd searching through caverns lit only by his small oil lamp. This scene lasts for about 15 minutes, during which the only light was from Floyd’s prop lamp, as well as a few areas on the back wall which were barely lit. The effect was probably an attempt at realism and the darkness of the cave, but it made it really difficult to see DuBay’s facial expressions and his acting. When Floyd gets stuck, his lantern has gone out, and he is in complete darkness, but the walls on the opposite side of the stage are still lit up. The audience is looking for somewhere to focus (since no one can see Floyd) and ends up staring at a blank wall, listening to action happening in the dark. I understand the desire for the realistic effect, but 15 minutes is a long time for the audience to not be able to see.

While the desire to challenge students is an extremely admirable mission, and there are many individual moments of beauty in this show, the script and the music let down this production in a big way. There is a lot of potential in Floyd Collins, the production team did the best they could, but the show just felt stuck.