SALT LAKE CITY — The year is 1994 in a mental hospital. Patient and Doctor enter a stark holding facility, there to discuss the particulars of Patient’s incarceration. The two share interesting discourse centered on the notion of Patient’s ability to communicate with the dead. Doctor seems keen to form a relationship with her client, even with charges of murder on Patient’s record. Patient is incredibly open and honest, charismatic even, and lends Doctor to believing that despite an insanity plea, her client is entirely sane. Refreshingly sane, even. Patient reassures Doctor that, despite her sanity, no jury in the world would have found her innocent. She speaks to the dead, after all, and still committed a murder. But for what reasons? Audiences are strung along in a thrilling tale, laden with mysticism, wit, and incredible twists and turns. This thriller centered around a beautifully penned script. Playwright Camille Washington commands the audience masterfully in Oda Might, words weaving one of the most intense and satisfying theatrical experiences I’ve encountered. There was an ebb and flow to the pacing. Just as things felt settled, the very next thrill would come—much like a roller-coaster ride. I felt exhilarated and keen to know more, oftentimes literally sitting at the edge of my seat. Her exchange between the characters felt natural and offered a glimpse into an actual counseling session, versus watching a play.

As entertaining as the whole play was, Washington managed to tap into many parts of society that are glossed over. It was refreshing to see a cast comprised of all women, all of color. With the events of Black Lives Matter, it was a wholly relevant refresher on the justice system as it pertains to modern America, and it offered me extra insight that I had not before considered. Mentions of sexuality were not a big deal: they simply were. There were no stereotypes on stage, only refreshingly real representations of people. It was both engaging and educational. This script alone made me excited for the future of theater in Utah. 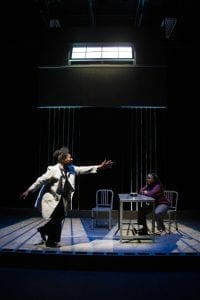 Set design (Keven Myhre) positioned the audience into a stark mental facility, with very little in way of decoration or joy. Cinder blocks positioned around the stage created the feeling of an enclosed room with only one window to provide any sort of view. It worked incredibly well. I felt as though I was peering into a private counseling session. Lighting (William Peterson) followed along a similarly desolate feel, though a few choice lighting decisions helped to convey new depth and structure to the scenes. I enjoyed the cues that spoke to action happening outside of the room. As cohesive as all the technical elements were, I most appreciated that they didn’t detract from the show. I have seen plays where spectacle was all that mattered. In this black box show, it was still intimate and allowed for the actors to shine.

As Patient, Dee-Dee Darby-Duffin radiates. She’s charismatic and possesses a natural control of the stage. She’s one of those actors that could read the phone book, and I’d sit there captivated by her every word. Darby-Duffin’s portrayal of an inmate was so casual and accepting, but hearing her character reflect on her past life hinted at some real tribulations. Every word was laden with meaning, and the way Darby-Duffin described her character’s journey painted a vivid picture. She brought empathy to a character who you wouldn’t expect to have much, and portrayed the burden of her medium talents with grace. Again, it felt so real. Yolanda Stange contrasts Darby-Duffin as she portrays a pragmatic doctor, clearly invested in the stories of her patient. Stange’s character has an interesting mental journey and portrays the steps into that journey with dexterity. Stange’s poise on the stage, combined with a character’s unraveling, becomes poignant to watch. The two actresses’s give and take was incredible; these women are powerhouse actors. Kudos to director Cheryl Ann Cluff for showcasing such a vulnerable work and guiding these actors to shine.

All in all, I cannot recommend Oda Might enough. It is a brand new work, showcased by the David Ross Fetzer Foundation for Emerging Artists. Washington’s script really resonates in this setting, and I would highly recommend anyone wanting to be challenged and thrilled by theater to come to see this show. It is clever, mysterious, hilarious, and devastating. Moreover, the staff at Plan-B Theatre Company is incredibly professional and accommodating. Take a chance on Plan-B with Oda Might.

Plan-B Theatre Company’s production of Oda Might plays in the Rose Wagner Performing Arts Center (138 West 300 South, Salt Lake City) through November 17, 2019, Thursdays and Fridays at 8 PM, Saturdays at 4 PM and 8 PM, and Sundays at 2 PM. Tickets are $22. For more information, please visit their website.