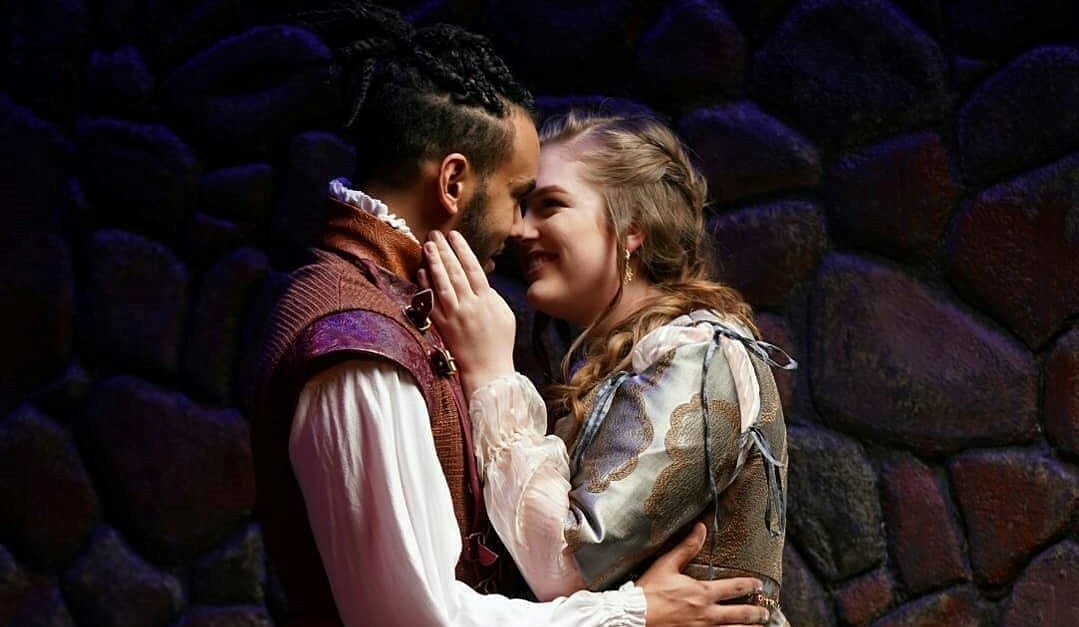 SALT LAKE CITY — Othello is “not an easy show,” Westminster College’s director Jared Larkin says in his director’s note. He’s not just talking about the word count, either. The strong emotions, steep character arcs, and intimate violence present a challenge to any theatre company. Westminster’s production of Othello rose to the challenge. They showed solid acting, made strong thematic choices, took some risks, and (while still lacking in some areas), made me forget that I was sitting in a chair for almost 3 hours.

The opening scene was the first shining moment in this production, as multiple elements came together. The versatile set and lush costumes gave me an immediate sense of Shakespearean place. At center stage a priest performed the wedding of Othello and Desdemona. Desdemona (played by Samantha Miller) bounced with delight as Othello (played by Tristan Johnson) laughed with joy. Johnson’s portrayal in this opening scene established him as a sympathetic character. Off to the side, Iago (played by Aidan Croft) watched with pure, unmasked contempt. Spencer Brown’s lighting and sound design wove together to convey both the joy and the jealousy of this moment that occurred before any Shakespearean dialogue. The director’s choice to portray this scene established the main themes of the show without a word being said.

The scenes that follow are full of exposition as the audience learns Iago’s motivation for his hate and the beginnings of his plot to unravel Othello. Croft’s mastery of Shakespearian language and his ability to project and articulate were crucial to the success of these next scenes. In the first minutes of the show, Croft showed the depth of Iago’s manipulative capacities. Croft also rises to the challenge of Iago’s direct addresses to the audience. Breaking the fourth wall often feels awkward, but Croft spoke to the audience naturally. However, Croft’s asides missed the opportunity to create sympathy in me for the character of Iago. 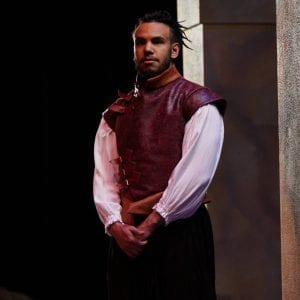 Johnson’s Othello was strong in the first two acts, despite his voice often sounding muddy from a lack of clear articulation and poor projection. His confidence during Brabantia’s criticism in front of the Duke, punctuated by his self-assured laugh, was fantastic. His displeasure at Cassio’s brawl showed a judgmental and unforgiving side that foreshadows later events. And when Iago first plants seeds of doubt of Desdemona’s faithfulness, Johnson again artfully employs the laugh. (That was my favorite moment of Johnson’s interpretation of Othello.) But the turn to doubt and then jealousy happened too fast. Indeed, it happens fast in the script as well, but I would like to have seen the struggle play out on Johnson’s face. Instead, it was like a switch was flipped. However, Johnson’s version of insane jealousy had some really excellent moments. His wild eyes and shaking, even to the point of a convincing seizure, were engrossing.

Collin Voeller’s Cassio, overall, was solid. When Othello is demoting him, Cassio’s pain is real. When Cassio is resisting Iago to take a drink, Voeller’s portrayal is relatable and endearing. And while his drunkness needs some work and I cringed when he shouted “Repuation, reputation, reputation,” Voeller portrayed the earnest, repentant, immature character of Cassio well.

There were several female performers that excelled. Sydney Schwarzwalder’s Bianca was fierce, without being a victim of Cassio. I found Louise Dapper’s Emilia very compelling. Emilia, as Iago’s wife and Desdemona’s maid, is a complicated character. Dapper showed the full range of flirty, funny, spunky, cynical, wise, strong, and good. She stole the show in her last scene, overshadowing Othello and Iago with her vigorous defense of Desdemona and condemnation of the villainy against women.

The scenes between Miller and Dapper were moving in their sincerity. For much of the play, Desdemona’s love for Othello seems forced, as does her famous charm such as when she is trying to persuade Othello on behalf of Cassio. In the final two scenes, however, Desdemona’s anxiety and anguish are poignant. Miller portrays a Desdemona that has personal power instead of the sweet, innocent victim Shakespeare wrote. Her singing of the “Willow” song was beautifully haunting. Her final scene with Othello is not of a simpering, helpless woman. Instead of a victim, Miller portrays a fighter.

In contrast, Johnson and Croft’s portrayal in the final scenes are underdeveloped. When Othello discovers his mistake, I did not see in Johnson or feel the anguish, guilt, or despair this kind of revelation would invoke. Likewise, Croft’s Iago seemed flat in his final scene. There was no sense of triumph at the moment of his victory or even the visceral contempt Iago had shown earlier. The undeveloped chemistry between Iago and his wife Emilia also contributed to this scene being a missed opportunity for Croft to prompt sympathy from the audience, or at least demonstrate Iago’s depth. However, the strength of Dapper’s performance carries the scene, and it is nonetheless a satisfying (for a tragedy) conclusion to one of Shakespeare’s most difficult plays.

The production team made some strong thematic choices, including changing several male parts to female roles seamlessly. Exchanging an angry father for an outraged mother via Brabantia fit well with the production’s theme of female power. Val Tholen’s portrayel, however, left me unmoved. While her articulation and command of Shakespearian language was pleasant, her passion needed more dynamic levels and nuance. With more depth she could invoke the sympathy of a mother. Changing Rodrigo to Rodriga worked well because of Maggie Minshew’s portrayal. She excelled particularly in her peevish frustration with Iago. Lodovica (instead of Lodovico) was a great director’s choice for offering an indictment of misogyny in the final scene, but the opportunity was missed as actor Madison Parker’s delivery lacked power because it felt like she was merely reciting lines. Still, it was refreshing to see the addition of female characters done in a way that furthered the themes of the play and the appetites of a modern audience. 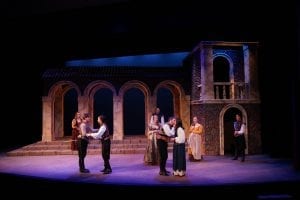 A scene from Othello.

Like the director, the sound designer, Lexi Corpron, took a lot of risks. The overall feel of her design was primal and raw—definitely not stereotypical Renaissance. Some of the risks paid off, like in the opening scene, right before intermission, and Desdemona’s procession to her deathbed. The modern notes in some of the choices gave a transcendent or timeless feel to the story and its themes. But some of the choices were problematic. For example, during Cassio’s brawl, an erratic bell completely obscured the dialogue on stage. Likewise, when Othello enters the room to murder Desdemona, the music distracted instead of augmented the feeling of the scene.

Fight choreographer Zac Curtis added so much physicality to the play, and Curtis outdid himself in the strangling scene of Desdemona. There is a full-on chase around the room, scratching and biting on the part of Desdemona and Othello has to exert himself to carry out his murder. The drama and passion and flawless direction and execution of this scene left me breathless. The director’s choice to cut Desdemona’s final lines fit especially well with a stronger version of Desdemona and modern sensibilities.

While it was not perfect, I liked this production of Othello, both as a theatre buff and an Othello fan. Even someone not familiar with the story would be able to understand and enjoy it. The play does contain mature themes and violence that limit what audiences this show is appropriate for, though. (The strangulation scene could be especially triggering for some people.) The theatre itself is a comfortable and intimate size providing a great environment to see good Shakespeare. For $12 per ticket, this Othello is fantastic deal.

Othello plays nightly in the Courage Theatre in the Jewett Center for the Performing Arts building on the campus of Westminster College through April 11 at 7:30. Tickets are $12, or free for Westminster students, staff, and faculty. For more information, visit https://app.arts-people.com/index.php?show=88067. 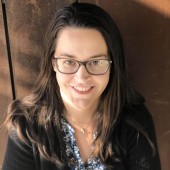 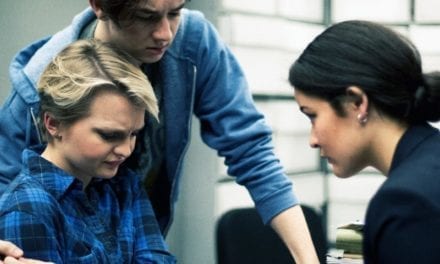 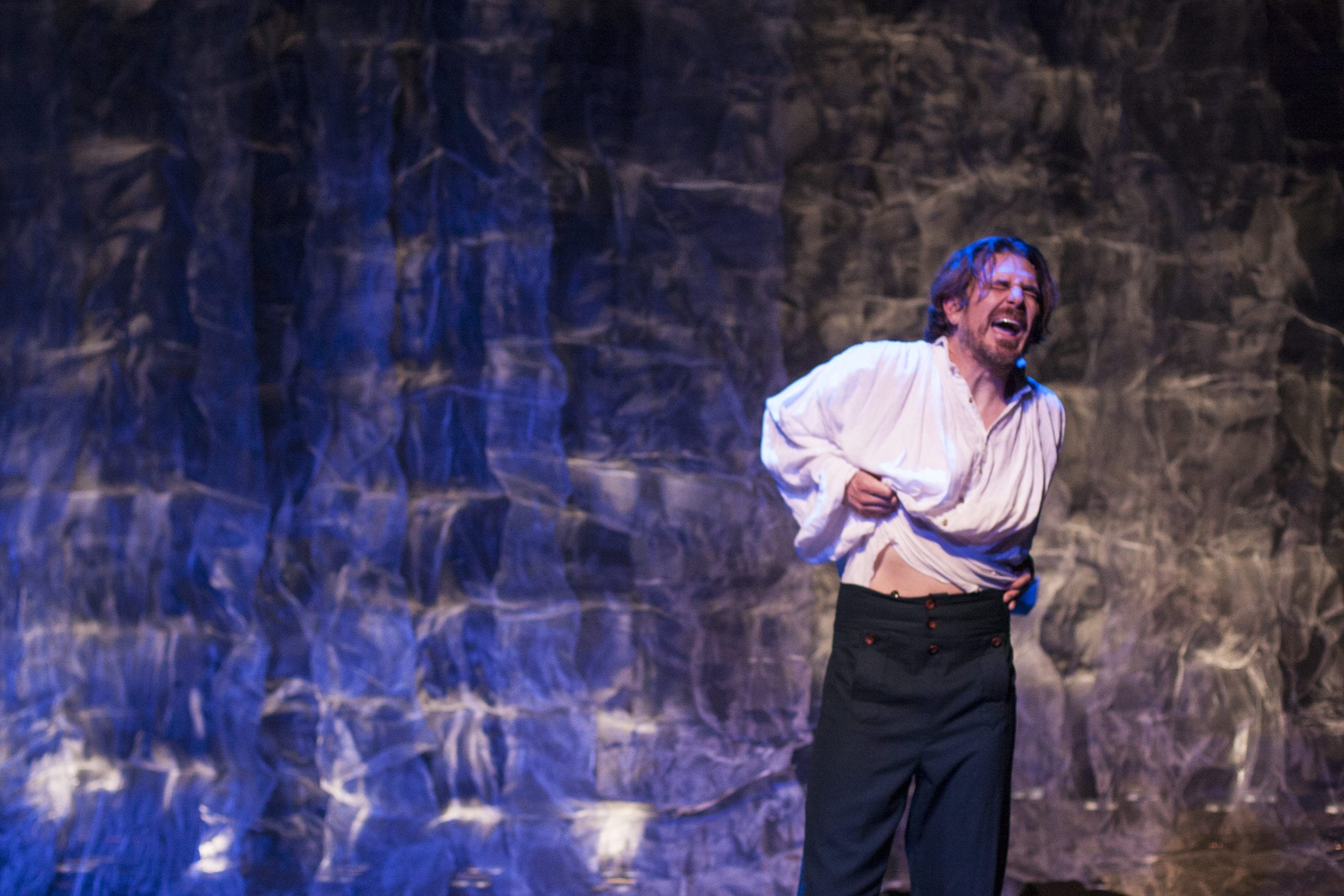