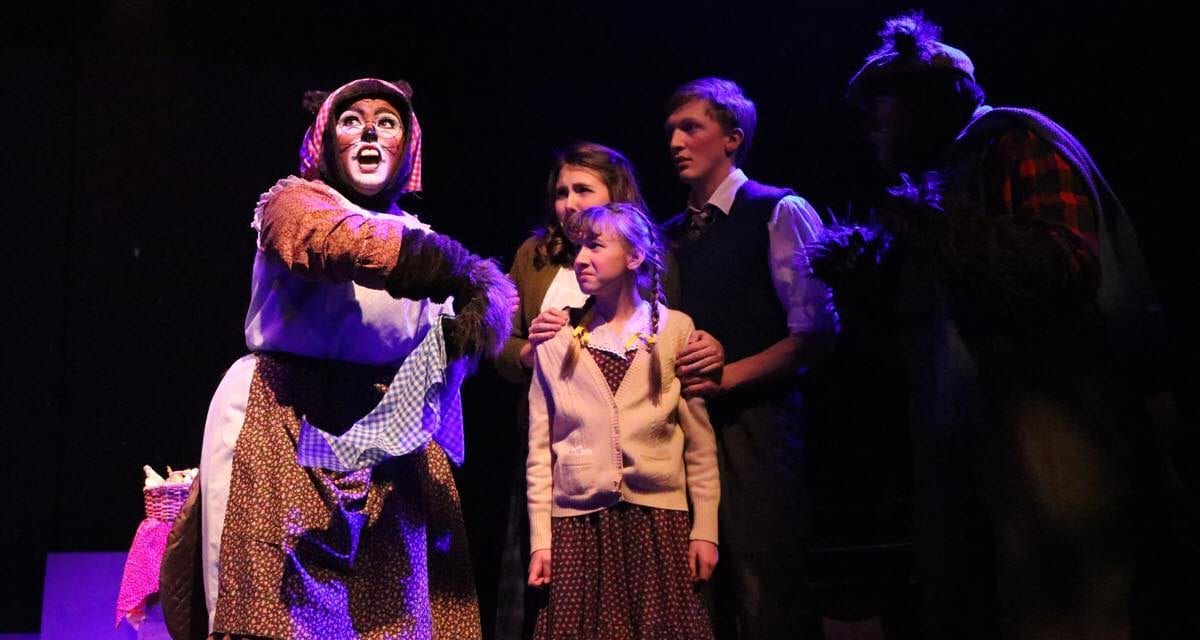 SOUTH SALT LAKE CITY — The Lion, The Witch, and The Wardrobe is a classic story by C. S. Lewis that teaches children about Christ. I had never considered it to be a Christmas story, even through Father Christmas does briefly appear. However, after seeing this beloved tale, adapted and directed Joanne M. Parker at the Utah Children’s Theatre, I am beginning to think it is a perfect show for the Christmas season. 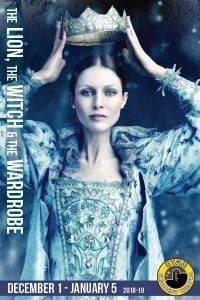 The Lion, The Witch, and The Wardrobe tells the story of Lucy, Edmund, Peter and Susan, four siblings who are evacuated to the English countryside during World War II. As they explore their host’s house Lucy discover the magical land of Narnia hidden at the back of a wardrobe. She and her siblings go to Narnia, where it is “always winter and never Christmas” under the tyranny of The White Witch. With the aid of Mr. and Mrs. Beaver and the other Narnians the children learn about Aslan, the Great Lion and true King of Narnia. With Aslan’s help, Narnia and the children face the White Witch, to put an end to her treachery and tyranny. It is a story of love, sacrifice, justice, and mercy that is rich in symbolism.

The White Witch, portrayed by Brooke Wilkins, was cold and fierce, and an evil queen not to be trifled with. I despised the queen from her first appearance in Narnia. Wilkins did so well in this role that I did not see a performer, but only the White Witch. The only moment I would have like to see the slightest difference was when the White Witch was first manipulating Edmund (played by Wyatt Cernyar). She did not switch to sweetness easily, which is probably an accurate statement for this character, but I found it hard to believe that Edmund would trust her. (He seemed much too smart for that.) 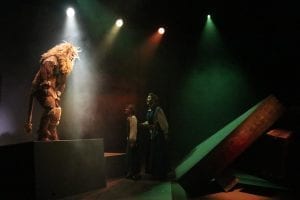 “Is he safe,” asked Lucy (played by Helene Parker) in regards to the Great Lion, Aslan. “Safe?” responded Mr. Beaver, “‘Course he isn’t safe. But he’s good.” This moment of dialogue perfectly captures Brinton Wilkins’s portayal of Aslan, a welcomed contrast to Brooke Wilkin’s White Witch. Aslan was mostly a wild and fierce character, especially in defense of his citizens and the children, but he was selfless and protective. Wilkins did well at not losing the wild cat side of his characteristics in favor of the protective and good side of his character.

In a production that was darker and heavier than most theatre for young audiences, Mr. Beaver (played by Christopher Taylor) and Mrs. Beaver (played by Ashley Breitenstein) were a breathe of fresh air. Their physical movements, especially the shaking of their tails and the rubbing of their noses, helped lighten the general mood of the show. This was especially obvious in the scene were Mr. Beaver is leading the children back to his home, who begin to imitate his walk and frolic in the snow. These light moments were needed in this production and were performed with as much care as the intense scenes. 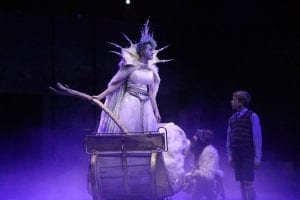 The costumes designed by Julie Anderson for the animals and Narnians were classic, rather than cheesy. They reminded me more of a ballet than a stereotypical production for young audiences. Furs, head pieces, and makeup (designed by Meighan Smith) created the majority of animal costumes. Flowing robes in rich and natural tones created the dryads, naiads, and gods. The only animals that were perhaps not as wild in appearance were Mr. and Mrs. Beaver. However, until I penned this observation I had not even realized I had made it. The contrast apparently was not distracting to me. However, I do feel the need to comment of the amazing work of Cole Lawson (in the role of the faun Mr. Tumnus) because he to walk about on his tiptoes, in shoes only on his toes, the entire time he was on stage. It made his faun costume incredibly realistic, but must have been an exhausting calf workout. 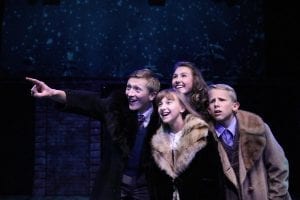 The set and light design, both by James B. Parker, were ideal for a show with very contrasted locations. Simple set pieces helped create various locations, while the light design and projections created the magic and beauty of Narnia. I loved the use of the snow dancers to assist with scene changes in Narnia and to create a mystic abeyance. Their dancing with fabric pieces, along with the lighting effects on the fabric, helped create a new world not only visually, but also emotionally. Another standout moment of light design was during the White Witch’s stone table ritual. This scene sharply contrasted to the cold, snowy scenes earlier in the production. The lighting was intense, and conveyed a mood full of fire, heat, and a thirst for blood, which created a scene so tangibly and electrically charged as it crescendo-ed to its culminating moment. It scared small children—as well it should have.

This production was a bit dark for some of the youngest audience members, as UCT warns on its website and at the box office. My child, who is the theatre company’s minimum age to attend their productions, spent a good portion of the show hiding, turned into my side. There was a child just behind us, a couple of years older than mine, who was audibly frightened during the scenes with the wolf, Fennis Ulf (played by Tennessee Tarrant), during White Witch’s ritual at the stone table and during the battle scene. This is not an ideal show for sensitive children who frighten easily. However, UCT does offer some resources and suggestions on their website to help children prepare to view this production.

This production of The Lion, the Witch, and the Wardrobe so beautifully accomplished each emotional rise and fall in the story. So heart wrenching was the performance of Lucy and Susan (played by Maggie Lea) as they mourned their champion. And how glorious were their reactions to what happened next. As I quietly whispered in my child’s ear some of the symbolism of the characters, tears came to my eyes. For audience members who enjoy C. S. Lewis’s Christian symbolism, this show is worthy of their time. The symbols are there for those seeking them out, but they are not so obvious that they become preachy. But for those who merely want to enjoy a tale adventure, bravery, sacrifice, and triumph, this show is also a must-see.

The Lion, The Witch, and The Wardrobe plays every Friday at 7 PM  and Saturday at either 1 PM and 4:30 PM at the Utah Children’s Theatre (3605 S. State Street, South Salt Lake City) through January 5. Tickets are $16. For more information, visit uctheatre.org. 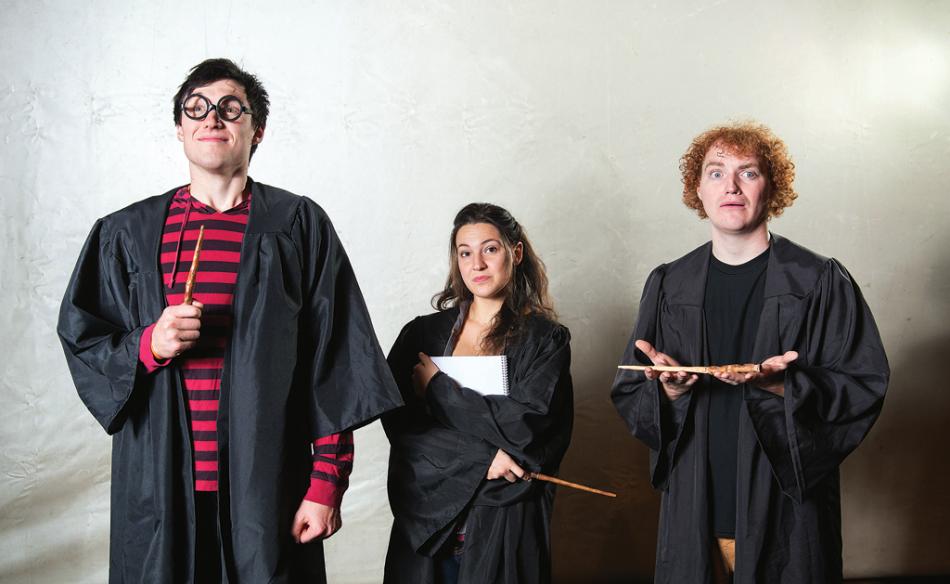