SALT LAKE CITY — KOF 77, written by L. L. West and produced by Utah Repertory Theater Company, is a one man show starring the hilarious Ryon J. Sharette as “the King of France, the Sun King, Louis Quatorz, Le Ro Soleil, Louis Le Grand, Louis Le Gran Monarque KOF 77,” as he introduces himself many times. Due to the heavy French accent masterfully utilized by Sharette and my less than stellar understanding of French history, it took me a few beats to completely grasp the concept of this show, but when I did, the humor was so evident that I have a joyous time for the rest of the production. 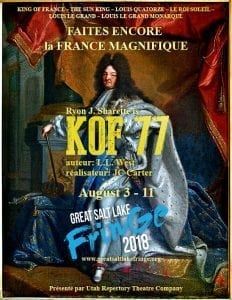 Sharette portrays a confident to a fault King Louis who adores more than anything the act of being adored.  Satirizing not only the life of King Louis, but modern parallels we see in modern American government, this production was a humorous yet bittersweet discussion of how politics can be ever evolving yet somehow be so consistent. While really focusing on getting the audience to laugh, Sharette as Louis also got me to think about how and why leaders get the fame, attention, and adoration that they do.

Sharette wore a costume credited to Pioneer Theatre Company, and a wig by Cindy Johnson, both of which were exquisite and added a great deal to the visual of the show. I was also impressed with Sharette’s preshow interactions with the audience, and his ability to maintain his role throughout some very difficult dialogue.  Additionally, he excelled at audience interaction and improvisation, essential elements to the flow of this type of one man show.

The Utah Repertory Theater Company production of KOF 77  is part of the Great Salt Lake Fringe Festival and plays various dates and times through August 12. For more details about scheduling and ticket prices at the Festival, visit www.greatsaltlakefringe.org.