HERRIMAN — Ian Fleming‘s Chitty Chitty Bang Bang is a classic children’s tale of a single dad, his two adoring children, and their adventures with a seemingly magical car that floats on sea and air. I hadn’t seen Chitty Chitty Bang Bang since I was a kid, and Herriman’s production (directed by Kristin Housley) rekindled the magic of the story. It made me want ensure that my children have the chance to experience this magical and delightful musical.

I was impressed with the professionalism on Herriman Arts Council (HAC). I’ve been to many opening nights for many community theatres, and rarely does opening night start right on time and run so smoothly, but HAC managed all that and even more. As I took my seat, I had time to examine the curtainless set, designed by Deb Taylor. The painted landscape scenery, although a bit lacking in texture and dimension, was crisp, clean and reminnesent of golden age musicals. The broken down carcass of the car (Chitty) was the perfect center piece. A cool summer breeze flowed through the Rosecrest Pavillion, and the live orchestra was setting the mood as they performed the overture. As the show began the energy from the cast was infectious. 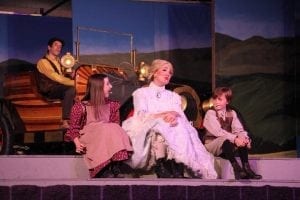 I enjoyed the performances of CC Keel as Jemima Potts and Ethan Marchant as Jeremy Potts. Both children were focused and immersed in their characters. Keel was especially cheery and happy, leaving no doubt that she was loving what she was doing on stage. Both children sang exceptionally well and they blended perfectly together during the opening number and “Truly Scrumptious.”

Speaking of things which were truly scrumptious, I absolutely enjoyed the performance of Julie Barker in her portrayal of Truly. Her voice is beautiful with a clear and controlled vibrato. I can see why the Potts children loved Truly so much, especially as I watched their interactions as they were down by the sea. Indeed, it seemed that all of the children on stage loved Truly. The only moment that I would have like to have seen more from Barker was during the first scene between Caractacus Potts (played by Stephen Tobian) and Truly. Truly didn’t seem aggravating enough, nor did Caractacus seem as bothered by her either. In truth, I might not have known how they were supposed to feel towards each other if the lines in Jeremy Sams and Ray Broderick’s script had not clued me in. But as the play progressed, the relationship between Barker and Tobian did improve, and it made the seaside scene more enduring. 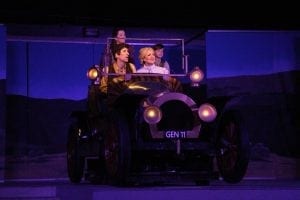 There were so many characters to enjoy in the production. I especially enjoyed the Baron (played by Gerry Graves) and Baroness (played by Marcela Fedderson). These two roles were perfectly cast. Both actors had outstanding voices, facial expressions and characterizations, and “Chu Chi Face” made me want to bust a seam after hearing Fedderson’s vocal range. Another pair of well cast roles was that of Borris and Goran, played by Tevan McPeak and Brent Rindlisbacher, respectively. This bumbling duo would be perfect for a silent film, with Borris even sporting a Charlie Chaplin look. I loved the contrast in height between the two actors, which led to some fun choreography during “Act English.”

Emily Berbert‘s costume designs gave a nod toward this original 1968 film, specifically with the toy costumes for Truly and Caractacus. The Baron and Baroness costumes were also great fun; I thought their tiny crowns were not only comical but extremely appropriate for their characters. I also loved the rich wine color choice for Jemima’s dress and the pattern for Jeremy’s vest. These choices were appropriate for the time period, but they also helped the actors stand out more on stage. Each dress that Truly wore was very flattering and feminine, and I loved Berbert’s choice of keeping her in soft blues. 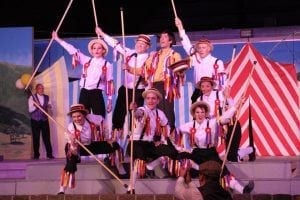 The technical portion of this production was what really set this production apart from most community theatre companies. No corners were cut, especially with the Chitty Chitty Bang Bang car. The woodwork on the car was absolutely gorgeous. I won’t go into details here so I don’t spoil the magic, but the car does everything I hoped it would. All of the props and set pieces were well executed, with the sweet machine and hair cutting machine being among  my favorite props. I loved the working windmill at the Potts’ home and how it doubled as a dishwasher. Due to the design of the set pieces each scene change went off smoothly.

The Herriman orchestra’s live performance complemented the choreography by Jenna Ahlman. There is something extra delightful about attending a musical with a solid live orchestra. My only complaint was that at times the music overpowered the performers, making it hard to understand the lyrics, such as during “Hushaby Mountain.” It was not very hushing, and although Caractacus was doing his best to very his dynamics, the orchestra could have varied theirs a bit more during this number. Balancing microphone volumes with that of a live orchestra is always more challenging during a live performance. I have no doubts, with the professionalism I saw from the cast and crew, that this challenge will be resolved throughout the run, and that Richard M. Sherman and Robert B. Sherman‘s score and lyrics will be given full justice.

In reality, the most terrible thing about this production was that it was so under-attended on its opening night. Chitty Chitty Bang Bang is a real treat, and Utah residents, especially those in Herriman are missing out if they don’t make it to a showing. The ticket prices are much lower than many area theatre productions, and the quality is among the highest I’ve seen in local community theatres. Be sure to act toot sweet and catch this delightful production for the whole family before it’s gone.