PROVO — In a crowded time of the theatre season, the Covey Center for the Arts has chosen a show that distinguishes itself from a sea of Christmas Carol productions: Plaid Tidings. This jukebox musical uses the smooth sounds of the 1950’s in an attempt to bring Christmas joy to audience members. 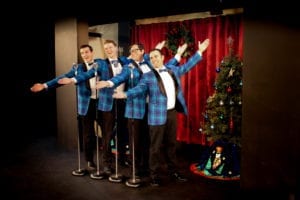 In Plaid Tidings, the four members of the Plaids—an all-male group of crooners—are allowed to come back to earth to do a show. Their careers (and lives) tragically cut short by an automobile accident, the men are thrilled to be on stage again to entertain an audience. If this summary sounds familiar, it’s because the story is the same as the plot of Forever Plaid, the prequel for Plaid Tidings. And therein lies the problem at the heart of Plaid Tidings. The show is a retread of its predecessor that offers nothing new from the characters. In fact, a few of the scenes and at least two songs are a rehash of moments from Forever Plaid, with some Christmas language or lyrics added.

Déjà vu aside, the plot is as thin as tissue paper and just can’t sustain interest between songs. The characters spend most of the first act trying to figure out what sort of show they’re supposed to put on. That 45 minutes becomes painful to watch because the characters struggle to connect the dots to figure out the blindingly obvious. The crawling plot slows down further for Smudge’s rambling monologue or when Sparky tells the story of when the Plaids sang for Perry Como. Indeed, about 90% of Stuart Ross‘s script is padding.

Director Skye Cummins helmed this production, and she embraced the intimacy of the Covey Center’s black box. She directed her actors to be unashamed in their interactions with the audience, which helped build a much-needed emotional connection. Skye Cummins also handled the changes in mood in the show well, and she prevented the potential jerkiness in the transitions to songs like “Christmas Calypso” and “Mambo Italiano.”

But the dancing in Plaid Tidings robs the show of its ability to at least serve as a guilty pleasure. Songs with potential for a lot of fun movement, like “Bésame Mucho” (a tango) and “Holiday for Plaids,” had forgettable choreography, which dampened my enthusiasm for the music. Even when the choreography was stronger, like in “Twuz the Nite B4” or “Cool Yule,” the steps were not executed with enough precision to impress. The program does not credit a choreographer, which probably explains the shortcomings in the show’s movement.

All four actors were cast for their singing voices, and they often serviced the score well. “Sh-Boom” and “Have Yourself a Merry Little Christmas” were some of the best parts in the show because of the smooth, melodious delivery from the men. But even in this positive aspect of the show, there were apparent limitations to this production. Poor first tenor Nathan Winkel (in the role of Jinx) strained to hit high notes in songs like “Calypso Christmas” and “Holiday for Plaids,” and bass Ben Cummins (as Smudge) sometimes had to sing so low that he had difficulty singing loudly enough. Music director Ben Cummins also failed to perfect the tight harmonies needed in “The Christmas Song, “Stranger in Paradise,” “Psycho Christmas,” and others. The overall effect is that most songs are pleasant, but not remarkable. On the other hand, the two musicians, pianist Andrew Walsh and bassist Raymundo Yazzie played perfectly throughout the show and were the most polished performers of the evening.

The four Plaids themselves each delivered nice performances, with Taylor Morris as Sparky being the most memorable. His flirtations with the elderly ladies in the audience and the character’s smooth confidence made him a natural leader in the group. Dave Nutter as Frankie had the most expressive face of the four, and my eye was often drawn to him because of the emotion he poured into his singing. He also made a noble effort in his monologue about Rudolf the red-nosed reindeer, which was several minutes of schmaltzy writing that he somehow made bearable. In the role of Smudge, Ben Cummins gave a touch of realism to the show by giving Smudge a nearly-constant low level of anxiety that I found oddly charming. Finally, Nathan Winkel played Jinx with a nice sincerity that fit well with the show’s simple concept. If there were any flaws in the cast’s acting, it was that they didn’t have a tight-knit sense of unity among them that they would need if they were a musical group that had sung together for years.

But the production relies too much on nostalgia to succeed, and there is no attempt to make any connection with a younger audience. The Plaids open the show by singing “Stranger in Paradise,” watch a 60-year-old clip from a Perry Como Christmas special and give a salute to The Ed Sullivan Show. Almost every cultural reference (such as the Timex watch slogan that one character quotes) is several decades old, but the show lacks the timeless quality needed make it age well. As a result, there is no reason for anyone under 50 to see Plaid Tidings.

Finally, the limitations of a black box space and the small scale of the show mean that Plaid Tidings will never be a visual extravaganza. But that didn’t prevent from seeing some nice lighting effects and a functional and pleasing set. The costumes—consisting of matching plaid blue tuxedo jackets and bow ties in the first act and matching red plaid vests and bow ties in the second act—were flattering on the actors and apropos for the show. My only regret is that the costuming wasn’t push a little further in details. For example, the characters talk about their plaid tuxedos and their cummerbunds—yet they don’t wear tuxedo pants or cummerbunds. Their shoes can use a polish, too. No designers are credited in the program, though Pam Davis is listed as a technical director.

All in all, Plaid Tidings is a sweet trip through yesteryear. But the show consistently failed to wow me, and it doesn’t have enough Christmas spirit to make it a must-see event for most people.

Plaid Tidings plays Thursdays, Fridays, Saturdays, and Mondays at 7:30 PM through December 23 in the Brinton Black Box in the Covey Center for the Arts (425 West Center Street, Provo). Tickets are $14-16. For more information, visit www.provo.org/community/covey-center-for-the-arts.