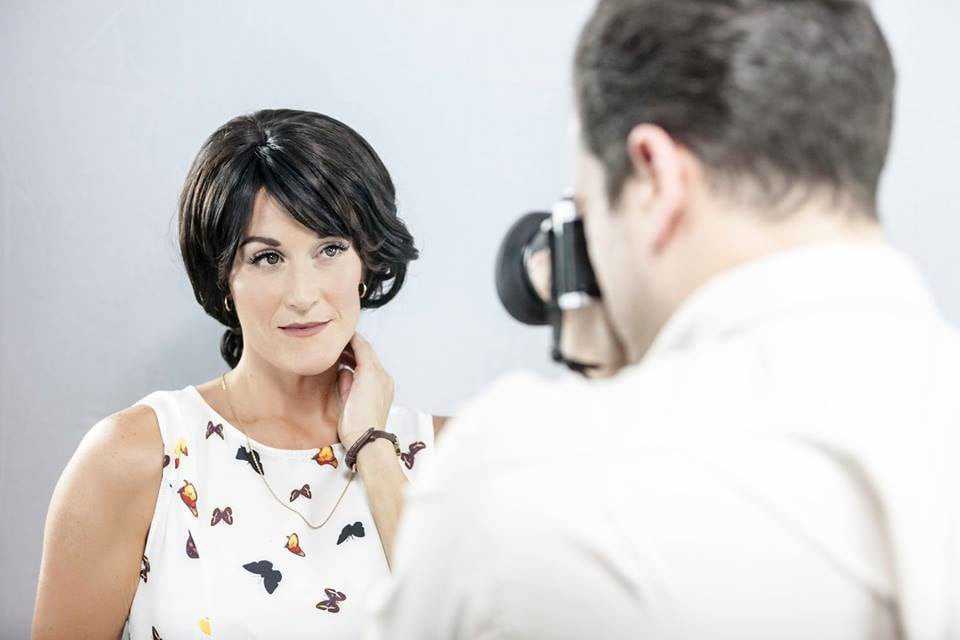 SALT LAKE CITY — The Bridges of Madison County is a new musical about love in its Utah debut. In this adaptation of the famous book (and film), Francesca Johnson is the central character in this story, an Italian immigrant housewife who longs to return to her beloved Naples, but has resigned herself to life on a farm in Iowa. While her family is away at the state fair, a photographer named Robert Kincaid knocks at her kitchen door asking for directions to a covered bridge in the area. What follows are four days of a heartfelt affair between Francesca and Robert, with the question ever looming, “What happens when her husband and children return?”

As one entered the Regent Street black box theatre at the Eccles Theater where Utah Repertory Theater Company is housed for this production, there was a noticeable lack of ambiance. There were pictures being projected on the wall depicting seemingly random scenarios, and an orchestra in the corner who could have provided wonderful ambient music, but were not. With a bare stage and no sound but the milling of people moving to their seats, there was a dead feel to the air before the production began. Fortunately, the performance given once the lights dimmed made me all but forget that feeling.

Francesca, played by Erin Royall Carlson, started the show with a lovely tale of moving from Italy and settling into a farm life in Iowa. From the first moment, Carlson’s performance was strong and well balanced. The relationship between her and Kevin Goertzen (playing Robert Kincaid) was beautiful and developed in a realistic manner. There were moments when it was clear that Francesca appreciated the attention that comes with being the center of someone’s focus. Yet, at other times I could see Francesca pulling back, perhaps realizing that her feelings were a bit taboo. The same was true of Goertzen as Kincaid, knowing when to push and when to pull away made for a spectacularly dynamic relationship between the two.

Goertzen displayed a character that was sweet and touching, yet strong and trustworthy. There was never a doubt of Robert’s genuine care for Fran, but more importantly, Robert’s hesitation in doing the right thing was ever present and gave a depth to his character that a less talented actor could have easily lacked. Goertzen’s voice held as true as his acting, with special mention needed for the hopeful feel given to “Wondering” and the matured sadness shown in “It all Fades Away.”

For a show that spends so much of the production focused on two individuals and their relationship, this duo was fortunate to be accompanied on stage by an entire cast of strong supporting characters. Each performer in this cast had stand out moments and gave an honest heart-felt performance. Rilee Crump and Nic Thomas, portraying Carolyn and Michael Johnson (respectively), were an angsty teenage treat. (While one might not normally consider “angsty” to be a positive descriptor, it most assuredly is in this instance.) Crump and Thomas’s characters were delightedly unique and necessary to the proper development of the story. “The Real World” was a specific highlight instance for both actors, who portrayed their characters’ need for something more and different wonderfully. Bud Johnson, husband of Francesca was played by the talented Josh Richardson, who brought loyalty and a feeling of tough love to the character. Bud had a unique, if strained relationship with each of his children, and he showed his love for his wife in ways that most working husband’s do. His moving ballad of “Something from a Dream” was a touching balance of wanting to spoil and care for his loving wife and the need to provide for his family. Many modern fathers and husbands will be able to find parts of himself in the character Bud.

As the relationship developed, both the foundations of the show, including the script by Marsha Norman, music and lyrics by Jason Robert Brown, and the directing of Johnny Hebda and Chase Ramsey, combined well to create a story that didn’t feel like a dirty affair by an unfaithful wife. Instead, the show’s creators and directors created told a story of true love found in the most unfortunate of circumstances. While the thematic elements of this production are adult, there were several times in the show that could have pushed the line and leaned toward crass. Yet, the decision was made to keep the show appropriate and mature, making the situation one of love and not lust.

Of special note in this production was the orchestra, conducted by Jeanne McGuire. Anyone familiar with the intricacies of Brown’s music knows the challenge his scores present. But McGuire and her musicians delivered a beautiful sound, full and strong, particularly through the tricky transitions between numbers.

It is not my place as a reviewer to spoil the ending of story for you, but simply to critique and leave recommendation of whether or not to see the production. In this case, the performances of Carlson, Goertzen, Richardson and company deserve to have a ready audience to experience their story. I recommend that readers don’t just find the time, but make the time to see The Bridges of Madison County and experience a love story unlike any other.

The Utah Repertory Theater Company production of The Bridges of Madison County plays Fridays and Saturdays at 7:30 PM and Saturdays and Sundays at 2 PM through December 10 at the Regent Street Black Box of the George S. and Dolores Doré Eccles Theater (131 South Main Street, Salt Lake City). For more information, visit utahrep.org.