SOUTH SALT LAKE — Utah Children’s Theatre production of The Masque of Beauty and the Beast is a creative approach to the old fairy tale. The play was so enchantingly performed and each scene so well directed that my 4-year-old and I both had a good time. 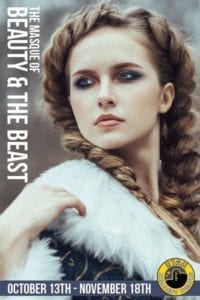 I was surprised when the show began that everyone was speaking in rhyme. I wasn’t expecting the Disney version, but I hadn’t anticipated dialogue (from an uncredited playwright) that is reminiscent of Shakespeare. Yet, the language was actually very easy to understand, and any fears that I had about the heightened language were soon gone.

Director Landon Kracek did a wonderful job in using the space in fun ways, especially for how the Grotesques moved and acted. The blocking and can involve audience members from all three sides of the thrust stage without making anyone feel left out of the show. One of my favorite moments was in the Solicitor’s house and one of the Grotesques was crouched under the table enjoying a mug, and the Solicitor nudged him out of the way with his foot so he could sit and put his legs there. It was such a cute and funny tidbit added to a very harsh scene that it was greatly appreciated. I also liked how he had the Grotesques change character, for in the same scene the Solicitor mentioned calling the police and suddenly a tall Grotesque with a long-nosed mask became the policeman, staring down his nose into the merchant’s face.

Beast was played by Lucas Vayo with great skill. The change from being such an angry brute to someone who could feel and give love was reward. Vayo’s expressions were so enhanced with the stage makeup that the emotion he portrayed was very scary and at times very moving. I admit I cried when he lets Beauty leave him to help her father.

Sofia Rahaniotis performed as Beauty, and she handled the emotions of the role deftly. Her hands were a little distracting, as she seemed unable to move them much, which lost some of her expressiveness for me, and made it harder to see her in character. Her stage presence was powerful, though, along with Meighan Smith, who played her mean sister Haughtense. Smith was like a constantly exploding bomb of anger whenever onstage, which was pretty hard for Rahaniotis to compete with. Indeed, Smith had a commanding energy that was even scarier than the beast at times. Madeline Thatcher played the other mean sister, Dyspesppsia, and she was a nice contrast to Smith with her whining, moping, and excited but dumb looks. I appreciated the comic relief she brought to a show that was overall pretty dark. 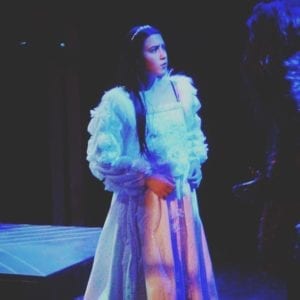 Janice Munk was great as the narrator. She kept the show feeling like a fairy tale and flowing through the next scene. She was also fun to see in movement, always with a spring to her step and a leap or two. The Grotesques had this same energy about them and I really appreciated all of their interesting movements which really kept the show alive throughout the scenes and transitions. The merchant (Beauty’s father) was played by Bryson Dumas, who is pretty young-looking to be playing a father. The makeup artist (Meighan Smith) did a great job with his beard, but I think they may need to add some age lines to make it more convincing. Dumas did some great stunt work with tumbling down the stairs and another fall later on. His power onstage was good, but not as strong as I would wish. There was a moment when Smith is yelling and he tells her to be quiet, and it didn’t seem strong enough to actually shut her up.

The solicitor, played by Kelly Wangerg, is supposed to overpower Dumas and was so mean and evil that the audience booed him more than once. His height was a great asset, and when he and Dumas were face to face, it was obvious who was going to win. I appreciated Wangerg’s brutal acting and not hiding the viciousness he showed. Sometimes these fairy tales are shown in a less serious light, and this one certainly wasn’t, which made it much easier for me to take some good lessons away.

The costumes (designed by Cathy Maurer) in this production were magnificent. The Grotesques were all dressed in black with fancy masks, which were all very beautifully made and intricate. They were often functioned as servants to the characters or helped the scene move along by manning the props, many of which were elaborate and fun. One used brightly colored streamers to indicate a fire while two tall Grotesques created the fireplace by using their arms stretched out toward each other to make the mantle and the other hand resting on their shoulder, as if the mantle had two statues carved into it. The effect simply looked beautiful, and I hope readers can see it for themselves, as I cannot describe it adequately.

I especially loved the Beast’s costume. He had some very intense makeup with horns applied to the forehead, and a heavy-looking fur cloak. The first time I saw him, there were two helpers holding his huge black wings and flapping them as he moved. It actually looked like he was controlling the beating of the wings. He was very scary, yet not too intense for my 4-year-old.

This lyrical version of a beloved fairy tale, though a surprise, was a welcome one. I’m very glad my daughter and I got to enjoy The Masque of Beauty and the Beast.

The Masque of Beauty and the Beast plays Fridays at 7 PM and Saturdays at 1 PM and 4:30 PM at the Utah Children’s Theatre (3605 South State Street, South Salt Lake City) through November 18. Tickets are $9-16. For more information, visit www.uctheatre.org.