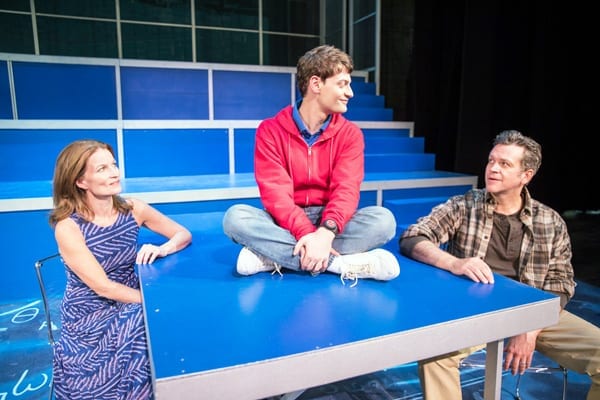 SALT LAKE CITY — People frequently refer to Asperger’s or autism when discussing fifteen-year-old Christopher Boone, the protagonist of Mark Haddon’s 2003 novel The Curious Incident of the Dog in the Night-Time as well as its 2012 stage adaptation by Simon Stephens. However, neither of those words appear in the book or the play. In the novel, Christopher describes himself as “a mathematician with some behavioural difficulties.” Haddon leaves it at that, maintaining that labels aren’t the point, that at its core “it’s a novel about difference, about being an outsider, about seeing the world in a surprising and revealing way.”

Experiencing the world through someone else’s eyes and embracing the disorientation that this induces is one of the most important functions of literature, art, and theatre — and that is precisely the impact that the novel and the original stage production had on me. First produced by the National Theatre in London, The Curious Incident collected both Olivier and Tony Awards for Best Play. While the Broadway production closed last year, a U.S. national tour is still ongoing. The closest it will get to Salt Lake City, however, is Las Vegas (where it begins this week). So the regional premiere at Pioneer Theatre is local audiences’ best chance to see The Curious Incident. Although there is much to admire in director Karen Azenberg’s vision—including some thrilling performances—I came away underwhelmed by how little disorientation I felt.

The “curious incident” of the title refers to the killing of Christopher’s neighbor’s dog, Wellington, a mystery that Christopher (played by Harrison Bryan) decides to solve through detective work. He writes a book about his investigation, which provides most of the narration by way of his teacher, Siobhan (played by Melissa Miller), who reads it out loud. She later convinces him to produce it as a play, which turns out to be the play unfolding on stage, of course. The conceit doesn’t come off as stale and predictable as it sounds.

The original National Theatre production was conceived in the round, but transitioned to a proscenium stage for the West End and Broadway. The set consisted of a literal black box with gridlines, with set pieces and props emerging from the walls and floor. It also served as a projection space to give the audience insight into Christopher’s brain. Among other things, this entailed illustrations or audiovisual interpretations of things Christopher describes or feels. The overall effect suggested that the audience was watching a play staged in his mind. 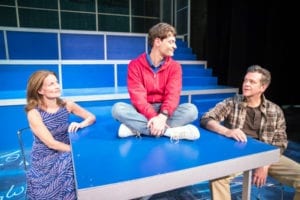 Left to right: Stephanie Howell as Judy, Harrison Bryan as Christopher, and Tom O’Keefe as Ed.

Perhaps the best way to explain the design of PTC’s production is the analog version of what was done in London and New York. Instead of a black box, Daniel Meeker’s set is built around tiered platforms. Like an oversized set of stairs, they rise to meet a transparent backdrop — a sort of window into static representations of geometrical lines and formulae in motion. Once again, everything is overlaid with a grid, and the platforms reproduce much of the functionality of the black box of Christopher’s mind. However, in lieu of automation, the actors manipulate the set by sliding, pulling, and opening the boxes in the matrix to bring about the necessary transformations. Many of the scenes are very short, and so it is important that these changes be made smoothly and unobtrusively. Credit goes to Azenberg and the cast for the meticulously choreographed way in which these metamorphoses occur, keeping them from getting in the way of the forward momentum. Overall, this more conventional theatrical approach works just fine. If anything, Pioneer’s interpretation reveals that, with believable performances, the script doesn’t need to depend on slick and flashy effects.

Yet, this staging doesn’t produce the degree of disorientation that is so essential to the script’s impact. At first I wondered if this was because I was already too familiar with the material, but as the play progressed I realized that it was an issue of focus. For example, in some scenes, Christopher can describe how his brain processes what his senses take in. While riding the train, for instance, he explains that he is unable to selectively filter what draws his attention outside the window, resulting in an assault of images and information. But in other settings, like a busy train or underground station, he might only be able to react with groaning. When Christopher is paralyzed by sensory overload, the original production’s projections and sound design were crucial to approximating his perspective for the audience. This helped to foster empathy by making Christopher’s behavior, which might be hard to understand under normal circumstances, instantly and intuitively reasonable. I’m not proposing that PTC should do exactly the same thing; this isn’t about the specific technology or techniques used. But I am suggesting that, in moments like these, I need to see banal places as someone like Christopher does. I need to see the strangeness that emanates from the world. Everyone has seen people act unusually at a train station; what the audience needs is to see what makes a train station unusual. 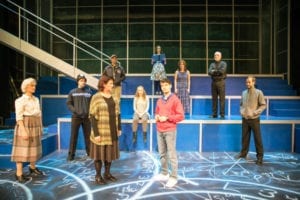 The cast of The Curious Incident of the Dog in the Night-Time at Pioneer Theatre Company.

I was impressed with the performances from Bryan, as Christopher, as well as with Tom O’Keefe and Stephanie Howell as his parents, Ed and Judy. Bryan’s portrayal incorporates distinctive physical and vocal tics without falling into caricature. For example, his leaning posture during an emotional discussion with Ed was at once tense, defensive, and achingly vulnerable. Similarly, O’Keefe (who was memorably brilliant in 2015’s Outside Mullingar) accomplishes an affecting exploration of an inherently patient and kind man when almost every aspect of his life keeps said patience under constant siege. Howell, who descends the tall, diagonal staircase of Christopher’s memory, is a woman haunted by her shortcomings as a parent, what might have been, and what continues to be. She embodies a love and tenacity struggling to find expression and not easily succeeding. Though it is clear that both of Christopher’s parents mean well, it is equally clear that they don’t always deal in healthy ways with the strain of raising their son. Nevertheless, the script is as non-judgmental as it is honest, and allows everyone the dignity of being able to learn and improve without sentimental pandering.

Though the play avoids labeling or diagnosing Christopher, the play’s self-classification as a “curious incident” is fitting. A quote from the Sherlock Holmes short story “Silver Blaze,” it not only hints at some plot symmetry and the script’s dramatic fulcrum, but the choice of the word curious is also revealing. It encompasses both Christopher’s inquisitiveness as well as the strangeness in the everyday that the play must convey. Though PTC’s production of The Curious Incident of the Dog in the Night-Time has much to recommend it, I wish its curiosity were a little more vertiginous.

The Pioneer Theatre Company production of The Curious Incident of the Dog in the Night-Time plays Mondays through Thursdays at 7:00 PM, Fridays at 7:30 PM, and Saturdays at 2:00 PM and 7:30 PM through September 30 on the Lees Main Stage of Simmons Pioneer Memorial Theatre on the campus of the University of Utah. Tickets are $25-49. For more information, visit pioneertheatre.org. 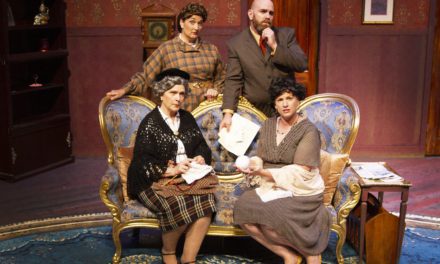