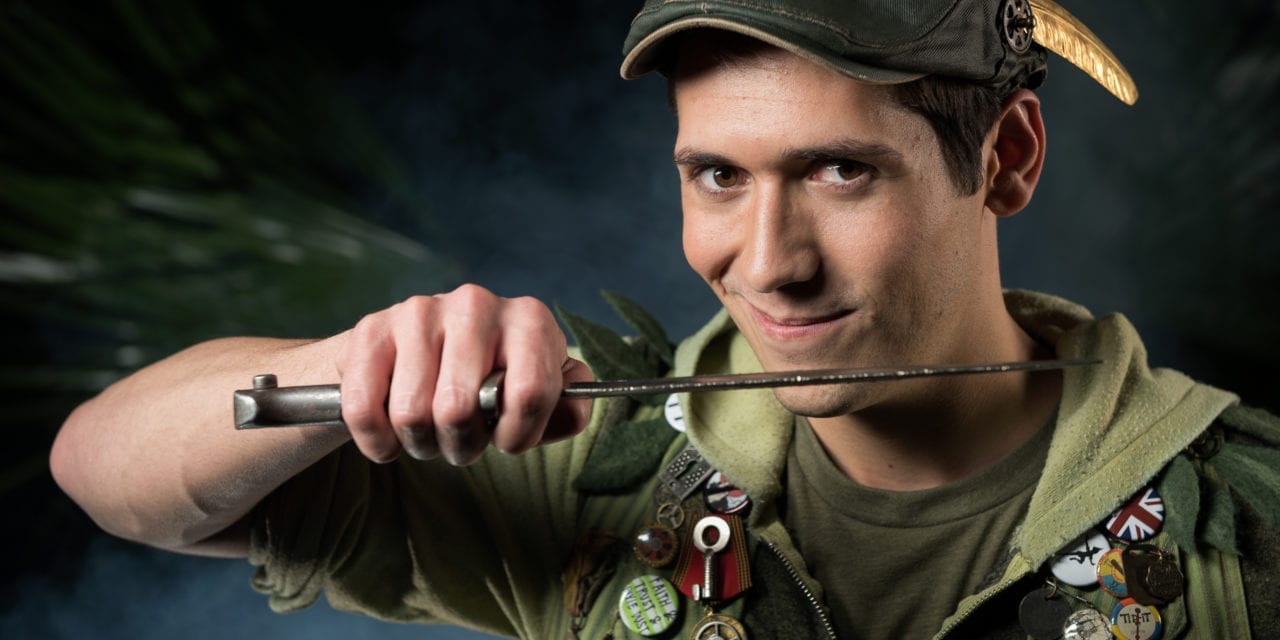 OREM — Peter Pan, by J. M. Barrie, has been thrilling audiences since it debuted in 1904. Since then there have been at least 20 different stage adaptations and variations. I have seen several productions and various adaptations, but after attending Peter Pan at Hale Center Theater, I have now seen my absolute favorite production of the beloved tale.

This Peter Pan is a musical adaptation lyrics by Carolyn Leigh, Betty Comden, and Adolph Green and music by Mark Charlap and Jule Styne. HCTO’s Peter Pan was directed by Dave Tinney, and follows much of the original story line of Peter Pan, the boy who never grew up, and the Darling children. The Darlings fly off to Neverland with him and have many adventures with the Lost Boys, Tiger Lily and the Indians, and Hook and his band of pirates.

As a former scenic artist I always enjoy analyzing sets and I especially love black box style theatre where I can enjoy taking in the set before the show begins. There were enough details in Bobby Swenson and Cole McClure‘s set design to keep my eyes busy and delighted as I waited. A large map of Neverland filled the rich blue floor. From the floor rose a slatted platform in hues of blue with warm splashes of red, yellows, and violets. On top of the platform were additional platforms that could become nursery beds, nooks and crannies for lost boys, or rigging on the Jolly Roger. The wall behind the platform was the same vibrant blue of the floor with gears and cogs scattered across it. A single large gear was mounted in the middle of the stage floor with the moving hands of a clock projected across its face. Clocks and moving cogs were also projected on the floor and walls while the sounds of the interior of a clock tower filled the room.  Soon the clock bell tolled out the start of the show. As the show began I was drawn into the chemistry of the Darling family. As the children played at swordplay their mother, played by Angela Chatelain Avila, joined in the fray with a playful flourish. I had never seen Mrs. Darling in such a down-to-earth portrayal before, and I absolutely loved it. She is the mother every child wishes for, with a mouthful of kisses and hand that tosses a wooden sword to an eager child. The family dynamic continued to grow as Nana, played by Nick Grossaint, and Mr. Darling, played by David Smith, entered the scene. I especially enjoyed the moment when Mr. Darling and Nana were attempting to get Michael, played by Joseph Paul Branca, to take his medicine. Mr. Darling and Michael ended up in battle of wills as they both tried to get the other to take the medicine without taking it themselves. Branca did superbly depicting a little boy who refused to go to bed or take his bath; I felt like I was observing the same strategies my own toddler employs to delay bedtime. I also enjoyed the moments when the family rushed to comfort Nana and Mr. Darling had his own little temper tantrum. Peter Pan, played by Josh Valdez, had the perfect attitude of a carefree, cocky, and mischievous boy. As he came flipping and tumbling on stage there was a noticeable increase to the already high energy in the room. Perhaps my favorite was Peter’s interaction with his shadow and his musical number “I’m Flying.” I’ve seen various ways of portraying Peter’s shadow, but I believe this is the first time I’ve seen his shadow actually be another actor (Jordan Dahl). Their performance during “I’ve Got To Crow” wasn’t just a simple acting exercise of mirroring each other, but rather an intricate choreographed routine of dancing, flips, and lifts (choreography by Dave Tinney). The choreography of this scene was the perfect introduction for the flying scenes. I was curious to see how the flying scenes would be accomplished in this small black box theatre. For some directors this would be a huge obstacle, but for Tinney it was moment to showcase his abilities. Using cast members other actors and dance lifts, Peter and the other children were lifted into the air as though they were flying unaided. The scene was so well executed that it was a well choreographed dance rather than cheesy attempts to compensate for the staging difficulties. It absolutely worked. And there were so many scenes that worked well. I chiefly enjoyed the mermaid scene with its synchronized swimming on rolling chairs, also had me rolling with laughter. I also “Hook’s Tango” and “Hook’s Tarantella,” but I found Peter and Hook (played by David Smith) performance of “Oh My Mysterious Lady” to be most entertaining. I often find with Peter Pan productions that one character becomes the sole focus of the productions. Often it is Hook, Pan, or Wendy that command the stage. This production was the most well balanced performance I have seen. No one character stood out more than the others, but rather they were all equally strong.

The overall design motiff for this production had a steampunk flavor in the costumes, set, lights, and sound. Gears, cogs, and victorian styled images were scattered across the set and costumes. The costumes, designed by MaryAnn Hill, were perfect for the close up setting of this small theatre. I loved that there were images on costumes of hot air balloons, acorns, and compasses. Color played such a vital role in the design choices. Rich jewel tones were found everything from the floor, to Hook’s coat, to the lights on the map of Neverland. Cody Swenson‘s light design was especially prominent during the “Neverland” number when the Neverland map suddenly popped off the floor in a flood of colorful lights edged in small white lights.

Everything about Peter Pan, from the technical aspects to the choreography, to the singing and acting worked solidly together to create one united piece. Fans of any version of Peter Pan will love the current production of this show at Hale Center Theater. Don’t let this chance to see a great show fly! 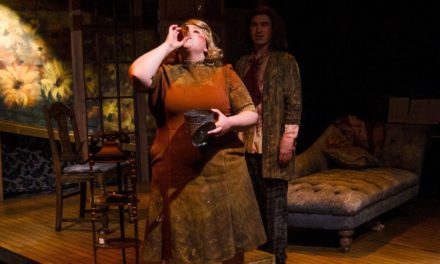 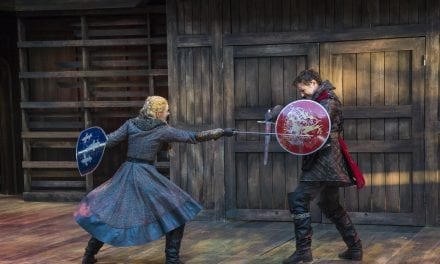 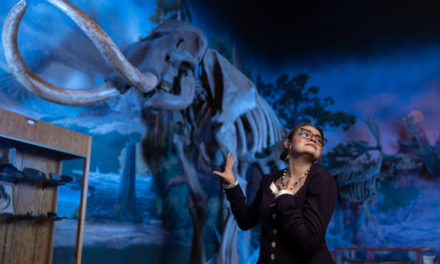