A CHARLIE BROWN CHRISTMAS in Magna is a welcomed holiday option

MAGNA — The Empress Theatre’s production of A Charlie Brown Christmas is a 2013 stage adaption written by Eric Schaeffer of the made for TV cartoon of the same name. In addition to the traditional story told in the TV show, there have been a few traditional Christmas songs added to the production to bring in the spirit of the season. The production, while not without flaws, was a nice alternative to the various local productions of A Christmas Carol and an excellent choice for younger audiences. One of the best parts was that as the audience arrived, young children were invited to write a letter to Santa. My own daughter was excited about this, as were many of the other children in attendance. Many of the cast was in the lobby helping the children complete these letters and then put them in a mailbox for Santa. This was certainly a nice touch.
As the audience was seated into the auditorium, concessions were being sold from Lucy’s advice booth, again, a fun addition. There were many children that giggled as they went to go and buy their treats.

The Empress often encourages donations when attending their productions, and this night, Snoopy was carrying a donation box. Whenever a person would submit a donation, Snoopy would cue the sound people, and music would start, with Snoopy then dancing. I saw many children begging for a dollar to make Snoopy dance, so this was also an intelligent choice for the theatre.

Once the show began, I would say that it was cute, but not rather inventive. It seemed a good mimic of the TV show, but little more than that. Most of Charles M. Schulz‘s characters were portrayed in the same way as on TV. The scenery was fun, if traditional for the Peanuts gang. I found myself most impressed with Sally, played by Chalese Craig. She was very entertaining in her portrayal of the obnoxious little sister, and I especially laughed at some of her physical mannerisms. Whenever the main song would play and all the characters began to dance, I would find myself being drawn to both Sally’s dancing and her humor.

The music in this show was not what I have come to expect from the Empress Theatre. Often I have found the music to be one of the strongest elements in their shows. However, for this production, it felt almost as if the music had been put together last minute and had not been rehearsed much. This was a bit surprising as most of the songs were familiar Christmas carols. I confess that there was not any that stood out as strong numbers or performances, and I think the show might have been better served without music at all.

Having said that, attending the show with two children ages 8 and 4, they both sat through and enjoyed the entire performance, and stated after that they had a fabulous time. So if you are looking for a good Christmas production for younger audiences, look no further than The Empress Theatre’s A Charlie Brown Christmas.

A Charlie Brown Christmas plays at the Empress Theatre (9104 W. 2700 S., Magna) every Monday, Friday, and Saturday at 7:30 PM and Saturdays at 2 PM through December 20. Tickets are $10. For more information, visit www.empresstheatre.com. 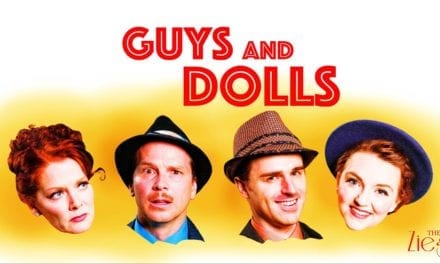