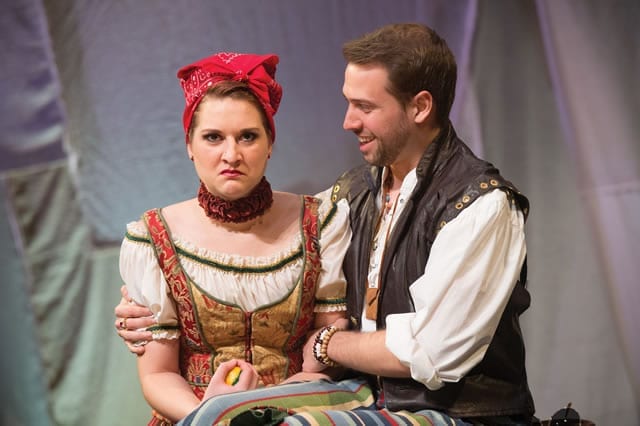 SALT LAKE CITY — The Taming Of The Shrew is by far one of my top favorite Shakespeare plays. With witty humor and a cast of out right hilarious characters, the play is a natural introduction for young audiences into the world of Shakespeare. The story involves Petruchio and his wooing of Katherina, who is the daughter of Baptista. Katherina is a headstrong young woman with little desire to fall in Petruchio. Her highly desirable younger sister Bianca is not allowed to wed until her elder sister Katherina is married. Petruchio’s firm hand and mind games toy with Katherina until she finally becomes the obedient bride he desires. The Utah Shakespeare Festival’s touring production is a condensed 80-minute version of The Taming of the Shrew. Intended for younger audiences in middle and high schools in the western states region. It serves as an educational tool to introduce young audiences to some of Shakespeare’s greatest works. Director Shelly Gaza deserves high accolades for this production, as it was well directed for its intended audience. Her seamless blend humor and the Shakespearean language made it a real winner among the young audience.

The opening scene of the show was definitely one of the most unique choices I’ve seen for a Shakespearean play. It combined modern music with the portrayal of silly tricks and costuming. This framed the production and gave it a good staring point. It’s important to note that (uncredited) costume designer did a splendid job of fusing together older historical and accurate costumes with modern and current touches. This was seen is the juxtaposition of bright striped tights with high top converse shoes against embellished blouses and tops. This choice was very good, as it breathed life into a play written hundreds of years ago. Actress Malloree Hill’s portrayal of the sour and curt Katherina was very well done. From the moment she came on stage her character exuded the grumpy and stubborn nature that Katherina keeps for most of the production. Her temper was especially evident in all of her interactions with her suitor Petruchio. With facial expressions and clever lines she immediately would shut down Petruchio whenever he tried his best to woo her. Hill also was very convincing in her shift of Katherina as she becomes the submissive wife towards the end of the production. I enjoyed seeing a gradual transition and not simply the switch of a light, (as I have seen in other productions of The Taming Of The Shrew.

Fellow lead actor Tom Littman was firm and unyielding in his role of Petruchio, espeically towards to end of the show when he and his wife were at his home. Misha Fristensky (who played Grumio/Tranio/Grumio/Zany #1) was superb in all of his various characters; what I enjoyed most about his performance was that there was an obvious shift each time he portrayed a different character. Whether it was Fristensky’s stance, vocal projection, or simple personality quirks, Fristensky really developed his roles. Fristensky also had an abundance of physical humor. Kaitlin Mills (who played Bianca) was very good in her role of Katherina’s younger, more desirable sister. Mill’s high voice and almost childish behavior contrasted nicely to Hill’s cynical representation of Katherina. Fellow actress Tetrianna Silas (who played Baptista) gave an adequate performance; while I enjoyed the responsive humor she provided towards the end of the production, I failed to see more of the parent figure in her.

The set and stage design was very appropriate for a touring production for young audiences. It included a large patchwork sheet, a few large trunks, a couple of ladders, as well as various small props. The actors did a good job of using these items to represent necessary furniture and props (such as a table, chair, etc.) I also credit technical director Elizabeth Marquis for good fusion of the modern music in between the various scene changes.

Overall, The Taming Of The Shrew is an excellent production. With loads of humor (both physical and spoken) and zany costumes, the production is a good tool to introduce young audiences to Shakespeare.

The Utah Shakespeare Festival tour of The Taming of the Shrew plays at various locations throughout Nevada, Arizona, and Utah through April 18. For a full tour schedule, visit www.bard.org/education/tourschedule.html#.UzX9lYXeR_4.