SALT LAKE CITY — I’ve missed theatre. I haven’t felt brave enough to attend a production during the current health climate. Recently, however, I had the opportunity to review the University of Utah‘s virtual production The Night Witches by Rachel Bublitz and directed by Alexandra Harbold. I had been skeptical of the capability of virtual production to be as effective as traditional theatre settings, but I am so grateful I took the chance with The Night Witches. It filled a hole in my theatre-loving heart while making me miss in-person productions even more. 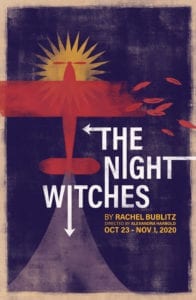 The Night Witches focuses on the efforts of the Soviet Union’s 588th Night Bomber Regiment during World War II. These women flew in planes made of plywood, canvas, and little else in order to drop bombs on the enemy camps every 15 minutes throughout the night. The women trained each other with mechanics becoming navigators, navigators becoming pilots, and pilots becoming commanders. To pass the time in between missions, the women embroidered tokens for one another. The Night Witches story starts as two new navigators, Vera and Nina, prepare for their first night of flights.

Vera, played by Lina Boyer, is especially nervous about her mission. Vera joined to be a mechanic and to help provide for her family; becoming a navigator was not in Vera’s comfort zone or plans. Boyer was an excellent choice for the role. Boyer did well at portraying Vera’s nervousness while still showing the character’s strengths. Vera contrasted nicely with her pilot, Serafima (played by McKinley Barr). Yet the teamwork of the two-woman team was evident during their mission that night.

I would have liked to have felt more comradery between Vera and Nina (played by Chessie Hsieh) in the first half on the production. It wasn’t until Nina was anxiously awaiting Vera’s return that I began to see that there was a friendship between these two girls who had worked together as mechanics and then went through navigator training together. The emotions expressed by both characters after the night’s flights began were moving, and they would have been more powerful if that relationship would have been more present beforehand. Granted, the format of not actually being able to physically interact with each other would make this portrayal difficult.

One character I particularly enjoyed was Valentina, played by Talia Heiss. Valentina was strong, lively, and animated in all that she did. The character brought humor and light to the show. Valentina was the woman that I’d have sought out for comradery and friendship, to be brave when my bravery was running low. Of all the cast members, Heiss felt the most comfortable on screen. Heiss seemed to reach pass the barriers on being physically separated, making me forget she wasn’t in the same room as the other actresses. 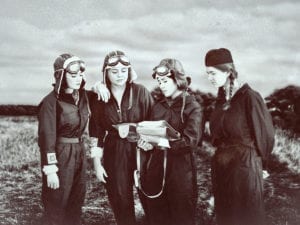 From left to right: McKinley Barr as Serafima, Samantha Nakken as Tatyana, Francesca Hsieh as Nina, and Lina Boyer as Vera. Photo by University of Utah Department of Theatre Todd Collins. Photo manipulation by Aaron Swenson.

For this production, each actress was in a different location and was connecting over the internet. Each actress had a simple black background to unify their space and to create a feeling of oneness. Simple props and coordinated efforts helped to create an environment that felt connected in spite of the separation. The current world challenges has forced companies to become creative in order to survive. The University of Utah and director Harbold have risen to the occasion and passed with flying colors. This production still had the charm of live theatre while being able to be viewed from the comforts of home. This production wasn’t just a ramshackle attempt; it was well rehearsed and well directed. It had well designed costumes (by Mae Hinton Ward) and simple props (by Arika Schockmel) that helped all the cast members create a unified plane together on the scene while in their own rooms. I was impressed with the ability of each actress to not only act her part but also to act as if she was standing next to the other actresses on stage. Sure, moments where things didn’t line up perfectly occurred, but it didn’t distract from the production as a whole. I also appreciated that there were captions for the entire production; sometimes I wish traditional theatre could have captions.

If you have been skeptical of watching a live streamed production, this show is the show to take a chance on. The script is delightful, the cast is charming, and tech pulls it all together (media design by Gavin Yehle). Hsieh did amazing in her position as the dramaturg, and you can find some great resources to strengthen your knowledge and connection with this production on the University of Utah Theatre Department website. For University of Utah students and for Utah theatre teachers and their students, there is a possibility of viewing the production for free. I do wish I could watch these strong performers in a traditional setting after seeing them do such a splendid job in an untraditional setting. This production is well worth support and is appropriate for audiences of all ages, but is geared toward middle school ages and older.

The University of Utah production of The Night Witches plays as a live event through November 1, 2020, on Thursdays, Fridays, and Saturdays at 7:30 PM and Saturdays and Sundays at 2 PM. Tickets are $5 and under. For more information, please visit their website.