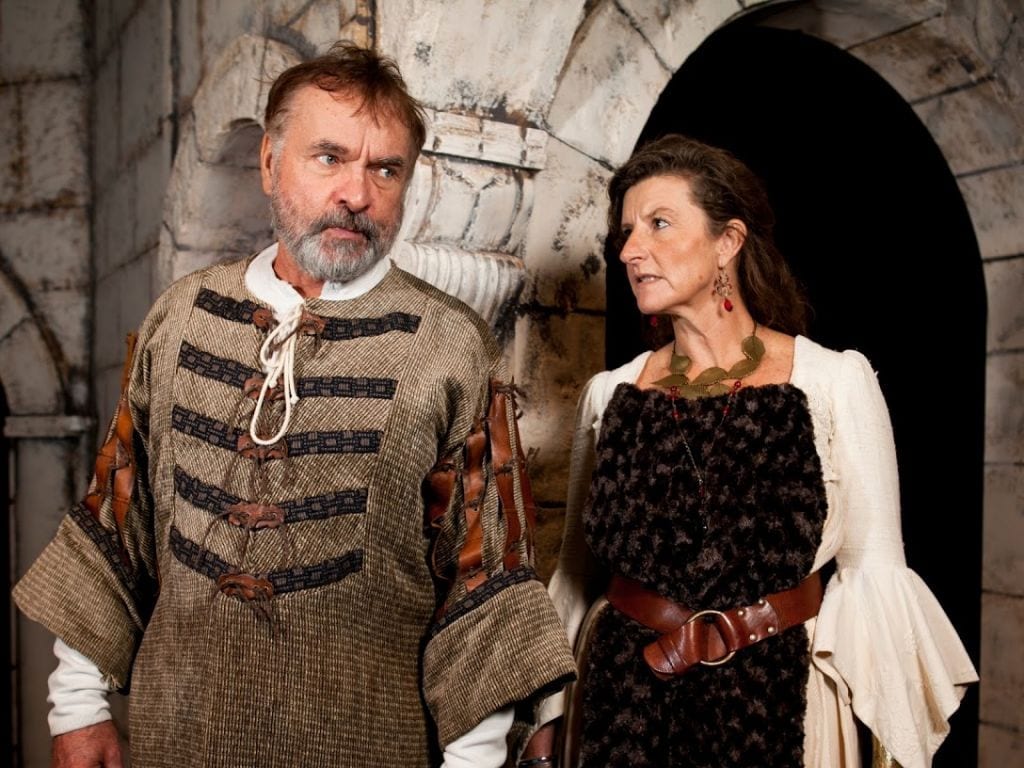 MIDVALE — I was always something of an odd child growing up.  I listened to big band music, old radio shows and loved watching the classics (and not so classics) of cinema shown on the Big Money Movie each afternoon.  That is where I first saw and fell in love with the film version of James Goldman’s The Lion in Winter.  The intrigue and double-dealing of every character in the cast left me awe-struck.  I have great fun introducing others to this wonderful film, but have never had the pleasure of seeing the actual stage version, until now.  Pinnacle Acting Company and The Otherside Players presentation of The Lion in Winter is nearly everything one could hope for from this wonderfully wordy script. Playwright James Goldman created this tale of political double-dealings, betrayal and personal conflicts set against a fictitious Christmas Court at Chinon in 1183. Henry II, king of England has gathered his exiled wife, Eleanor of Aquitaine, their three sons (Richard, Geoffrey, and John), his mistress Alais Capet and her brother (King Phillip of France) for Christmas Court to decide who will become king when he is gone.  Everyone has an agenda and all seem to be working at cross purposes to achieve their desires.  It is a very witty and multi-leveled plot.  The real meat and fun of the script comes in the machinations of Henry and Eleanor to see that their own personal preference for king is decided, and that they will gain their own legacies.

To do this play right, a director needs two lead actors who can display the power, love, hate, and passion of two great lovers and eternal enemies.  Henry and Eleanor are that infinitely theatrical couple who have gone from deep, intense love for each other to a bitter hatred and desire to achieve decisive victory of the other.  Morgan Lund as Henry and Teresa Sanderson as Eleanor sizzle in their scenes together.  Lund portrays Henry as an aging, yet vital monarch desperately struggling to maintain his legacy while fighting the only “war” he has left to himself, a deeply personal and destructive psychological war with his family.  Sanderson portrays Eleanor as an aging beauty who still has the power and cunning of woman who has become the equal of Henry and a major power in a male-dominated world.  Both actors show such boundless gusto in their scenes together.  The second act scene together in Henry’s bedchamber they are reliving their past love is electric to watch.  Lund and Sanderson are so charge their characters with this passion that I can feel the emotional electricity practically arcing between them.

Director L. L. West has assembled a capable cast to support these two excellent leads.  First and foremost is David Hanson as Richard.  Hanson is a large, imposing actor with a wonderfully deep baritone.  He is commanding and powerful as the man who will be known forever as Richard the Lionheart.  He makes strong choices as Richard and yet has such heart especially in the interesting character reveal at the end of the first act.  To say more would spoil the unique twist, but Hanson shows genuine emotion here and in the scenes he shares with Sanderson.  The rest of the cast is fine, but not as well defined.  Bobby Cavalier’s portrayal of John comes off almost too young.  John is supposed to be 16; he is described as spoiled and weak, but he is still the son of a king.  Cavalier’s John is almost impaired, which was noticeable enough that I didn’t believe that Henry would ever consider entrusting the crown with child for a second.  The role of Geoffrey this night, usually portrayed by Jared Larkin was covered by Connor Montgomery.  He was a very scheming, devious Geoffrey, but just didn’t seem to click into the dynamic of the cast.

Set design by Grady McEvoy fit the time period and was versatile in depicting the various locations in Chinon castle.  Scene changes were handled quickly and efficiently and kept the pace of the show going strong.  Lighting designer Marya Smith did well with the limited lighting resources at Midvale Performing Art Center.  Especially effecting was the lighting in the aforementioned second act scene between Henry and Eleanor.  It created a very cinematic focus and intimacy for that scene.  Costuming was coordinated by Melanie Nelson, and while period appropriate, there were some strange choices made.  A very bizarre cowl given to Geoffrey was odd and seemed out of place, and the cloak given to Richard was just bulky and instead of accentuating his physical stature, made him look hunched over and hid his arms through most of the evening.

Pinnacle Acting Company has a history of producing thought-provoking theatre.  I know they operate on a limited budget, and that marketing can be expensive.  Hopefully they can find the resources to better promote their shows and gain the audience they deserve, especially with such rich performances as given by Lund and Sanderson.

The Pinnacle Acting Company and The Otherside Players production of The Lion in Winter plays at the Midvale Performing Arts Center (695 W. 7720 S., Midvale) on Thursdays through Saturdays at 7:30 PM through November 17 and on November 17 at 2 PM. Tickets are $12-$15. For more information, visit pinnacleactingcompany.org.

Morgan Lund and Teresa Sanderson as Henry II and Eleanor of Aquitaine in Pinnacle Acting Company’s production of The Lion in Winter. 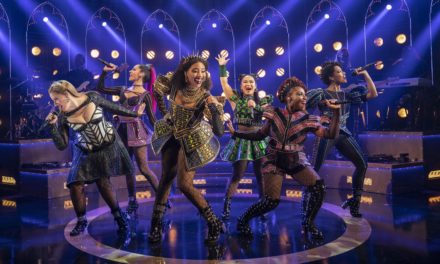 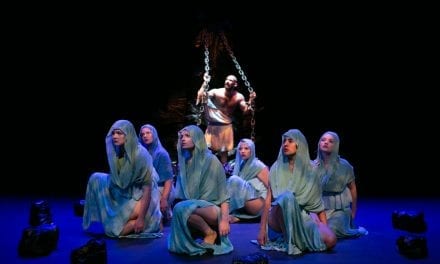