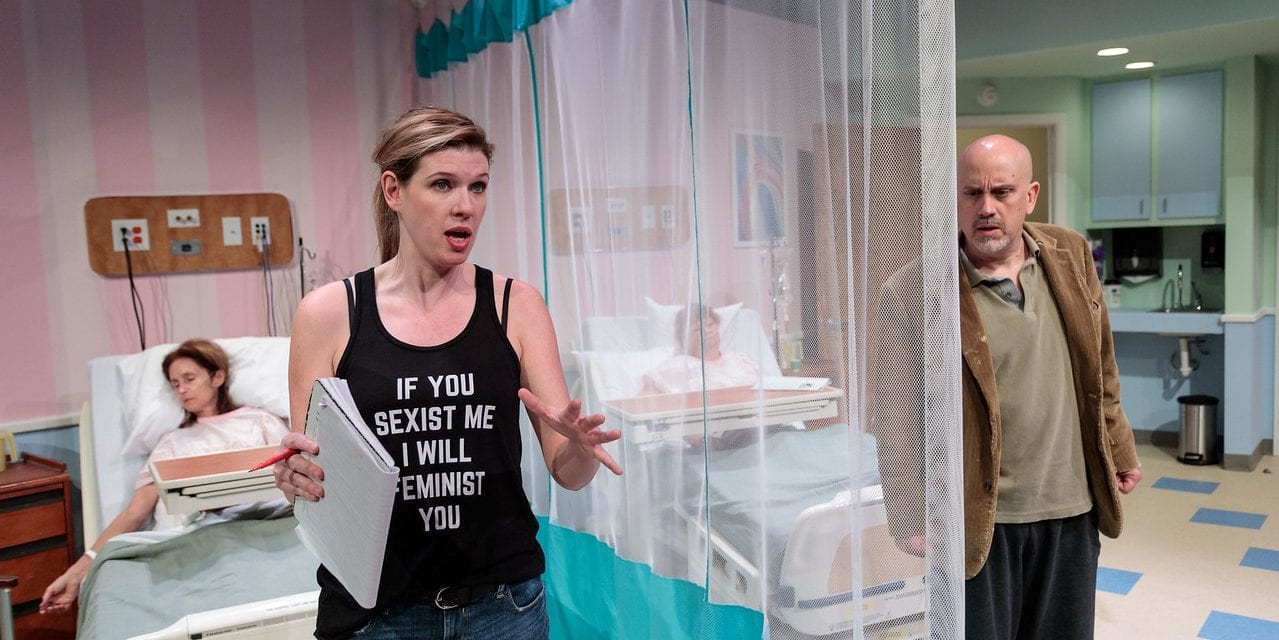 SALT LAKE CITY — A Funny Thing Happened on the Way to the Gynecologic Oncology Unit at Memorial Sloan Kettering Cancer Center of New York City was a funny and enlightening story about the struggles of seeing a family member go through cancer. I laughed and cried along with the performers, and I felt like I was part of the show. Produced by Salt Lake Acting Company, and written by Halley Feiffer, this was a show I will remember for a long time.

The stage is set up with the audience on two sides looking down at a hospital room with two beds, a curtain between, and a bathroom. There were four performers: Chris Duval as Don, Marion Markham as Marcie, Cassandra Stokes-Wylie as Karla, and Annette Wright as Geena. Wright and Markham stay in the beds the whole show, and Stokes-Wylie portrays the criticized daughter of Markham, while Duval plays the doting son of Wright. Duval and Stokes-Wylie’s characters begin their relationship with a completely over-the-top rude fight, and end it with second base. Feiffer certainly knew how to write a climax.

I appreciated the directing of Sarah Shippobotham, as she helped the characters to make each moment just right. For example, when Wright dies, she sits up with such a frightful look on her face, and then collapses back. It was so sudden, I wasn’t sure it had occurred until the next scene shows her bed empty. Another time was when Don and Karla begin making out. They rolled on the floor and he picked her up, and it all seemed like it could be dangerous with the energy they had, but was perfectly safe for the actors. Shippobotham also helped me feel so close to the characters as often they were looking out at me during their lines. 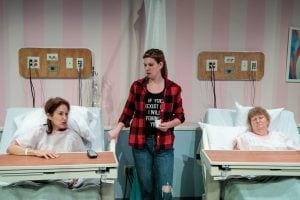 Left to right: Marion Markham as Marice, Cassandra Stokes-Wylie as Karla, and Annette Wright as Geena. Photo by dav.d daniels of dav.d photography.

Duval was fantastic to watch. I liked how though he was significantly older than Stokes-Wylie, his performance reflected a genuinely natural flow in his attraction and physicality towards her. He also was great at switching emotions on the spot, like when he is laughing about his sweats and immediately starts crying about his wife leaving him. Stokes-Wylie was a strong performer to have alongside him. She wore a shirt that said, “If you sexist me, I will feminist you,” which supported Karla’s crude, overpowering attitude toward Duval. Even when they are intimate, she is still spouting information at him while simultaneously sighing in pleasure.

Though Markham was so good at what she did, I hated to see Marcie onstage. Markham had some lines about how selfish Marcie’s daughter was and blamed it on her youth, and yet Marcie seemed to make everything about herself throughout the show. She didn’t have an ounce of empathy to share with her daughter. Having been in a close relationship where the other person couldn’t give me the time of day and expected me to be the perfect one, the attitude Markham so expertly expressed riled me. On the other hand, Wright was fantastic at lying nearly the whole show with such great expressions as she portrayed Geena. Once she actually talked, and I could match her previous facial expressions to her personality, it was enlightening to see that she just didn’t want to be bothered the whole time.

James K. Larsen’s lighting design was bright, and I loved how through the hospital window it looked like daytime outside on the pictures of skyscrapers that had such depth that they looked real, creating the illusion of a hospital room on the nineteenth floor. The colors in the lighting and Thomas George‘s set design were also very hospital-like, with baby pinks and sea-foam green and reminded me of unpleasant experiences I have had in hospitals. I appreciated the curtain being see-through so the audience could see what was going on when it was closed, while the actors pretended it was opaque.

Gynecologic Oncology Unit was so tightly written, with a beautiful rhythm to the dialogue and beats of silence, that all the dialogue seemed to come spontaneously and naturally. There was a cyclic nature to the way the characters would fight (with dirty words and jokes), then things would brighten and then fall back to gloom. It was like swinging back and forth. Another bit of naturalism was in the banter between Geena and Karla; every time the daughter wanted to speak or add something, the mother shut her down.

A Funny Thing Happened on the Way to the Gynecologic Oncology Unit at Memorial Sloan Kettering Cancer Center of New York City is a fantastically performed and directed show full of hilarity and for mature audiences. Salt Lake Acting Company is well-known for quality shows and this dark comedy does not disappoint.

A Funny Thing Happened on the Way to the Gynecologic Oncology Unit at Memorial Sloan Kettering Cancer Center of New York City plays at Salt Lake Acting Company (168 West 500 North, Salt Lake City) Wednesdays through Saturdays at 7:30 PM and Sundays at 1 PM and 6 PM through October 21, with extra performances September 22 and October 13 at 2 PM and September 25 and October 2 at 7:30 PM. Tickets are $15-44. For more information, visit www.saltlakeactingcompany.org.