KAYSVILLE — Does the world need another stage musical based on a successful movie? No, it does not. Which makes the success of Hopebox Theatre’s White Christmas all the more exciting. The musical, created in 2004, sticks closely to the classic 1954 film. After seeing it, I’m convinced it was made for the stage. Chock full of show-stopping musical numbers, dancing, singing, and romance, White Christmas is a magical addition to the holiday stage season.

The plot concerns two Broadway stars (played by Justin Lee and Jeff Erickson), who leave their successful environs in pursuit of two up-and-coming sisters (played by Megan Cash and Melissa Lawyer) after being smitten by their performance. They all end up in a run-down Vermont inn for the winter, where they fall in and out of love (and in again, of course) while staging musicals for bemused tourists. The story is light and fluffy as December snow, and that’s just dandy. Those who’ve seen the film will be in familiar territory. The music and lyrics by Irving Berlin are timeless, including the unforgettable “Sisters,” (“Sisters! Sisters! There were never such devoted sisters!”), “Snow” (“I want to wash my hands, my face, and hair in snow!”) and Mormon Tabernacle Choir favorite “Count Your Blessings.” And of course, there’s Berlin’s “White Christmas” which premiered a decade before in the strikingly similar film Holiday Inn.

In addition to the unfailing music, the show is laugh-out-loud funny, with Lee’s Bob Wallace delivering most of the humdingers. Lee also had the looks and rugged jawline of an old Hollywood star, which was fun to see in the role. Cash and Lawyer are positively luminous as Betty and Judy Haynes. In fact, it’s almost hard to think of anyone filling the roles better. Cash is a powerhouse singer who displayed incredible vocal technique. You know when great singers have complete control even at the end of long phrases and at low volume? Yeah, she’s got that. Lawyer is also a wonderful singer, actress and dancer who enlivened every scene she was in. Their male counterparts might want to put in a little more rehearsal time between performances to approach the ladies’ level. 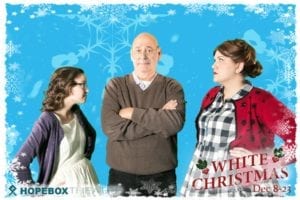 In addition to the powerful female leads, my favorite thing about Hopebox Theatre’s production was the chorus and background actors (or the “Company,” as they’re billed). I’ve never been to a performance where everyone on stage is having so much fun. It seemed like the philanthropic mission of the theater was bursting like sunlight from everyone onstage. And it wasn’t just their attitude either. Technically speaking, they were incredibly active and natural during the inn scenes, and in the army scenes, I was astounded at how sharp they were. In terms of performance, they were heads and shoulders above what I’ve seen before in community theater.

There are more actors who deserve special mention. Lauralyn Malmstrom and Kelsey Porter as ditzy showgirls Rita and Rhoda were an absolute hoot. And how funny was Daylen Bills as monosyllabic yokel Ezekial, a man who “came with the barn” the crew performs in. His take on that simple fella almost stole every scene he was in.

While a performance at Hopebox might seem like others community theaters at first (the atmosphere reminded me of the old Pages Lane theater, but with much nicer chairs), its mission is more than to entertain. In the words of the pre-show announcement, it exists to “bring hope to families battling cancer through the performing arts.” Each show has a particular beneficiary to whom it is dedicated, and donations are encouraged throughout. This is marvelous. The world needs more Hopebox theaters. Here we have an establishment that is not only enriching the actors and the audience through art, it is helping cure people of cancer through art (and donations) as well. If karma is real, than in 10 years Hopebox will be building its own $65 million juggernaut like the that just opened off I-15 in Sandy. 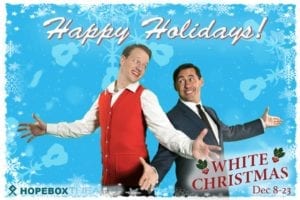 This production (directed by Todd Wente) does differ from the film in a few ways, some more enjoyable and palatable than others. The inn busybody is now a forgotten Broadway star, which is a fairly fun little side plot. Katelyn Johnson certainly made the most of her performance, going all-out on her big number “I’m Happy.” Taya Christensen is also radiant as a precocious and precious 12 year-old with musical ambitions of her own. There were some added plot contrivances in David Ives and Paul Blake‘s script that I didn’t care for, though. One was the old if-you-don’t-know-what’s-wrong-I’m-not-going-to-tell-you shtick, which was so artificial and strung out that I almost wanted to scream “This is dumb! Nobody does this!” And one technical note I hope the theater can address is the inexplicable wardrobe of Ezekial’s barn buddy, wearing church clothes (!?) with this flannel when a simple t-shirt and jeans would do. But these things didn’t distract too much from the evening.

Stop reading this review and buy tickets to Hopebox. Then empty your wallet when you’re there. PayPal, Venmo, do whatever it takes. Support people with cancer and have a good time doing it.

White Christmas plays at the HopeBox Theatre (1700 S. Frontage Road, Kaysville) Fridays, Saturdays and Mondays at 7:30 PM and Saturdays at 2 PM through December 23. Tickets are $10-15. For more info, visit www.hopeboxtheatre.com.