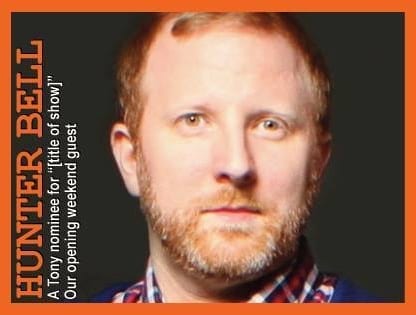 Utah Repertory Theater Company will stage the Utah premiere of the Broadway musical “[title of show]” Nov. 7-16, 2014, at the Sugar Space Studio Theater in Sugarhouse and Nov. 21-22 at the Covey Center in Provo.

To celebrate opening weekend, the company has invited its Tony Award-nominated writer, Hunter Bell, as a special guest. Theatergoers at the opening performance on Friday, Nov. 7, at 7:30 p.m. will be able to attend a post-show reception with Bell.

Additionally, Bell will conduct his workshop, “Die, Vampire, Die: A Musical Theater Workshop with Hunter Bell,” on Saturday, Nov. 8, 10 a.m.-noon. The public is invited to this ticketed event. (“Die, Vampire, Die” is a song from the “[title of show]” score, which defines a vampire as “any person, thought or feeling that stands between you and your creative self-expression.”)

Also, Bell will participate in a post-performance talkback following the Saturday, Nov. 8, matinee performance at 2 p.m. The talkback event is open to all matinee ticket-holders.

“We’re honored to not only bring ‘[title of show]’ to Utah, but to also host Hunter Bell for our opening-night reception, a talkback and invite theater enthusiasts to a musical theater workshop,” said Johnny Hebda, Utah Rep’s artistic director and “[title of show]” producer. “This show is all about creativity—and friendship. With humor, perseverance and imagination, friends can accomplish anything.”

“You’ve probably never seen a musical like this before,” says Austin Archer, who plays the Hunter role in this production, a character Hunter Bell created and played in the Off-Broadway, Broadway and national tour productions. “If you’re a theater junkie, see this show. If you’re an artist at all, see this show. If you can relate at all to having a goal, setting it, and seeing it through to completion, see this show. Also, ‘[title of show]’ chronicles its own inception, and then it’s the (mostly) true story from a New York living room to opening night on a Broadway stage.”

Jonathan Scott McBride, who plays the Jeff character, adds, “‘[title of show]’ explores the beauty of the creative process, the power of friendship, and the importance of finding your place in the world and becoming ‘part of it all.’” The story of “[title of show]” began when two musical theater fans Jeff and Hunter learn of a new musical theater festival accepting submissions. They decide to write their own show with the help of their friends Susan and Heidi. Eventually, Hunter suggests what to write about: “What if the first scene is just us talking about what to write? We could put this exact conversation in the show,” he tells Jeff, and they make a pact to meet the festival’s deadline and write a new musical.

“[title of show]”—taken from the space on the festival’s application form—follows Jeff, Hunter, Susan and Heidi on a story of self-belief, risk-taking, true partnership and a love of musical theater.

So, yes: The title of this show is “[title of show].” The show won two Obie Awards and was Tony-honored as a Best Book of a Musical nominee after the Broadway premiere that became an unlikely but well-deserved hit.

Proclaimed as “genial, unpretentious and far funnier than many of the more expensively manufactured musicals that make it to Broadway these days” by The New York Times, “[title of show]” is a zany, irreverent and heartwarming musical unlike anything you’ve ever seen.

Utah Rep is thrilled to stage the Utah premiere of “[title of show].” We are sure you will enjoy meeting each of the friends in the show’s cast and production team.

The production of “[title of show]” features Austin Archer as Hunter, Dee-Dee Darby-Duffin as Susan, Jonathan Scott McBride as Jeff, and Megan Shenefelt as Heidi. Directing is Jason Bowcutt and Kevin Mathie is musical director.

About Hunter Bell and Jason Bowcutt

HUNTER BELL (“[title of show]” Book Writer) Hunter earned an Obie Award, a Drama League nomination, and a Tony nomination for Best Book of a Musical for the Broadway musical “[title of show].” Other credits include books for “Now. Here. This.” (Vineyard Theatre), “Found “(Atlantic Theater), “Silence! The Musical” (Lucille Lortel Theatre), “Bellobration!” (Ringling Bros. Circus), “Villains Tonight!” (Disney Cruise Lines), “Other World,” and “Julie Andrews’ The Great American Mousical.” He is a co-creator of the web series “the ‘[title of show]’ show” and has developed television with ABC Studios. Hunter is a proud graduate and distinguished alumnus of Webster University’s Conservatory of Theatre Arts, a member of the Dramatists Guild, Writers Guild, a MacDowell Fellow, and a board member of the Educational Theater Association.

JASON BOWCUTT (Director of Utah Rep’s production of “[title of show]”) Jason directs his first project with Utah Rep. He is friends with the “[title of show]” playwright Hunter Bell and composer Jeff Bowen and he was lucky to see “[title of show]” at every stage of production in New York and had the pleasure of working with Hunter, Jeff, and Susan Blackwell (who created the role of Susan in “[title of show]” and hosts “Side by Side by Susan Blackwell”) through an organization that he co-founded called the New York Innovative Theatre Awards. He fell in love with their style, humor and spirit and is truly thrilled to have had the experience to work on this extraordinary musical. In Utah Jason has previously directed “Adam & Steve” and “The Empty Sea for Plan-B Theatre Company, “Reasons to Be Pretty” for the U of U Theatre Lab, “Well for Pygmalion Productions” and will be directing the upcoming Script-in-Hand production of “Marry Christmas” for Plan-B Theatre Company. Jason has acted and directed in New York and across the country. Theatres include Guthrie Theatre, McCarter Theatre, Shakespeare Theatre, Signature Theatre, Cincinnati Rep, Rep Theatre of St. Louis, Pioneer Theatre Company and Off-Broadway’s John Houseman Theatre. Jason is the Community and Performing Arts Coordinator for the Utah Division of Arts and Museums. Before joining the division, Jason was one of the Co-Founding Executive Directors of the New York Innovative Theatre Foundation, a community-building organization for New York City’s Off-Off-Broadway Theatre community. Jason’s education was in theater and he spent many years working in New York and around the country as an actor, director, and producer.