SALT LAKE CITY — What does a 71-year old theater legend with a knighthood and $902 million net worth do? Whatever he pleases, that’s what. And in 2015, it pleased Andrew Lloyd Webber to secure the rights to the 2003 film School of Rock and turn it into a stage musical. So let it be written, so let it be done! The national Broadway tour currently buzzing through Salt Lake City on a 6-night stay provides an evening of amiable entertainment, highlighted by some talented young musicians. It’s a politically correct, focus-group approved Broadway spectacular that does no harm, even if it has no reason to exist and doesn’t dramatically improve the film version.

The plot revolves around a washed up rock slacker named Dewey (played by Merritt David Janes), who cons his way into a teaching job to pay rent. When he discovers his fifth graders have musical talents, he turns them into the rock band of his dreams, so he can finally climb to stardom “on the top of Mount Rock.”

While Janes is less of a ham than Jack Black (who isn’t?), Janes’s performance is definitely influenced by the film role. As the stuck-up principal, Lexie Dorsett Sharp plays extremely close to the original Joan Cusack. It would have been nice to see some fresher takes on these main characters, although both stage actors did admirable work in their roles, with voices, acting and stage presence to match the characters. (Janes was in the original Broadway cast ensemble.)

Surprisingly, the kid characters don’t get so fleshed out; only a few are even given flat personalities that can be summarized in one word (e.g., bossy, shy, gay, dorky). But, the kids are better actors than the film actors, which is a relief, and the musical smartly shows the their home lives so the audience can see what the kids are really rebelling from: overly demanding dads (no moms for some reason, just dads) pushing them to follow in their footsteps. Another improvement is the key scene where Dewey convinces the principal to let him take the kids to a Battle of the Bands. In the film, he does this by getting her drunk, which is pretty deplorable. This time around, Rosalie has a musical awakening in which she realizes she’s let the joie de vivre fade from her life. Then she makes the conscious decision to let the kids enjoy a concert, just like she did when she was young.

These improvements in Julian Fellowes‘s script are appreciated, but on the whole they feel minor. The original songs are lacking. If rock music was this devoid of melody, it never would have taken off. Just using the sound of surging overamped electric guitars of ’70s or ’80s metal does not a compelling score make. And seeing the kids headbang and “throw devil horns” is cute for a minute, but far from the real rebellious soul of the musical genre.

There are also a bunch of weird, unexpected sections where dialogue is sung like an opera, and none of these work. And the rock score is repeatedly punctuated by preppy snoozers. Sure, it makes sense to set up the school with a crisp marching song, but do we really need a second and third dull faculty song? “Why are there so many boring numbers?” I asked my companion. “A show called School of Rock should not have boring numbers!”

The musical is also confused about time. The kids love Kanye and smartphones, but their main competition is . . . an ’80s hair metal band? Say what? Of course, part of the problem is that rock is deader than dead in 2019, and there are no bands to battle—in the 2003 film, the kids at least had Meg White’s drumming to argue about.

Tech was generally good, but had some snafus. Dewey almost ate it when his desk tipped, and the young actor playing Lawrence (who shall remain nameless to protect his fledging career), couldn’t get a guitar off the wall. It was also hard to hear the lyrics of “When I Climb to the Top of Mount Rock” above the surging electric guitars. That song in particular could use some attention by director Laurence Connor: it was really just Dewey pacing back and forth. Some more stagecraft in it could go a long way.

Anna Louiszos‘s sets were adequate for their purpose. I liked Dewey’s crashpad complete with Star Wars sheets and crates of albums. The most electric part of the night was when the stage transformed into the Battle of the Bands with a full lighting rig and a drumkit on risers. Standard concert stuff, but it made for an exciting finale.

In the end, the idea of Sir Andrew Lloyd Webber teaching us all how to “stick it to the man” is ridiculous. And the songs he cooked up with lyricist Glenn Slater are nowhere close to the freshness and hookiness of the film’s (the best of which “Teacher’s Pet” and “In the End of Time” are rehashed here). “School of Rock” is generally likable, generally family-friendly entertainment, but the only real reason to see this musical instead of the film is the talents of the child actors—which the audience at Eccles audience certainly did adore. Me? I’ll take the movie any day. 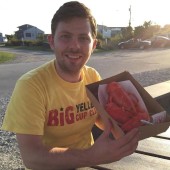