CEDAR CITY — It’s (unfortunately) not that often that you walk out of a theatre performance thinking, “Wow, that was utterly magical.” However, in the case of Peter and the Starcatcher, currently playing at the Utah Shakespeare Festival, there is a sense of magic that not even pixie dust can bestow. When Peter and the Starcatcher opened off-Broadway in 2011, followed in 2012 by its current Broadway run, it quickly became the darling of the theatre community. The announcement that the Utah Shakespeare Festival had received special license to perform the regional premiere led to both a great amount of excitement as well as trepidation. Could this production actually live up to the hype?

I’m thrilled to report that it does. At the base of this fantastic production is a truly genius script, written by Rick Elice and based on the novel by Dave Barry and Ridley Pearson. In an era when origin stories are all the rage, this one about the boy who would become Peter Pan is astounding. The cheeky humor of the script plays off of the Victorian period where it is technically set, while cheerfully embracing a multitude of anachronistic references and witty one liners; all of which meld together to create a hilarious and incredibly brilliant story.

Director Brian Vaughn, together with his talented and committed cast and production team, have done wonders in bringing the genius of this story to life. In a celebration of what makes a theatre production a truly unique artistic medium, as well as incorporating the original childlike nature of the tale, the cast and creative team work together to create a world on stage that invites the audience to use their imagination, as the entire theatre starts off on this adventure. At first there are the layers of the design. The audience’s first exposure to the world is through the creation of set designer Jo Winiarski. With the bows of two ships flanking the stage, I almost felt like I had stepped into the Pirates of the Caribbean ride at Disneyland (appropriate, considering that company’s involvement with the original production). The mostly bare stage is the perfect playground for the rest of the design team and the company of actors to unfold the imaginative world that we will all inhabit for the next few hours. Working in perfect harmony with the set are the excellent lights by Jaymi Lee Smith, the brilliant costumes by Kevin Copenhaver, and the props (uncredited). Because the story shifts locations frequently, most of the locales are created either through the design elements, the bodies of the cast members, or both. In this way, the lights in the production are almost their own character. Smith plays with both light and shadow in order to give excellent focus to the action of stage, deftly shifting us from one location to the next. Copenhaver adds to the world through a mix of costumes that both hint at the real Victorian world, and integrates parts that could only come out of the imagination of a child. As so many of the ensemble members play multiple roles, Copenhaver wisely gives each of the cast members a base costume and then adds layers as needed. I appreciated the fact that the base costumes were always present, as it added to the sense that the audience was living within the imagination. (And, if nothing else, go see this play just for the mermaid costumes that open Act 2). The final design layer that worked to put the finishing touches in the world were the props. Again, as the audience was invited to use their imagination, the cast was able to establish an incredibly creative world with the most ordinary of items. The things that this cast can do, for example, with a simple piece of rope, left me breathless.

Finally, there is the cast. Vaughn, together with choreographer (and actor) Rhett Guter and music director Samuel Clein, pulled together an extremely talented and creative group of actors that work together as a solid ensemble. There is such a high level of energy and commitment to the world that they are creating that it is impossible to not be pulled into it. Having the musicians (Clein as well as Jonathan Nathan), with their underscoring and sound effects, add to the playful, imaginative sense of the world.

While any of the ensemble members are worthy of being singled out for different moments throughout the show, the cast is truly led by the Boy who would be Peter (Guter), Molly (Betsy Mugavero) and The Black Stache (Quinn Mattfeld). Guter gives so much depth to the back story of the Boy, including the heartbreak and hardships that leave him with his severe mistrust of adults and his desire to never grow up, that I wanted to take him aside and hear his entire tale. Mugavero is charming as the over-eager, hyper-intelligent starcatcher apprentice who wants to succeed on her first mission. And Mattfeld is outrageously funny as the Pirate in search of the hero who will be the righteous yin to his villainous yang. Mattfeld is truly delightful, and his sense of comic timing—as well as his commitment to the physical comedy—pushes the entire production to a new level. These three, together with the rest of the ensemble (with stand out moments by Matt Mueller as Mrs. Brumbrake, Aaron Galligan-Stierle as Smee, Chris Klopatek as Prentiss and Matt Zambrano as Ted), have so many brilliant moments throughout the performance that I found myself gleefully anticipating how they were going to manage to creatively one up themselves in the next scene.

If you’re headed to the Utah Shakespeare Festival at any point this summer, please make sure that Peter and the Starcatcher is on your list of shows to see. This imaginative, creative, and wondrous show will leave you with the sense that you have just experienced something truly magical.

The Utah Shakespeare Festival production of Peter and the Starcatcher plays through October 18 in the Randall L. Jones theater on the campus of Southern Utah University in Cedar City. Tickets are $31-$72. For more information, visit www.bard.org. 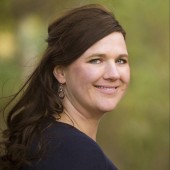